The President-elect’s Doonbeg hotel and golf course report over $5 million in accumulated losses since Trump International took over in 2014. 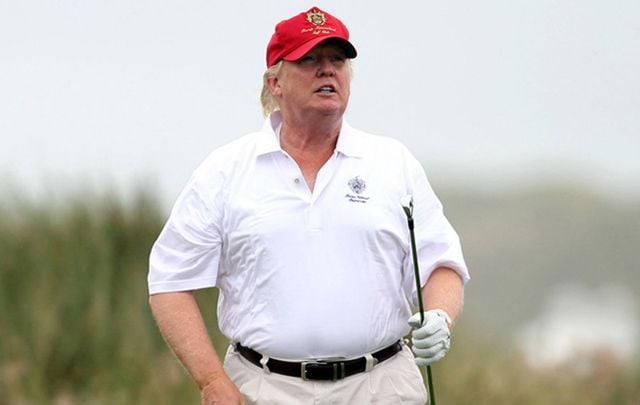 Donald Trump on his Doonbeg golf course which is said to have lost over $5 million since 2014. Getty

Despite the talk in Doonbeg, Co. Clare, of all the investment and employment President-elect Donald Trump’s hotel and the golf course has brought to the town, the Irish installment of the Trump business empire has been far from profitable so far for the real estate mogul.

According to accounts just filed with the Irish Companies Office, Trump International Golf Links and Hotel in Doonbeg recorded accumulated losses of $5.3 million (€5 million) at the end of 2015, doubling the losses reported the previous year.

Acquiring the 400-acre Doonbeg Lodge and Golf Course in 2014 for $9.45 million (€8.7 million), the site was valued at $24.5 million (€23 million) just a year later by the businessman in financial disclosures filed with the Federal Election Commission.

The company noted in the report that the golf course was partially closed to facilitate works during the financial year, limiting its business operation. The hotel has also undergone significant redevelopment and redesign and it is hoped the capital investment in both will increase their profitability in the future.

The site is operated by TIGL Ireland Enterprises Limited, of which the President-elect is the director and sole shareholder. During his campaign, Trump spoke of handing over the reins of the golf course and hotel to his children, referring to the property as “small potatoes.”

Trump’s children--Ivanka, Eric, and Donald Trump Jr--are also directors, the report states, and hope the annualized turnover and profitability of the company will increase with thanks to the money invested in redevelopment.

The future profitability of the golf course may be in some jeopardy, however, with the refusal of Clare County Council to allow the course to build a wall along its coast.

Trump International Doonbeg had hoped to build a 200,000-ton “wall” of rock to protect sand dunes in the coastal golf course from the impact of the Atlantic Ocean, with consultants to the company suggesting the course would have to close in the future due to the heavy impact of coastal erosion. In 2014, storms eroded sand dunes along the coastline by as much as 19 to 26 feet in places but the application was ultimately rejected amidst concerns from local environmental groups on the impact of such a wall on the natural habitat of the area.

Yesterday, in his first press conference since July 2016, his first since defeating Democratic candidate Hillary Clinton in the November 8 election, Trump revealed his plans for his business empire once he enters the White House.

In a move that has drawn criticism from the head of the Office of Government Ethics — which is supposed to help the executive branch avoid conflicts of interest — Trump will not relinquish any of his empire to the control of anybody other than his sons, who will continue to run the Trump Organization in his stead.

While no foreign deals are to be signed during his Presidency, any domestic deals the organization makes will be overseen by a to-be-appointed ethics advisor. Trump will also not prohibit foreign diplomats staying in his hotels, instead suggesting he will give any money made by his hotels during these visits to the US Treasury, a move that would bring down any divide between the Trump Organization’s money and the US government’s money.

The people of Doonbeg were some of the most vocal in Ireland in their support of a Trump presidency and applauded his victory in November, celebrating their link to the next US President.

Congratulations @realDonaldTrump from all the team @TrumpDoonbeg on your new position! @WhiteHouse #MAGA pic.twitter.com/1pYrDTfs9Y