Over 30,000 sign their opposition to the Irish leader visiting the White House on March 17. 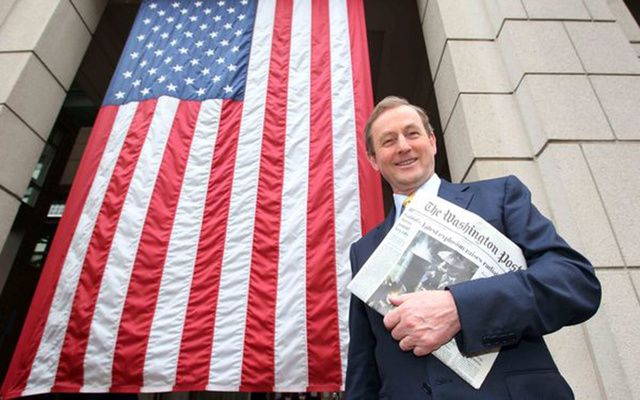 Over 30,000 sign their opposition to the Irish leader visiting the White House on March 17. RollingNews.ie

A spokesperson yesterday confirmed that Irish Taoiseach Enda Kenny will continue with his visit to the White House on St. Patrick’s Day 2017, despite the collection of at least 32,000 signatures in 24 hours calling on the Irish leader to cancel.

"In order to maintain the historically strong links between the Irish and American peoples it is important that the Taoiseach continues to engage with the US President and his administration in Washington around the events of St. Patrick's Day,” a spokesperson from the Office of the Taoiseach said.

"Doing so allows the Taoiseach to outline, in person, his Government's views on a range of issues, including business and economic ties, immigration and other matters of common interest. He will continue to act in the interests of Irish people and to that end, he will raise these matters again this year."

The leader of the Irish Labor Party is calling on Kenny to cancel this trip, however, claiming it would be “humiliating” to Irish people to be associated with President Trump in this way.

Stating that Trump “does not share" Irish values, Brendan Howlin believes that for Kenny to attend the traditional sharing of the shamrock ceremony this March 17 would be to give support to Trump, despite widespread anger and concern in Ireland over the president’s moves to block immigration from Muslim countries and his “extreme vetting” order that has called a halt on the arrival of refugees to the US.

"For decades, Irish Governments have been able to enjoy significant access to senior US politicians in the days around St Patrick’s Day. This has allowed us to raise issues that matter to Ireland, and to Irish people in the US," Howlin said in a statement.

"President Trump does not share our values. Indeed, he is openly hostile to them. He and his team have made clear that he is unwilling to hear or even listen to discordant voices.

"Put plainly, if the Muslim ban remains in place, Enda Kenny should not be boarding a plane to Washington in March. And our Government should be working might and mane to make sure that these policies are not enforced on Irish soil."

Kenny’s confirmation last week that he would visit the White House on St. Patrick’s Day has been defended within his own party, however, while acknowledging that it would be a different celebration to those with presidents past.

Foreign Affairs Minister Charlie Flanagan has also defended the taoiseach stating: "I believe it's very important that the Taoiseach's visit on St Patrick's Day goes ahead. He was specifically invited very soon after the election by president-elect Trump.

“I believe in dialogue, I believe in discussion, walking away from an invitation, to my mind, is not the best way of dealing with international affairs and public issues. I strongly believe that the Taoiseach's visit should go ahead.”

Minister Flanagan continued to express his concern over Trump’s order to ban travelers and refugees from seven Muslim countries gaining entry into the US, which he believes will have "far-reaching implications."

"While US immigration policy is a matter for the US authorities, it is clear that the most recent decisions could have far-reaching implications - both on humanitarian grounds and on relations between the US and the global Muslim community,” Flanagan added, pledging to discuss immigration when he travels to Washington D.C. this week to meet with officials.

The Taoiseach traditionally makes an official visit to the US President around St. Patrick’s Day to engage in an exchanging of the shamrock ceremony as a symbol of the close ties between the countries. The presentation dates back as far as the 1950s to the presidency of Harry Truman.

There's 3 petitions against Enda going to Washington on Paddy's Day:https://t.co/fGjE8TS1Auhttps://t.co/kEloa2HOt0https://t.co/w27JA02oJP

United Against Racism Ireland has organized a protest to take place outside the US embassy in Dublin this Thursday, with over a thousand people expected to attend.

Do you agree with Enda Kenny’s presence in the White House this St. Patrick’s Day? Let us know your thoughts in the comments section.