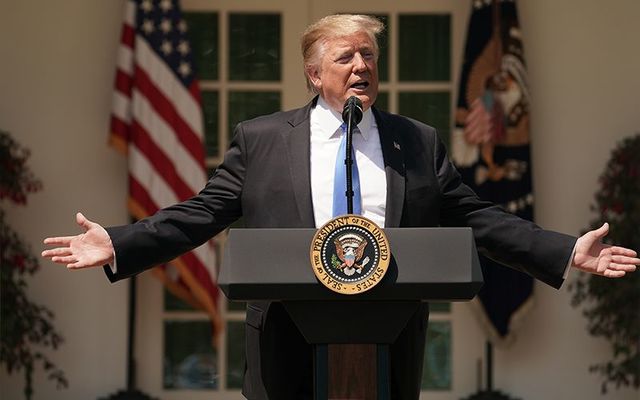 US President Donald Trump in the Rose Garden, at the White House, May 2019. Getty

It comes amid reports that the US Secret Service is in Co Clare to scope out logistics and security arrangements for a presidential visit.

Varadkar quipped that the "US Secret Service mustn't be all that secret" if the media found out about the visit.

“There's a possibility of a visit in June,” he told the Irish Independent.

"The President is going to be in Europe. But we've had no confirmation of it at this stage."

If Trump does visit Ireland he is set to choose between his hotel and golf resort at Doonbeg in Co Clare or one of his Scottish hotels.

He is due in France next month and will make a state visit to the United Kingdom on June 3 to 5, 2019, to mark the 75th anniversary of World War II's D-Day and it is thought he will fit his Irish trip in around these dates.

While in the UK, Trump will take part in a bilateral meeting with embattled Prime Minister Theresa May, who continues to deal with Brexit, the United Kingdom’s exit from the European Union.

After their three-day trip to the United Kingdom, Trump and the First Lady Melania, will travel to Normandy on June 6, at the invitation of the French President Emmanuel Macron, as part of D-Day commemorations at the Normandy American Cemetery at Colleville-sur-Mer.

However, as yet the US President has not released any plans for a state visit to Ireland but did announce on St. Patrick’s Day that Vice President Mike Pence would accompany him.

Over St. Patrick’s Day Trump had expressed that he planned on visiting Dublin before traveling to Doonbeg, in Country Clare, where he owns a hotel and golf course, which is being run by his family.

It’s expected that the US President’s plans to visit the United Kingdom will once again spark plans for renewed demonstrations. Last year thousands of people took to the streets to protest his arrival.

Reports that the US Secret Service is in Co Clare to scope out logistics and security arrangements for a presidential visit. Image: Getty

Campaigners are already calling for the return of the baby “Trump Blimp,” a 20-foot effigy of the US President, which was flown over London’s Parliament Square, according to the Daily Mail.

Already Labour Members of Parliaments have made it clear that they would not welcome the US President.

Are you for or against US President Donald Trump visiting Ireland and why?
Let us know in the comments section below.