As the Taoiseach bids farewell to the UK on Brexit Day, other Irish politicians look at the UK's exit in the scope of the upcoming Irish general election. 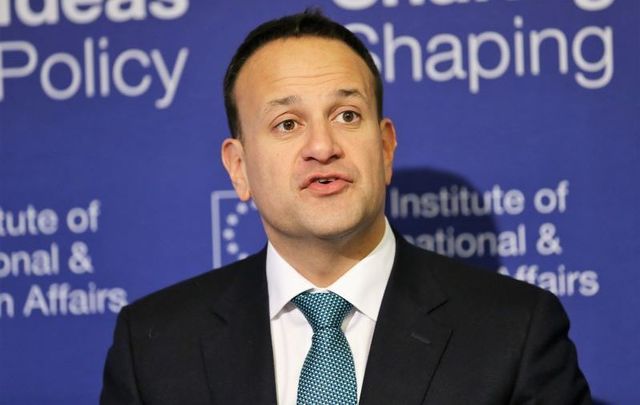 Taoiseach Leo Varadkar speaking at the Institute of International and European Affairs in Dublin on January 31, Brexit Day. RollingNews.ie

With Brexit Day finally upon us, Irish politicians are responding, especially ahead of the February 8 general election.

Speaking during an event at Dublin’s Institute of International and European Affairs on January 31, Varadkar said: "Tonight, when the clock strikes 11 pm, the UK will leave the European Union.

"We'll say goodbye to an old friend embarking on an adventure. We hope it works out for them. But if it does not, there will always be a seat kept for them at the table.

Tonight, when the clock strikes 11 p.m. the UK will leave the European Union. We'll say goodbye to an old friend embarking on an adventure. We hope it works out for them. But if it does not, there will always be a seat kept for them at the table. #BrexitDay pic.twitter.com/ybkX70wFZt

Varadkar continued: "I am ambitious about the future EU/UK relationship but I also think we think to be realistic about the dangers.

"We need to start a new relationship between the EU and the UK on a firm and honest footing. And that means a level playing field.

"Today is a bittersweet day for all of us who believe in the idea of Europe," he continued.

"Our sadness, however, is tempered by what we have seen over the past three years. Although Europe was tested it did not break, but came through it stronger and more united than ever.

"Today we are grateful to the European member states for their solidarity and support during the recent Brexit negotiations. It is proof of why small countries benefit from membership of the EU.

"I’m certain, that both Ireland and the EU more broadly - will continue to have an abiding friendship with the UK, a real partnership in terms of politics, security and the economics.

"I look forward with confidence to the future of Ireland and the EU after Brexit," Varadkar continued.

"I do not underestimate the challenges and risks but believe we can meet that working with our European partners we can build an ever closer, safer, prosperous and sustainable future for us all."

Varadkar became Taoiseach of Ireland in June 2017, just under a year after the United Kingdom narrowly voted to exit the European Union. His tenure saw two different UK Prime Ministers - Teresa May and currently Boris Johnson - attempt to navigate through what turned out to be immensely choppy waters of Brexit.

The main sticking point of Brexit negotiations emerged to be the land border between the Republic of Ireland (an EU member) and Northern Ireland which, after Brexit, will no longer be a member of the EU despite voting to ‘Remain.’

In the wake of Varadkar's speech on Friday, Micheál Martin, the head of the Irish political party Fianna Fáil, accused the Taoiseach of calling for a general election in order to coincide with Brexit Day.

Martin said: "When you think about this. He [Varadkar] had planned this election and the date a way back. It's very clear now that it was all choreographed and he thought he would get re-elected on the wave of Brexit day."

Martin added that Fine Gael, Varadkar’s political party, "have been desperate since the beginning of the campaign to put Brexit center stage... And it hasn't worked.

"They're giving it one last effort today, tomorrow, about Brexit again.

"The fact is the health crisis, the housing issue, are very dominant in people's minds."

Elsewhere, Mary Lou McDonald, the leader of the political party Sinn  Féin who is currently polling in third place behind Fine Gael and Fianna Fail ahead of the general election, attended a protest organized by Border Communities Against Brexit on Friday.

McDonald, who said Brexit Day is “a very sad day” for Northern Ireland after it voted to 'remain' in 2016, has said that a condition for Sinn Féin to enter into a coalition government in Ireland is a reunification referendum.

“What Brexit puts up in lights is the extent to which partition endangers the economy, the society and politics of the whole island. That conversation has to be had about reunification,” she said.