The general election vote will be held on a Saturday for the first time. 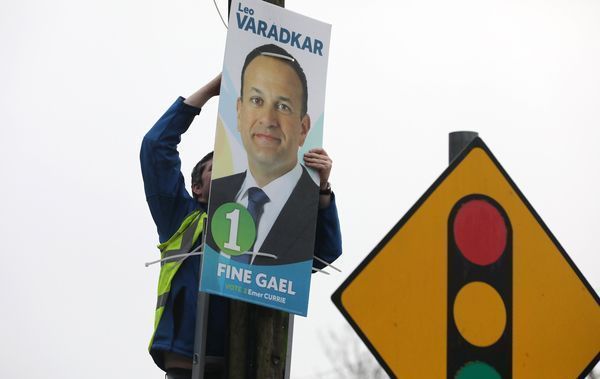 Putting up Taoiseach and Fine Gael leader Leo Varadkar posters in his constituency in Dublin on the day he announces he is to seek dissolution of the 32nd Dáil for a general election. Eamonn Farrell/RollingNews.ie

The Irish leader traveled to Áras an Uachtaráin on Tuesday afternoon to ask President Michael D. Higgins to dissolve the Dáil (Irish parliament) which will remain closed over the course of the three-week campaign before the public head to the polls.

This is the first time that a general election will take place on a Saturday, something the Taoiseach claimed he hoped would help parents, students and those living away from home. He also described the February 8 date as a "window of opportunity" before the next European Council meeting in March.

Here is my speech from the steps of Government Buildings today.

Now is the right time for an election, so we can have a new Government in place for the next phase of the Brexit negotiations, which are going to be just as tough as the last.#LookForward pic.twitter.com/HXEJG9IdD5

"We have a deal on Brexit and Northern Ireland. Our economy has never been stronger; there are more people in work than ever before, incomes are rising, poverty is falling and the public finances are back in order," Varadkar said on Tuesday as he announced the election date.

"As a nation, we have every reason to be hopeful and positive about the future."

The date has been criticized by some, however, as it comes a week before the new electoral register becomes valid on February 15, excluding many young voters who would have been able to cast their ballot for the first time and those who registered to vote in the past eight months.

8-days (6 working days) to source and fill-out and 6-page document. Then get it stamped at your local Garda station, and submitted to your local authority.

Why could the Government not wait one week?

Right now, the only way that people who've "registered" in the past year can guarantee that they're on the register for #GE2020 is to sign the supplemental register. They have nine days before the deadline.

While the election date was speculated for some time, the short campaign began with fury on Tuesday with candidates making the most of the three-week period they have to canvas voters, in what is set to be an extremely close election.

Fine Gael currently leads a minority coalition government supported by independent members and backed by main opposition party Fianna Fáil who made a formal agreement to abstain on matters of confidence and supply.

Here is how the main Irish political parties started out their campaigns:

Sinn Féin want to give workers & families a break, deliver for local communities & stand up for ordinary people

For the biggest public house-building programme in the history of the State, for solutions to the health crisis, for Irish Unity: Vótáil Sinn Féin #1🇮🇪 pic.twitter.com/wNxpxymPqr

Mary Lou is leading “the best team - the A team in this election” but is keeping SF’s slogan coy for the time being #ge2020 pic.twitter.com/TKaejhGV1Y

Fianna Fáil's #ge20 slogan is 'An Ireland For All'.

The day has come! 8th February for the General Election in Ireland. Find out more about your @fiannafailparty candidates here 👇👇👇#GE2020 #AnIrelandforAll https://t.co/n0gUME74xe

We’ve made some good progress since I’ve become Taoiseach. But I know it’s not enough, and we want to do much more. @FineGael has the team, the track record and the plans to build a future we can all look forward to.#LookForward pic.twitter.com/Tox3EBxHVm

Labour launching its election campaign. Howlin saying entering government after the next election will be contingent on policies, not who’s Taoiseach #GE2020 pic.twitter.com/bENmaCT3eF

We’re kicking off our General Election campaign - we are ready to build an equal society. 🌹 #GE2020 #AnEqualSociety pic.twitter.com/aOY75oGC7a

"What are the choices, in this next decade, as to where we want to go as a country? That’s what this election has to be about."

WATCH: Green Party leader @eamonryan will be talking #GE2020 & the need to make this a #GreenDecade on @rtetwip, starting at 11.40pm on @RTEOne. #twip pic.twitter.com/1dqbwtAe1B

Who do you think will come out on top in general election 2020? Let us know in the comments section, below.