Martin Whelan, the owner of a dozen pubs and restaurants in NYC, has partnered with the New York Blood Center to help drive donations during its time of need. 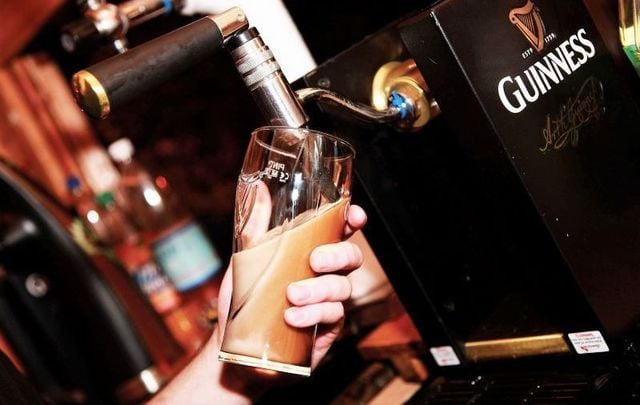 Martin Whelan, owner of a dozen Irish pubs and restaurants in New York through his Stout NYC Group, doesn’t know when – if – his previously thriving businesses will ever return to the way they were pre-Covid, but in the meantime, he’s determined to use what he owns as a force for good.

Whelan has joined with the New York Blood Center, sorely in need of donations, to give free pints of Guinness for those offering their blood.  “A pint for a pint,” as Whelan calls his initiative, kicked off on Monday at his Rivercrest Restaurant in Astoria. He plans to host other blood drives in his establishments in Manhattan, including Stout NYC on West 33rd Street.

“They give you a pint of Guinness when you donate blood in Ireland, so why not here too?” Whelan, the son of two Irish immigrants from Dublin, told the Irish Voice.

He got the idea to organize blood drives while on a run in his Long Island City neighborhood. Seeing a sign for blood donation, he immediately offered a pint of his own “and it made me feel good. I felt like I was doing something positive through all the negativity,” Whelan said.

A huge thank you to everyone who came out to donate yesterday! Because of the amazing success of yesterday’s event and...

He reached out to his business partners with a plan of using their vacant restaurants for future blood drives – all of whom agreed – and the New York Blood Center was thrilled with the support. Donations of blood have plummeted during the Covid crisis “and New York is in dire need,” Whelan says.

“Many of the usual donation places, like churches and schools, are shut down.”

Whelan is perplexed by the lack of a plan to reopen indoor dining in New York’s five boroughs. His establishments employed more than 500 before Covid, but that number is down to 50. One of his restaurants has shut for good; two of them are “on the brink,” he says, while the remainder are fine, for now, primarily because of landlords willing to renegotiate lease terms.

“We are all left scratching our heads. I know we were the epicenter of the pandemic but we have it under control in New York,” Whelan says.

“People ask me if I’m upset by no indoor dining.  And yes, I am, but it’s not a needle mover anyway right now. We cannot make money at even 75 percent capacity.”

Given the flight of residents from Manhattan and empty office buildings, Whelan feels that the time is right for officials to focus on resuscitating the city’s once-booming hospitality industry.

“How can there be any fear in Manhattan – no one is really around anymore,” he says.

“I think about all the people who own little restaurants. That’s the American Dream, to have your own place. They have to be saved.”

Five of Whelan’s businesses have reopened for outdoor dining. Money secured through the Paycheck Protection Program has helped pay employees, and he’s in the process of securing other loans to keep his own dream alive.

“Many of the landlords have been great. I am confident they see the writing on the wall and they don’t want places that will be vacant for good,” Whelan adds.

“Going forward, the governor and the mayor really do have to figure this out.”

Read More: Amidst COVID, Irish in New York City are on the move