While many Irish are packing up and heading home, plenty of others are fleeing New York City for suburbia thanks to coronavirus. 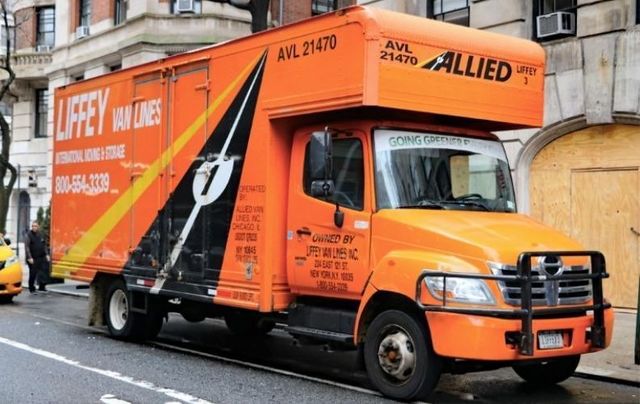 Liffey Van Lines is "flat out" according to its Irish owner.

Debbie McGoldrick speaks with Irish movers and Irish realtors local to New York City about how people are "heading for the hills."

Editor's Note: This article appeared in the August 12 edition of the Irish Voice newspaper, sister publication to IrishCentral.

On Monday morning, August 10, Liffey Van Lines in New York City fielded nine phone calls before 10 am from Irish people looking to pack up their American lives in exchange for a return to Ireland.

Liffey, which ships all over the U.S. and the world, is flat out these post-Covid days, moving people to Ireland and, even more so, out of the city and into the suburbs where homebuyers can get more bang for their buck and, crucially, more open space.

“It’s incredible the number of people who are on the move,” Co Clare native Danny Moloney, Liffey’s founder and president, told the Irish Voice.

“People right now want to get out of the city because they didn’t like being here during the worst of Covid-19. It’s going to take a good while before the city returns to normal. Many people are not prepared to wait around for that.”

The residential rental and sales market in Manhattan continues to plummet, but the misery isn’t spreading in places like Long Island and Westchester, where sales activity is soaring and homes that are priced to sell are often going to contract above asking price.

There’s a combination of factors at play, Irish real estate agents in the Bronx and Westchester tell the Irish Voice – extremely low mortgage rates, the move to remote working and, most of all, the desire for more space in a suburban setting.

“It’s funny. My buyers these days are looking for things like home offices and swimming pools which were never really high on the list before,” Tony Murphy, a real estate broker with Houlihan Lawrence in Westchester, said.

“And these days they are prepared to pay for them. There’s a definite uptick of people leaving the city because they don’t want or need to be there anymore. They want backyards and gardens. They want to just open their back doors and be outside.”

The spring market collapsed in New York when Covid-19 restrictions were at their highest, and both buyers and sellers were in panic mode. But the market outside of the city has roared back says Kieran Dwyer, a broker with Double C Realty in Yonkers and the Bronx.

“We lost the spring, so now we have a bunch of sellers who subsequently put their homes on the market with the summer sellers, and a bunch of buyers who are ready to make the move,” he told the Irish Voice.

“I think Covid has driven demand, but what’s really making a difference is the super-low interest rates. They are under three percent so there’s never been a better time to buy. People who were sitting on the fence about buying, especially renters who have nothing to show for paying rent, all want to reap the benefits of the low rates now.”

Murphy agrees that interest rates are driving buyer demand and making the current market a seller’s one.

“For sure. I just refinanced myself. The rates are incredible and it’s a great time to take advantage of them,” he says.

Murphy’s sellers run the gamut from older folks wanting to downsize, or move closer to their adult children, or perhaps relocate to places like Florida. And Ireland.

“I’ve definitely seen more people wanting to move back to Ireland,” says Murphy, a native of Cullyhanna, Co Armagh. “A couple of years ago that wouldn’t have been as prevalent as it is now.”

Selling during Covid presents challenges, he adds. Never a fan of the open house route, Murphy has been showing his listings to clients via appointment, and would never advise to buy a property solely off internet photos as some desperate buyers have been doing.

“You really can’t do that, unless it is a steal of a deal,” Murphy says. “Houses that are photographed are staged to look great, but sometimes the reality doesn’t match the photos. You’ve got to see and feel a house before buying.

“Sellers are very conscious of having people in their homes,” he adds. “They don’t want 20 or 30 people walking around and touching door handles and countertops.”

Murphy had “seven or eight” new listings last week, an unusual occurrence for the month of August when buyers and sellers are typically in vacation mode. But he’s not complaining.

“We had lots of time off during the spring, and now there aren’t enough hours in the day. I can’t tell you how long this is going to last but it won’t be a long time. If we can get the fall out of it that would be great. It will be a changed market by spring if not sooner, and interest rates will rise. So it’s a seller’s market now for sure.”

Read More: How New York families are coping with the uncertainty of a new school year

Work from home has been one of the most dramatic changes ushered in due to Covid-19. Many of Dwyer’s clients are no longer looking to have homes near mass transit.

“I’ve sold many houses for people who are moving north to get more for their money. They can work remotely from home and they don’t need the quick access to the city,” he said.

“Before, trains and buses were a primary concern. Now people can go to places like Yorktown and Mahopac and not worry about commuting.”

The good news for sellers and brokers? Properties aren’t staying on the market for very long.

“If you price right, you will have multiple offers in one week. Buyers are extremely motivated because of the low-interest rates,” said Dwyer, Bronx-raised and the son of two immigrants from Co Leitrim.

“I’ve definitely seen a big uptick in the number of renters wanting to own as well. And many of my sellers are young couples who started out in Yonkers, and now want to go to towns like Tuckahoe and Ardsley because they have kids and they want to live in better school districts.”

Sean O’Sullivan, from Co Cork, has owned his Yonkers-based mortgage service company, Arlington Financial, for 30 years. When Covid upended the world in March, he thought his firm might not survive the disruption. But now he’s busier than he’s ever been.

“I never expected this level of confidence in the housing market, especially with the rate of unemployment. It doesn’t really add up, but for sure the market is exceptionally strong, fueled by people wanting to leave the city,” O’Sullivan told the Irish Voice.

O’Sullivan sounds a note of caution with regards to mortgage rates, however – they are low, but the devil is in the details.

“Some people come in thinking that they are going to get a 30-year fixed rate for 2.5 percent, and that’s not going to happen,” he says.

“Banks are very worried about things like mortgage forbearance, which was passed into law for Covid and allowed borrowers to defer payments for three months, and they could do this up to four times. So the banks are pricing this into the cost of the loan. A 30-year fixed could wind up being 2.9 percent for a first-time buyer.”

Read More: “An American Irish Story” – growing up in the Bronx, New York

Purchasers should also be prepared for an extreme vetting process before a loan is approved, O’Sullivan adds. Every scrap of necessary paperwork is verified by lending institutions that, he says, are worried that a second outbreak of Covid could be on the horizon.

“There won’t be another housing crash because all of the buyers are so thoroughly vetted now. It’s a very long process and all the boxes have to be checked and double-checked before a loan is signed off on,” O’Sullivan says.

Dwyer also is surprised at the confidence in the real estate market, even as many industries continue to suffer the effects of Covid.

“I never thought three months after Covid that there would be this much confidence in the market. It’s not that stable job-wise, and unemployment is high. I cannot believe that there is this much buyer confidence. I can’t fathom it,” he says.

Though the attraction of Manhattan isn’t as appealing these strange days, “for sure it will come back,” Murphy says.

“But in the meantime, if I had a house to sell I’d put it on the market tomorrow.”

Have you moved due to COVID-19? Let us know in the comments, below