“An American Irish Story” – growing up in the Bronx, New York

Recalling the parties, music, dance and nostalgia of growing up in the Bronx Irish community. 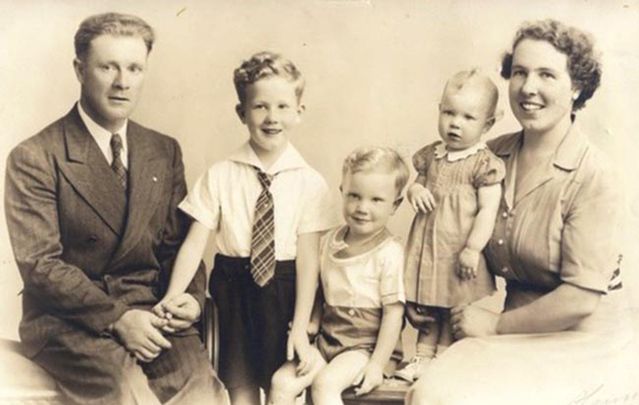 The Scanlon Family, 1943: Recalling the parties, music, dance and nostalgia of the fall of 1961 in the Bronx Irish community. Michael Scanlon.

Michael Scanlon, an English lecturer, is the son of Irish emigrants and grew up in the Bronx, New York. Now aged 65, he has published a book on his life growing up in Irish America. “Rolling Up the Rug: An American-Irish Story” is available on Amazon.

This is the first chapter of his tale:

The fall of 1961. I am with my father. He has returned to his homeland for the first time after 35 years in America. The two of us stand silently under a sullen Irish sky in the high, dry grass among the fallen stones of the old country farmhouse in County Sligo where he was born and raised. He is quiet for a long time. As he leads me down a deserted dirt road, he shakes his head slowly, "You see that crossroads, Mick?” He points, “Oh, the life that used to be had there of a Sunday morning after Mass, the boys and girls, the laughter, the flipping of coins, and the gambling, and my own father among them. Those good times — all gone."

Good times — but not good enough to keep my father from leaving the land of his birth. In 1928, a year before the depression, at age 22, he boarded the USS California at the port of County Derry and landed in New York City where he spent the rest of his life. The woman he married, my mother, Mamie Gallagher, had arrived in New York one year before him. At age 16, she was the oldest of five children when she left her family's small farm in County Leitrim. She said good-bye forever. She never saw her parents again.

My father was an Irish fiddler. My mother sang songs in a lilting, operatic voice. They were the life of every gathering, and they threw many a party themselves. When I think back to my parents and the apartment where they raised my brother, sister, and me all those years ago, I think first about the parties.

A Saturday morning in the early 1950s. Mom and Pop begin moving the couch, chairs, and tables from the living room into the kids’ bedroom. Getting down on their knees in the living room, they begin the ritual that truly signals a night of music and dancing: rolling up the rug. With grunts and pushes and lots of, "Easy does it there!" they hoist the big well-worn, maroon patterned rug and banish it to the bedroom for the night. They then rim the bare living room with bridge chairs rented for the occasion — and the room transforms into a tiny dance hall.

Later, my mother shops for a big ham, cold cuts, potato and macaroni salads and coleslaw from the German delicatessen. At the Jewish bakery, she buys several loaves of seeded rye bread, marble cake, and macaroon cookies. The local beer distributor delivers a keg of beer that is hauled up the five flights of stairs and set up on its side in the kitchen sink with a spigot attached for the pouring. Bottles of Four Roses and Canadian Club whiskey stand ready on the kitchen table to be mixed later with ginger ale for "high balls."

By evening the men and women arrive decked out in their best. Most of the Irish who lived in and around our neighborhood of Highbridge had come to America in the 1920s in a wave of immigration after Ireland gained independence. Like, my mother and father, they were mostly from the farms in the west of Ireland from counties Galway, Mayo, Sligo, Clare, Leitrim, Donegal, Roscommon, Longford, Cavan, Cork, and Kerry.

The women come bustling into our little apartment all perfumed, powdered, and corseted into dresses dotted with rhinestones. The men in starched white shirts with wide ties tightly knotted, their faces shiny, clean-shaven and smiling. Their big, ham-fisted-laboring-man-hands extend in greeting, often crushing a dollar bill into the little hand of the boy who carries their coats and fedoras off to the bedroom.

My Uncle John, the bartender at Leo Sullivan's Saloon, serves the drinks and before long my father, with his red and yellow bow tie, takes his seat next to Mike Ryan, the accordionist, and they strike up the first dance of the evening. It is always the same lilting melody: "The Stack of Barley" — the original Irish tune that gave birth to America's "Turkey in the Straw." At once, men and women are up on the little-improvised dance floor swinging each other, laughing, dancing and whooping. They stomp the bare floor of our little living room while others stand around clapping their hands, tapping their feet, shouting encouragement. My father's elbow gyrates madly on the fiddle, his left foot tapping the floor to the driving rhythm of the music. Highland flings lead into an Irish hopped-up version of the "Verse of Vienna," followed by set dances and old-time waltzes. And one special night, as the fiddle and accordion music floats out our window onto the steamy summer night air, my Aunt Margaret – in a pink satin dress, her curly blond hair piled high on her head – leads the entire crowd around every room of the apartment in a Conga line that goes on forever.

Later in the evening, they settle down to sing. Happily crammed together into our little Bronx apartment, these country people – now transformed into hard-working New Yorkers – begin to recall the quiet beauties of the land they left behind. They sing of the valleys, streams, and meadows of their youth:

Come by the hills to the land where fancy is free,

And stand where the peaks reach the sky

And the rocks meet the sea.

Then my mother sings:

Last night I had a pleasant dream,

I woke up with a smile.

I dreamt that I was home again

For most of those people in the room, going home again to Ireland remained only a dream.

They sing funny songs too about Eliza's two big feet and of Paddy McGinty's Goat – famous for eating up all of Kate's "folderols" on her wedding night. And then, always towards the end, my mother and father sing "their" song together. She in her chair, her hands in her lap, a big, white smile on her face, him standing beside her, his hand resting on her shoulder, the roomful of friends in rapt attention, knowing well the song about to be sung:

When you and I were seventeen,

Life was but a dream

The world was just a field of green

And you my charming queen

Oh, do you recall

When love was all

And we were seventeen.

In the glow of such moments, my ten-year-old self wishes that nobody will go home, the lights will never go out, nothing will ever change, and nobody will ever die.

*“Rolling Up the Rug: An American-Irish Story” is available here.