The Irish Arts Center in New York has navigated the difficult shoals of the pandemic with their ability to think outside the box and be creative and innovative. 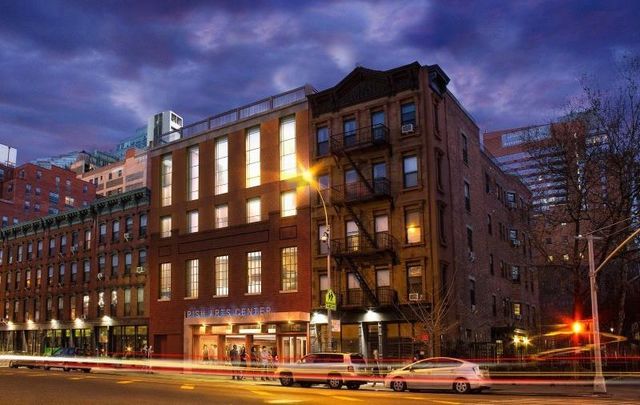 Optimism and opportunism abound at the Irish Arts Center in NYC despite the pandemic.

It was yet another celebratory night last March just before the shutdown for the Irish Arts Center as it gathered together a dazzling array of artists, sponsors and movers and shakers in the NY scene to honor Bill Whelan, the composer of the music behind Riverdance that was marking its 25th year at Radio City Music Hall later that night.

In the Manhattan Club atop Rosie O’Grady’s Restaurant just a block away, the visionary Whelan was saluted by the IAC not only for his Grammy-winning work in Riverdance but for his own generous contributions artistically and financially towards the long-awaited new home for the plucky epicenter for Irish culture in the Big Apple also just a few blocks away on West 51st Street.

But by the show’s intermission, the mood turned somber as reports of the European travel ban and looming Broadway shutdown darkened prospects not only for the still upcoming St. Patrick’s Day events but also for the foreseeable future as social distancing became the new “law of the land” to prevent the spread of COVID-19, the deadly virus said to originate in Wuhan, China.

The always fast on his feet Executive Director of the IAC Aidan Connolly started consulting with his staff and the IAC Board of Directors by the next morning after also consulting with Mick Moloney the producer of the successful IAC series “Celtic Appalachia” who were to appear at Symphony Space on Friday night, March 13 with a big crowd already expected. Like everything else around that time and since, cancelation was to be its fate. And for Connolly who was looking forward to driving the bus to the shiny new state of the art edifice rapidly moving towards its final stages of readiness for a fall opening this year, the wheels were starting to come off the well-laid plans for a final season at 553 West 51st after a long waged campaign that had amassed over $60 million to accomplish this very complex dream.

It certainly looked like the timing for a pandemic to take over the world couldn’t be worse, and that the massive shutdown would be a double whammy for the Irish Arts Center.

However, in a recent “zoomed” in conversation with Connolly and the IAC Director of Education and Programming Rachael Gilkey, optimism and opportunism dominated the discussion. Together along with Vice Chair Pauline Turley, they have plied a pro-active path punching above its weight as the little engine that could in the humble home that was once a derelict garage with two office floors above it when the IAC rescued it from NYC in 1974.

From the outset in 1972 with founding father Brian Heron through Director Jim Sheridan and Turley herself supported by longtime patron Georganne Aldrich Heller, there was a determined vision to make the IAC not only a relevant place for a contemporary Irish America and an open portal for adults who shared that expansive mission. If that was a long marginal and chaotic march to the 21st Century, so be it and it still laid a viable foundation for the Millennial transformation once Connolly arrived on the scene in 2008.

The capital plan for a 21st Century Irish Arts Center that has been in the making for 12 years has been well established and was well on schedule and budget 17 months after the shovel went into the ground meeting the NYC requirement that it would open without debt thanks in large part to the City’s own commitment of over $30 million and massive administrative assistance.

The Irish Government and New York State also kicked in big bucks worth another $13 million, give or take a Euro, and the other third raised by ceaseless and targeted fundraising efforts by the IAC. The building will open to great fanfare eventually though the timing has much to do with how the pandemic plays out as well, but patience met with close-knit planning and execution are assets well in store at the IAC.

Our conversation dwelt mostly with the nimble operations that Connolly and Gilkey set into motion when the crisis hit back in the early Spring when somehow the IAC flag had to keep flying. Much of what they were able to draw upon was the parallel construction of what they and their talented but small staff had built up organizationally that went beyond the four walls of the Hell’s Kitchen headquarters they had outgrown years ago.

Connolly constantly refers to it as the “ecosystem” that is the heart and underpinning of all that it accomplishes. It consists of the artists who are recruited to perform and create the innovative programming through the years on both sides of the Atlantic with a big push from Culture Ireland abroad and the audiences who turn out in droves to experience the wealth of talent on site and elsewhere when the collaborative occasion suits. It includes the students who flock to the courses that have been part of the IAC mission from the get-go.

And importantly it also includes the funders and sponsors down through the years who have embraced the diligent and sophisticated cultural choices made by the committed IAC staff. And pivotal to all that is the Board of Directors currently led by Shaun Kelly who recently retired as Chief Operating Officer for KPMG International who succeeded another long time businessman and supporter of the IAC, Gerry Boyle of Commodore Construction.  Many board members have been successful business people with their own experience of ups and downs and seizing the moment for opportunities. Collectively they make the IAC viable day in and day out.

With the upcoming Spring Semester coming up in April, Gilkey and her associate Jesse Reilly (Director of Education and Community Programming) quickly canvassed their roster of teachers for the 40 classes to see if a Zoom teaching platform was an option for them and 26 agreed they would give it a try. They were offered tutorials on how to teach online and students bought into the concept with a number of classes selling out.  It was deemed successful enough for the IAC to try for the first time to offer summer classes when they usually take a break and this time 33 classes were offered including some dance classes online. Providing a much-needed cash flow for both the IAC and the teachers, these online classes also proved an outreach potential to as many as 19 US states (including Hawaii) and one Irish language student in Italy which could certainly lead to heretofore augmentation for the New IAC beyond the current horizon.

Connolly humbly suggests that the IAC is but “a vessel” to allow the artists they engage and employ to share their craft and creativity and that they are at the very heart of the organization to be supported by the staff and the Board and, of course, audiences as much as possible. So, the move to free online programming in two strands was also important to provide outlets for the artists and some remuneration.

One was a track they called “At Home with the Irish Arts Center” mirrored other channels employed by individuals in cyberspace with their usual multi-disciplinary sampling. The other was to reach into their vast archive of live performances captured on video over the years in their Black Box theater-- named for the parents of longtime supporter and former board chair Cel Donaghy -- and revisited as “Live from the Irish Arts Center” with updated commentary where possible.

Developing that ever-widening relationship with the artistic community and artists allowed the IAC to be nimble in their alternative programming this Spring and Summer.  From the roster of recent performances, there were two examples of musical artists who performed last year and made for viable “At Home” candidates. Founding member of the Frames and innovative fiddler and composer Colm Mac Con Iomaire performed in June from his home in Ireland.

Last year he appeared in an inventive stage show with Irish singer Loah and an Indian musician and composer Utsav Lal who first was introduced to IAC stages in a Martin Hayes Residency there a few years ago.

And just two weeks ago they presented two young musicians steeped in traditional music, Doireann Glackin and Sarah Flynn exploring the music of early 20th Century women musicians from their 2019 CD “The Housekeepers”.

While Connolly and Gilkey grimly admit that the pandemic has caused great hardship and delay to the IAC along with everywhere else, they do see some silver linings as they use this time as a learning curve offering new perspectives and avenues to travel to deliver programming. Ironically, the old building may yet prove an especially useful conduit for tailored podcasts or “webisodes” of new programming during the long-extended runway before the new building is available and it faces its own long-overdue renovation.

Connolly is a firm believer that slow and steady wins the race and that it is “full steam ahead on the new building now and the programming we are still developing here in New York City, the greatest city in the world for cultural stimulation and collaboration. When we are ready to open fully, we want that moment to be fully credible and sustainable and a real driver for Irish Culture in our city and for the Diaspora.”

The resourcefulness exhibited thus far as the Irish Arts Center has navigated the difficult shoals of the pandemic once again manifests their ability to think outside the box and be creative and innovative. Their new building on 11th Avenue adjoining their over-achieving 51st original building will be a flexible facility with several spaces like the main theater, studio space, library, and adaptable social space.

Connolly is excited about the range of the expanding canvas that will be available to artists there through theater, dance, music, and the visual arts that will still maintain the intimacy of performance that is core to the Irish Arts Center performance programming.

At the finish line when the ribbon is cut, an entire ecosystem will stand tall along with Connolly and the company applauding a long and determined journey.

An updated view of progress as of July of the new Irish Arts Center growing in Manhattan: