Governor Kathy Hochul believes that the new gun legislation in New York will "save lives." 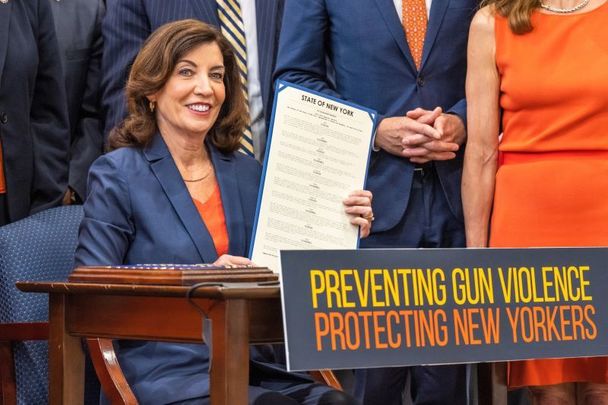 Governor of New York Kathy Hochul, the granddaughter of Irish immigrants, has signed a new gun legislation package less than a month after ten people were killed during a mass shooting at a supermarket in her hometown of Buffalo, New York.

"Gun violence is an epidemic that is tearing our country apart,” Governor Hochul said on Monday while signing the package in the Bronx. “Thoughts and prayers won't fix this, but taking strong action will.

"In New York, we're taking bold steps to protect the people of our state. I am proud to sign a comprehensive bill package that prohibits the sale of semiautomatic weapons to people under 21, bans body armor sales outside of people in select professions, closes critical gun law loopholes, and strengthens our Red Flag Law to keep guns away from dangerous people—new measures that I believe will save lives.”

She added: “While we are taking expedient action to enhance New York State's nation-leading gun laws, we recognize that gun violence is a nationwide problem. I once again urge Congress to follow our lead and take immediate action to pass meaningful gun violence prevention measures. Lives depend on it."

The 10 bills I signed into law today are the start of our work to stop these tragedies — not the end. pic.twitter.com/awokEF8Ec3

The Associated Press reports that in New York, most people under age 21 had already been banned from owning handguns. People age 18 and over will still be allowed to own other types of long guns, including shotguns and bolt-action rifles.

Part of New York’s new law will also require all purchasers of semiautomatic rifles to get a license, something now required only for handguns.

The debate surrounding gun control has come to a fever pitch in recent weeks amidst a wave of shootings across the US.

The same day that Governor Hochul signed the new New York package, USA Today reported that the US had seen its deadliest weekend of mass shooting gun violence this year, where at least 17 people were killed Friday to Sunday.

According to Gun Violence Archive, there have been 247 mass shootings in the US this year.

While states like New York are making changes, a bipartisan group of lawmakers in the Senate, led in part by Connecticut Senator Chris Murphy, are continuing to try to find common ground on gun control legislation.