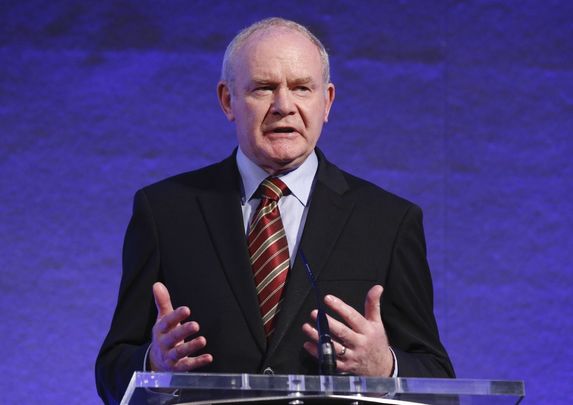 The Irish American community is invited to join an inaugural Chieftain’s Walk in Manhattan to honor the late Martin McGuinness and support his Peace Foundation.

The inaugural NYC event scheduled for Sunday, September 19 will feature a four-mile walk / run which will begin at the Irish Hunger Memorial in downtown Manhattan and head up the Westside Greenway to 14th Street before returning back to the Memorial.

Pre-walk registration and entertainment from Cathy Maguire will kick off at the Irish Hunger Memorial at 10 am before Senate Majority Leader Chuck Schumer offers opening remarks at 10:30 am. The walk, which will feature live music from The Diddley Idols, will commence at 11 am.

Registration is now open online. Fees, which benefit the Martin McGuinness Peace Foundation, are $25 for individuals, $10 for people aged 12 - 18, free for people under 12, and $60 for a family of four. Gold, silver, and bronze sponsorship opportunities are also available.

Registration is now open online. Organizers suggest hosting your own "remote" walk if you cannot attend the event in New York City.

The Martin McGuinness Chieftain's Walk, the first of its kind to take place in New York City, is mirrored after the same efforts of Martin’s family and friends from Derry.

THANK YOU! 👏 We would like to thank everyone who made this year’s Chieftains Walk another huge success. Particular...

Friends of Sinn Féin says: “It was always clear that Martin had a true affection for America and made many friends during his visits. It is a testament to his worth that Irish America continues to honor his legacy.”

Heads of Sinn Féin Mary Lou McDonald and Michelle O’Neill are both encouraging people to sign up for the walk in New York City.

McDonald, the president of Sinn Féin in Ireland, asked people to support the event “in the memory of our Martin McGuinness but also to support his legacy and his work for peace, for reconciliation, and for Irish unity.”

https://raceroster.com/events/2021/50697/martin-mcguinness-chieftains-walk-nyc Make sure to register for the inaugural Chieftain's Walk which is just 19 days away on September 19th. Check-in is at 10:00 am at the Irish Hunger Memorial. Opening remarks from Senate Majority Leader Chuck Schumer will be delivered at 10:30. A special tribute to our Chieftain will be performed by Cathy Maguire. Then we will proceed up the Westside Greenway to 14th street and return back to the memorial. The Diddley Idols will also entertain all participants with tunes fitting for the walk. Be sure to share the registration link with family and friends. It promises to be a memorable event.

O’Neill, the Vice President of Sinn Féin and the Deputy First Minister of Northern Ireland, said: “It is really fitting that this walk will be hosted in New York, a city Martin visited many times, and where he was always greeted with open arms by friends and supporters.”

Born in 1950, Martin McGuinness witnessed all around him the discrimination that nationalists suffered in the north of Ireland and in his native city of Derry. He joined the Irish Republican Army in 1970 and in 1972, he was part of an Irish republican delegation who met with the British government in London. From that period onwards, Martin was to become one of the most prominent Irish republican leaders of his generation.

Appointed as Sinn Féin Chief Negotiator during the emerging Irish peace process in the late 1980s, Martin was instrumental in achieving an IRA cessation of hostilities in 1994. He also led the Sinn Féin negotiating team in the subsequent peace talks and in shaping the 1998 Good Friday Agreement, a key development in bringing an end to the conflict in Ireland and between Ireland and Britain.

In 2016, Martin developed an illness, amyloidosis, which was to eventually take his life on 21st March 2017. Tens of thousands of people attended his funeral, the biggest Derry has ever seen. Among those attending were political leaders from across the world, including former US President, Bill Clinton. Memorials were also hosted in NYC and Washington, DC.

The Martin McGuinness Peace Foundation was launched by his family, friends and the Gasyard Wall Féile in October 2019 to celebrate Martin’s life and legacy.

The Peace Foundation celebrates Martin’s life, work, and achievements as a leader, a political activist, and an international statesperson – promoting his aims, objectives, and progressive ideals of:

The Foundation is promoting these goals through an inclusive program of education, sport, debate, art, and culture, which is open to all.

The Foundation aims to tell Martin’s story and also to advance his goal of an agreed Ireland based on equality, inclusion, respect, and reconciliation.