The Martin McGuinness Principles wake up a sleeping Irish America

After a long period of confusion Irish America is quickly banding together behind the new McGuinness Principles. 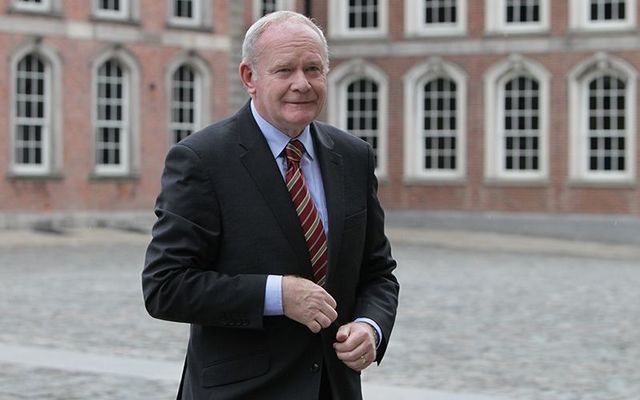 After a long period of confusion, Irish America is quickly banding together behind the new McGuinness Principles.

The merchants of gloom about the imminent demise of the Irish American activist community may need to revise their opinion after last night.

200 Irish Americans packed the Roosevelt home where FDR and Eleanor once lived and now a museum, in midtown Manhattan to hear the latest information and kick-start the McGuinness Principles.

What was fascinating was the cross-section, young human rights lawyers mixing with stalwarts from the AOH, Brehon Law and community activists. The common cause was the memory of the late Martin McGuinness and the introduction of the principles.

The evening was masterfully put together by State Comptroller Tom Di Napoli and his irrepressible Irish aide Pat Doherty who played a huge part in an earlier era in drafting the MacBride Principles which had a major impact on fair employment in the North.

Now Irish America has come swooping back after a period of confusion over exactly what to do next to bring about the fulfillment of the Good Friday Agreement.

The answer is the McGuinness Principles aimed at leveling the playing field and creating an American impact on the talks in the North.

Senator Chuck Schumer with the two sons of the late Martin McGuinness.

I predict now the McGuinness Principles are going to be the most important issue in the Irish American community over the next few years.

They are very basic principles, some so basic that it seems downright ridiculous they need to be fought over in 2018,

“Each word is linked to a specific goal. Equality links with a Bill of Rights, which was promised in the Good Friday Agreement but has yet to be legislated for.

Respect links to the calls for an Irish Language Act, which was promised in the St Andrews Agreement but again not delivered by the British government.

Truth links to the legacy of the past, and the consistent efforts that have been made to prevent the relatives of victims from knowing what happened to their loved ones.

And self-determination links to calls for a referendum on Irish unity.”

Who’s afraid of Equality, Respect, Truth and Self Determination?

Not Senate Minority leader Charles Schumer, who during a visit to Washington by two sons of Martin McGuinness, Fiachra and Emmet, agreed to back them.

Part of the appeal is that they are called after McGuinness, a hugely popular figure in Irish America whose untimely death touched communities here to the bone.

It seems like McGuinness is still organizing from beyond the grave, lending his name to a set of principles that grass root activists will carry across the country in Congress, state houses and legislatures.

There is no reason not to back the Principles but no doubt there will be attempts to block them. Ironically brought together by an Italian politician, it seems obvious the Irish in America are saddling up for a new battle.