Brenda Downes has called for an inquest into the killing of her husband John Downes, who the RUC shot with a rubber bullet in Belfast on August 12, 1984. 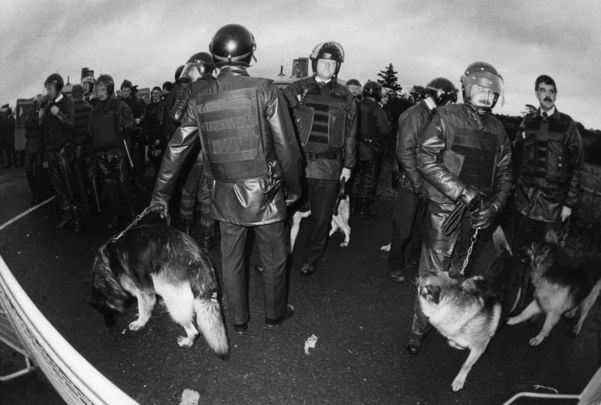 Members of the Royal Ulster Constabulary, photographed in 1988. RollingNews.ie

John Downes had led a tour of 80 Americans to see for themselves what life was like for nationalists under the British in August 19484.

At that time, because of censorship by visa denial, leading Republicans like Gerry Adams and Martin McGuinness could not travel to the United States.

Because of the publicity given to the tour that the Americans undertook, Martin Galvin, then the editor of the Irish People newspaper and national publicity director for Irish Northern Aid, was given an exclusion order by the U.K. government headed by Margaret Thatcher.

When Galvin appeared at a peaceful rally in Belfast, the RUC carried out a punitive attack on the entire crowd, killing John Downes with a plastic bullet and wounding scores of others.

Brenda Downes is now working with Belfast-based Michael Brentnall Legal in seeking an inquest into her husband's death.

A statement issued by Michael Brentnall Legal says: “Our client wishes to express her unreserved condemnation of plans by the British government to introduce an effective legislative amnesty for RUC and British Army personnel regarding state crimes committed during the conflict period here; a move which also specifically threatens to put an end to her own attempts to pursue an inquest in relation to John’s death.

“Brenda’s husband John was shot dead in August 1984 by a police constable acting on the orders of the RUC hierarchy while pursuing the unlawful arrest of international activist Martin Galvin from the grounds of Connolly House, Andersonstown, Belfast.

“It is our belief that John Downes’ death was the direct result of a pre-planned aggressive operation organized in a way in which death and serious injury to innocent members of the public was a foreseeable outcome. Both the RUC hierarchy and Reserve Constable Nigel Heggarty acted in a fashion contrary to European Convention concepts of the right to life and was therefore unlawful.”

Brenda Downes added: “By removing the option of an inquest, the British government is essentially signaling their intention to pull the curtain down on my decades-long attempt to secure justice for my husband. Contrary to what (U.K. Northern Secretary) Brandon Lewis has stated, this is not the time to ‘draw a line under the past.’

"In fact, the British government and judiciary have tried to draw a line under my husband’s death since 1984. But I will not allow John’s killers to walk away for a second time; be that the man who pulled the trigger, or those who sent him out to do so.

"I am again demanding an inquest into the unlawful killing of my husband.”

Galvin said of the inquest demand: “The killing of John Downes is another example why Britain’s proposals could be more truthfully titled ‘burying Britain’s legacy in the North’s past.’ Britain wants to use the statute of limitations gimmick to take away the legal rights of Brenda Downes, and so many others to inquests and civil actions, simply to stop proceedings, like the Ballymurphy inquest, from revealing the truth about hundreds of British crown killings.

“We believe an inquest would show that the killing of John Downes resulted directly from a premeditated and planned state force operation deploying indiscriminate force without warning, against peaceful demonstrators, including 130 Americans on a fact-finding tour in violation of European law.

“Irish Americans are uniting behind all those like Brenda Downes fighting for legacy justice and truth."