Northern Ireland bombing, killed 29, could have been stopped

Judge rules there's a "real prospect" the 1998 Real IRA bombing of Omagh could have been prevented. 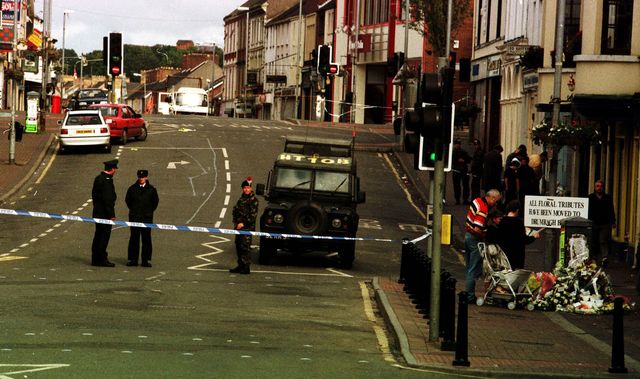 British Army in the town of Omagh, in County Fermanagh, following the bombing by the Real IRA, in 1998. RollingNews

A Belfast judge has called on the British and Irish governments to carry out a "human rights compliant" investigation into the 1998 Real Irish Republican Army attack, which killed 29 people, and he believes could have been prevented.

The Omagh bombing was the deadliest single incident of Northern Ireland's Troubles. On Aug 15, 1998, the bombing was carried out by the Real Irish Republican Army (Real IRA), a Provisional Irish Republican Army (IRA) splinter group who opposed the IRA's ceasefire and the Good Friday Agreement, signed earlier that year. The Omagh bombing killed 29 people and injured some 220 others. Among those killed in the bustling town center was a mother pregnant with twins.

High Court Justice Mark Horner told Belfast High Court "I am satisfied that certain grounds when considered separately or together give rise to plausible allegations that there was a real prospect of preventing the Omagh bombing.

"These grounds involve, inter alia, the consideration of terrorist activity on both sides of the border by prominent dissident terrorist republicans leading up to the Omagh bomb.

"I am therefore satisfied that the threshold under Article 2 ECHR (European Convention on Human Rights) to require the investigation of those allegations has been reached."

The judge said he would not order what form the investigation took as he did not want to be "prescriptive". He also pointed out that he does not have the power to order the Irish government to act but hoped they would take action.

He continued "Any investigation will have to look specifically at the issue of whether a more proactive campaign of disruption, especially if co-ordinated north and south of the border, had a real prospect of preventing the Omagh bombing, and whether, without the benefit of hindsight, the potential advantages of taking a much more aggressive approach towards the suspected terrorists outweighed the potential disadvantages inherent in such an approach."

How did it happen?

In 2013, campaigners launched the action attempting to force an inquiry into the bombing.

Eleven days before the Omagh bombings the Royal Ulster Constabulary received an anonymous telephone call warning there would be an "unspecified" terrorist attack on police in Omagh on Aug 15.

The RUC's Special Branch took limited action on this information. The threat warning was not sent to the sub-divisional commander in Omagh.

An ombudsman investigation and RUC review concluded, in 2000, that the information should have been passed on.

Michael Gallagher, whose son Aiden was killed in the 15 August 1998 blast, launched the judicial review after former Northern Ireland secretary Theresa Villiers decided not to order a public inquiry. Villiers argued that a probe by the police ombudsman was the best way to address any outstanding issues.

Within the Omagh families' legal case are claiming that intelligence from British security agents and Royal Ulster Constabulary officers could have prevented the bombing.

Before leaving office earlier in 2021, former Democratic Unionist Party leader Arlene Foster said the Omagh families deserved an apology for the delay in the ruling.

Foster said, "No one should be expected to wait eight years for a court judgment."

Ireland's Taoiseach (leader) Micheal Martin told RTE News "will do what is necessary in terms of the citizens on the island of Ireland" following the judge's statement.

Taoiseach says he 'will do what is necessary in terms of the citizens on the island of Ireland' as a NI judge recommends that the UK govt undertake a human rights compliant investigation into the Omagh bombing and urged the Irish Govt to do likewise https://t.co/Wmo6uMLVIV pic.twitter.com/wuS5ignABB

In a statement, Secretary of State for Northern Ireland Brandon Lewis said "The Omagh bombing was a terrible atrocity that caused untold damage to the families of the 29 people who were tragically killed and the 220 who were injured. The reverberations of that awful event were felt not just in Northern Ireland, but across the world.

"I want to put on record my deep regret that the families of those killed and wounded have had to wait so long to find out what happened on that terrible day in 1998. They deserve answers and I have great respect for their patience, grace, and determination.

'We recognize that today the court has set out that there are 'plausible allegations that there was a real prospect of preventing the Omagh bombing' and that more should be done to investigate this.

"The UK Government will take time to consider the judge's statement and all its recommendations carefully as we wait for the full judgment to be published."

Michael Gallagher released the following statement saying "we are not the terrorists here".

"We are not the terrorists here" says Michael Gallagher, whose son was killed in the Omagh bomb in 1998 after a judge ruled today the UK and ROI should launch a fresh investigation pic.twitter.com/1SKYGUz6LZ

Here is a short news clip released in 2018, marking the 20th anniversary of the Omagh bombing: