"I lit a candle for little Maggie and all the other little Maggies overlooking us... the intriguing truth is that she knows well what you wrote about her." 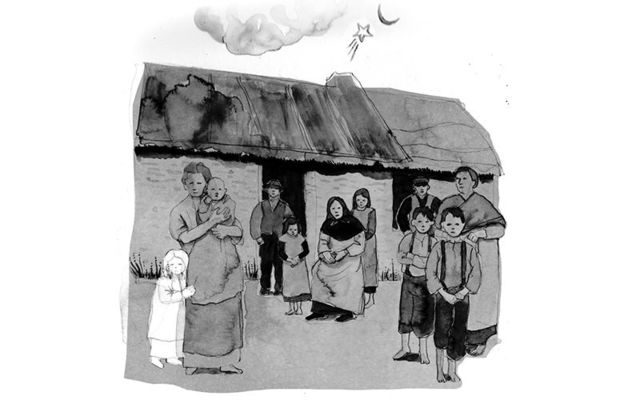 "The angels took little Maggie away to a happier place." Caty Bartholomew

"I lit a candle for little Maggie and all the other little Maggies overlooking us... the intriguing truth is that she knows well what you wrote about her."

Niall O’Dowd’s evocative piece on IrishCentral last week about delving into the 1901 Irish census returns to discover there were 13 of his ancestors residing in that little home seven miles away from Dingle, five or six years before our publisher’s father was born, sharply caught my attention on two lobes of my zany brain.

The primary trigger was an ongoing reality here of our linguistic laziness and the secondary point of interest, quite poignant too, was Niall’s clear regret and interest in the fact that the little Maggie child in that 1901 census in Kerry was gone away, clearly to heaven, before the next census a decade later. The child mortality rate back then, as he properly records, was high in the era before powerful antibiotics improved our lot to some degree at least.

Linguistic laziness? Maybe I am wrong here, but Niall mentions that there were no O’Dowds living in that three-roomed building in Kilcooley back in 1901. The family was simply known as the Dowds of that Kerry townland.

The “O” was attached to the surname much, much later and that, intriguingly, is still a linguistic reality today in 2018 right across the provinces. Whenever we get the opportunity, for whatever reason, we drop the “O” at the first opportunity.

This is especially the case in relation to certain numerous clans such, for example, as the O’Flahertys of the west and the O’Donoghues and O’Connells further south. But it applies widely to the “O”s of rural Ireland in a fashion is which it does not apply to the many of us who have a “Mc” or “Mac” in the middle like myself and my clansmen.

Quite frankly I do not know why that is the situation. Do any of you scholars out there know? I’d appreciate input on that front for sure.

If you encounter a Flaherty on your vacation or business trip, especially west of the Shannon, you can bet your bottom dollar that the name O’Flaherty is written on his or her birth certificate.  He or she is likely, however, to go all the way down the road of life and living as simply a Flaherty unless they are unfortunate enough to get a summons to appear in court on some offense or other or, in her case, when she marries, the wedding register will record the full baptismal name.

I grew up in an Ulster county where every second family was a Maguire.  It is also true, because of the Catholic culture, that the Christian names were drawn from a small pot heavily featuring Patrick, Joseph and John.

There were interesting local devices deployed to identify one Pat Maguire from the three or four others in the same townland. They would go back through the ancestry so that, again for example, one would be known as Pat John Tommy (spanning three generations) and the neighbor was identified as Pat John Mick. (I knew both of them as a boy).

In a historic twist, however, the pot of names was so small and traditional that, occasionally it was necessary to deploy the granny or great-grandmother’s name to identify one Pat John Thomas from another. Then you would meet with Pat John Lizzie or Pat John Mary at the fair or market and know exactly who they were, and where they came from, and, indeed, given the depth of local knowledge then and now, you knew their breed, seed and generation, their strengths and weaknesses.

The Lizzies, we were told when young, were men you did not cross if they’d had a whiskey or two because ‘twas well known they couldn’t handle whiskey at all.  Folkloric realities of real wisdom like that.

Niall wrote that little Maggie was not spoken about at all in his family in his youth.  That is the way it was...and still is for the most part in rural Ireland to this day.

His father, he said, never spoke about little Maggie, he knows nothing about her really.  I readily understand that attitude of a different and resilient and deeply Christian population of that era.

They knew that the angels took little Maggie away to a happier place, remembered her for a little while in the trimmings of the family Rosary, and then, as was necessary, let her go away to enjoy and savor a higher dimension than she would ever have experienced even in a peaceful townland away west of Dingle more than a century ago.

Niall, thank you for that piece from yesterday land. I lit a candle for little Maggie and all the other little Maggies overlooking us from another place and dimension a couple of hours ago here in the chapel in Killaloe, and the intriguing truth is that she knows well what you wrote about her.

And she was not far away from me, either, as the candle flickered in its brass cradle. Life is wondrous and multi-layered, is it not.