Rebecca A. Fried, a high-school student at the Sidwell Friends school in Washington, DC, found overwhelming evidence that the No Irish Need Apply signs were very real and very prevalent. 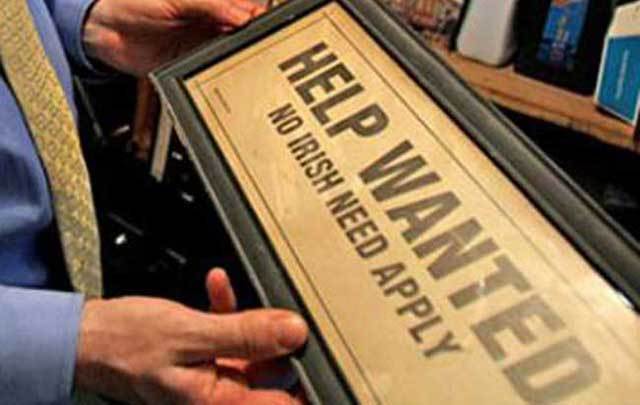 Did “No Irish Need Apply” signs really exist? One high schooler found historical examples of commercials and ads to prove they were in use at one time in the US.

The fact of the famous discriminatory posters "No Irish Need Apply" was called into question in 2002 by Professor Richard Jensen, then a Professor of History at the University of Illinois, and his theory gained credibility in the following years.

Jensen claimed that because his exhaustive search for any material or archival evidence of the NINA signs yielded only one result (pictured above), they were likely a myth, a figment of the collective Irish American imagination.

“The fact that Irish vividly ‘remember,’ NINA signs is a curious historical puzzle,” he stated.

“There are no contemporary or retrospective accounts of a specific sign at a specific location. No particular business enterprise is named as a culprit. No historian, archivist, or museum curator has ever located one; no photograph or drawing exists.”

But then in 2015, in a piece for the Oxford Journal of Social History – the same journal where Jensen published his findings – Rebecca A. Fried, a high-school student at the Sidwell Friends school in Washington, DC, found overwhelming evidence that the NINA signs were very real and very prevalent.

Instead, she writes, “the documentary record better supports the earlier view that Irish-Americans have a communal recollection of NINA advertising because NINA advertising did, in fact, exist over a substantial period of United States history, sometimes on a fairly widespread basis.”

That digitized newspaper archives are often incomplete likely made it easier for the evidence of NINA signs and advertisements to elude Jensen in the course of his research. Consulting an array of independent newspaper archives and databases, Fried has definitively proven him wrong.

The earliest example she found appeared in the New York Sun on January 15, 1842. It “solicited ‘[m]en and boys to carry pies’ in New York City. It specified a preference for ‘[t]hose who are accustomed to it,’ and instructed interested parties to ‘[a]pply 139½ Mott st., near Grand.’ It concluded with a NINA restriction: ‘No Irish need apply. Best of references required.’

One of the latest instances she discovered occurred in 1909 in Butte, Montana. There local Irish-American organizations gathered together for a meeting to discuss “’[a]n advertisement for a servant [that had] appear[ed] in the ‘want ad’ columns in a local paper” and that ‘stat[ed] that ‘Irish need not apply.’ At the meeting, ‘[t]he advertisement was characterized as an open insult to the Irish race, and reference was made to the part played in American and local history by the sons of Erin.’”

Fried’s evidence also disproves the suggestion that if the NINA signs did exist, they were likely to have been confined to specific time periods, locations or professions.

“We have more NINA advertisements from the 1840s than from any other decade, but from the 1850s through the first decade of the twentieth century, the frequency of NINA-restricted advertisements remains generally similar,” she writes.

“One Cincinnatian wrote a letter to the editor of a local newspaper complaining about an ‘advertisement of yesterday's Commercial' by a farmer, quoted as follows,” she writes.

“Wanted—A single man, who understands gardening, taking care of horses and cows, and will make himself generally useful on a farm. No Irish need apply.’”

She also lists examples that range from “A New York horseshoe shop's posting of a NINA-restricted advertisement triggered a boycott,” to “a NINA posting by the Chicago Railway Company contributed to unionization efforts among its employees.”

Brava to Rebecca Fried for setting the record straight.