A cousin of the famed Rooney family of Pittsburgh is seeking a seat on the Allegheny County Court of Common Pleas, after spending close to 15 years in private practice. 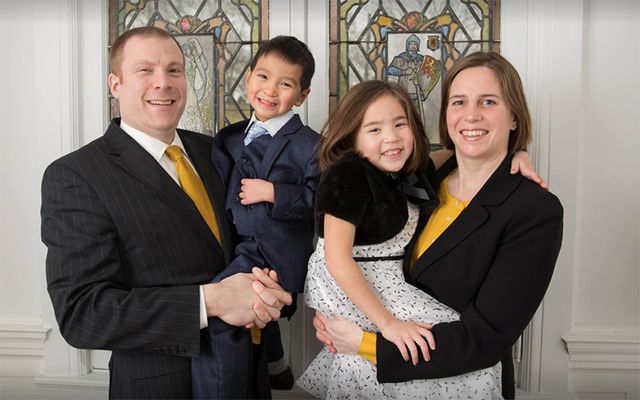 A cousin of the famed Rooney family of Pittsburgh is seeking a seat on the Allegheny County Court of Common Pleas, after spending close to 15 years in private practice. Mary McGinley, 39, is a member of the board of directors of Pittsburgh Steelers Sports, Inc., the storied franchise founded by her grand-uncle Arthur J. Rooney, Sr.   She’s the first and only woman to have been elected to the board of one of the country’s most famous sports franchises, and is a lifelong resident of the Steel City.

Currently practicing law at Meyer, Unkovic and Scott, LLP, and raising two children with her husband Patrick Earley, McGinley is hopeful of taking a seat on the court which has two open positions.  The election is set for May 16.

“I thought it was the right time to run because I feel like my experience is well rounded and there are also some family considerations.  I have small children who don’t quite have their own lives yet running around doing different things.  All of our parents are on board to help so it’s good,” she said.

Another consideration is a recent decision to raise the court retirement age from 70 to 75.  A vacancy might not arise for another five years, so McGinley decided to pursue a seat now.

McGinley is a partner and member of the Litigation and Dispute Resolution Group at Meyer, Unkovic & Scott. She represents clients – from small businesses to the region’s largest companies – in contractual and other commercial disputes, and families and individuals in estate litigation matters.

All of which will suit her well if she’s elected to the Court of Common Pleas, which deals with an array of legal issues in its family, civil, criminal and orphan divisions.

According to her biography, McGinley is active in the Allegheny County Bar Association and has served on the Judiciary Committee which is tasked with rating all candidates who desire to run for judge of the Court of Common Pleas and other courts. For over 10 years, she has chaired the Allegheny County Bar Foundation Attorneys Against Hunger Campaign through which she connects resources and volunteers to numerous hunger agencies. The campaign has raised more than $1.5 million. In 2011, McGinley was recognized by her peers when she received the Outstanding Young Lawyer Award.

“In addition to legal experience I also have experience handling various types of issues in the community, including community service and other regional experience,” she says.

McGinley comes from a long line of legal minds.  Her father is John R. McGinley, Jr., best known as Jack, a prominent attorney and philanthropist who practices law in Pittsburgh at Eckert Seamans. Uncle Bernard L. McGinley was a judge on the Commonwealth Court of Pennsylvania for nearly 30 years, and in 2014, he struck down the Voter ID law that could have prevented half a million people from exercising their constitutional right to vote. Her great uncle Austin L. Staley was nominated by President Harry S. Truman to a seat on the Third Circuit Court of Appeals, where he served for nearly 30 years.

Jack McGinley’s mother Anne Marie was the sister of Steelers founder Rooney, and his first cousin was Dan Rooney, former ambassador to Ireland under President Obama and the longtime chairman of the Pittsburgh Steelers who passed away last month.

“We’re very proud of the team.  We’ve been fortunate to be a part of it. It’s an exciting thing to be a part of, especially when they win,” McGinley says.

Speaking of Dan Rooney, his love of all things Irish stands out.

“He was very devoted to Ireland. I’m not sure what he liked talking about more, football or Ireland,” she laughs.

McGinley spent a semester abroad at University College Galway.  “I loved it there, so much so that I spent part of another summer there. I had a hard time leaving,” she recalls.  “It was a great city and a great experience.”