There's a last-ditch effort to save the traditional Irish pub, but they have been closed for six months now and it may be too late for many of them. 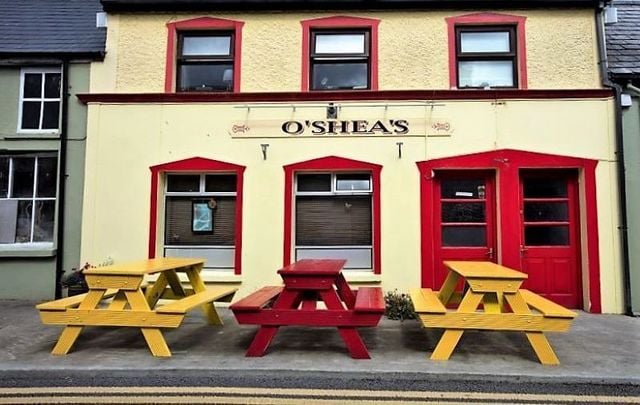 O'Shea's, a small pub in the rural area of Eyeries on the Beara Peninsula, in West Cork, which has remained closed throughout the pandemic. RollingNews.ie

An iconic part of Irish culture, many Irish pubs will not survive this coronavirus pandemic six-month shutdown.

*Editor's Note: This column appeared in the September 9 edition of the Irish Voice newspaper, sister publication of IrishCentral. It was announced on September 8 that Ireland's "wet" pubs can reopen from September 21.

This awful pandemic has changed so much about the way we live our daily lives. We all know that, and we long for the old normal rather than the new normal while we moan about what we have to put up with every day.

What people here are only starting to realize, however, is that the old normal may be gone for a very long time, perhaps forever. A lot of the change wrought by this pandemic may be long term or even permanent.

So many people have got used to working from home, for example. There is now a growing reluctance to go back to the office, whenever that will be possible again. Last week, one bank here announced it was withdrawing from the commercial property market, probably because it reckons demand for office space will not recover for the foreseeable future.

That's just one aspect of the impact of COVID. And there are many more resulting from social distancing, hygiene requirements, and all the other limitations necessary to suppress the spread of the virus.

One of the big talking points here in the last week or two has been the plight of the traditional Irish pubs across the country which have been closed now for six months. The reality is that some of them will never open again. And with them will go a part of our culture that is unique, something that makes Ireland what it is.

We're talking here about the family-run small pubs in towns and villages across the country, the quiet places where a stranger can wander in, sit at the bar and strike up a conversation with whoever is nearby while their pint settles.

More importantly, these are the places where locals meet and talk in the evenings, a vital point of social contact and support, and a key part of the community. (That's where the name pub comes from, a house open to the public.)

Most of these are what are now being called "wet pubs,” although that is not a term that was common here until the pandemic arrived. It means they are bars that do not serve food, apart from packets of peanuts or a very basic ham or cheese sandwich that comes in a cellophane wrap from an outside supplier. The term is used to distinguish them from the bigger bars or so-called gastro pubs which have full kitchens and provide hot meals like Irish stew, burgers, and fries, and so on.

As you may know, the pubs serving hot food were allowed to reopen at the end of June on condition that every customer had a meal that cost at least €9, observed social distancing between groups, left after an hour and 45 minutes, and there was table service only with no standing at the bar.

The problem for the small traditional wet pubs was that they do not have approved kitchens (which require professional equipment and a lot of stainless steel surfaces) and so could not offer a full food service. This meant that around 3,000 wet pubs -- almost half of all the pubs in the country -- could not reopen. As we said, they have now been closed for six months.

At this stage, the situation is critical for many of them, and there has been intense pressure from both the pub owners and frustrated customers over the past week or two for a solution. The government has been trying to find a way to allow them to reopen safely, and a blueprint for how that might be done was finally published last weekend.

It runs to an astonishing 23 pages of instructions, a reflection of how difficult this is in many small pubs with narrow bars, nooks, and crannies -- the very thing that makes them charming makes social distancing difficult.

Basically, the guidelines mirror the restrictions already imposed on the bigger bars that serve food and were allowed to reopen at the end of June, except that the requirement to have a €9 meal is not included. But if the small traditional pubs are allowed to serve drink without a meal, then the bigger pubs must be allowed to do so as well.

So we would be back to all pubs serving drink without customers having to order a meal as well. All the other limitations, like table service only, would still apply.

Part of the anger around the lengthy closure of the wet pubs has come from the revelation that some of the bars that offer meals and were allowed to reopen at the end of June have not been observing the food and distancing requirements. The gardai have now visited more than 150 bars where there were failures to follow the rules.

In some cases, "regulars" were being served their pints without food, they were being allowed to stand at the bar rather than having to sit at tables and they were on the premises for longer than the permitted time.

The trouble is that enforcing the rules can be difficult. If people are sitting at a table with drinks but no meal, the excuse from bar staff can be that the food is on the way or that the customers are still reading the menu.

To deal with this, new legislation was promised that would require pubs to keep a record of the food served at each table and would give gardai powers to close a bar where the rules were not being followed.  But the blueprint published last weekend which would allow all pubs to reopen without serving food would make this redundant.

So far, the blueprint is really a consultation document and the owners of the wet pubs are assessing whether it is practical and would allow them to reopen in a way that is financially viable. Having staff wearing visors and taking the contact details of the lead person at every table (in case tracing is necessary) is not be a problem. But separated table service only and social distancing is much more difficult in these small premises.

The new blueprint says that a one-meter separation between groups (just over three feet) would be adequate in pubs where a two-meter separation is not possible. A maximum of six people from three households would be allowed at a table. And there are pages and pages of other rules.

Whether all this will be accepted by the wet pub owners remains to be seen, although they have little choice.  Some are already saying they can't be profitable with these restrictions and will not reopen.

There could be further changes in the proposed rules before they are given the go-ahead to reopen in a few weeks. But the changes are unlikely to be substantial.

The wider context to all this, of course, is the ongoing decline of the smaller traditional Irish pubs. We have lost hundreds of them in recent years, long before this pandemic arrived. The virus has been the killer blow for many of them, and it accelerated what was happening anyway.

You might not think it from our image abroad, but alcohol consumption in Ireland has been declining steadily in recent years and is down 23 percent since 2001. This time period included the boom, lots of spending money here, and massive tourism numbers, yet alcohol sales went down, which is evidence of real change.

This change can be seen in the emergence of the cafe bars and gastro pubs where the focus is on food and conversation rather than on alcohol. Although weekend binge drinking is still a problem among some individuals and age groups, overall, far less people now drink simply to get drunk.

Fewer people drink every day or go to the pub on the way home from work. And this applies to young people as well, many of whom are much more concerned with their health and their image.

Heavy drunk driving penalties and the smoking ban have also played a part in the change in recent years for sure. But the underlying driver appears to be a change in taste and behavior.

We are becoming more like continental Europeans. The old days of drink being the center of our culture are fading.

All this is a shame for the traditional Irish pubs because they played a unique part in our society. Many still do and will go on doing so.

But with the unwanted help of this pandemic, many will be closing for good in spite of the government's belated efforts to save them.