The elderly man has since clarified that he brought the alarm clock to the pub so he could return home in time for the news! 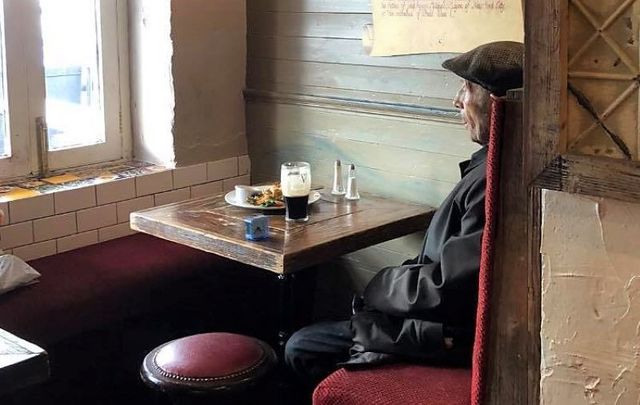 An elderly man pictured with an alarm clock while having a pint in a Galway pub has gone viral online. McGinn's Hop House, Facebook

A picture of an elderly man sitting in a Galway pub with an alarm clock and a pint has drawn plenty of reaction online.

Taken at McGinn's Hop House in Co Galway, the photo of an elderly man drinking his pint with an alarm clock in front of him has gone viral after the Irish pub posted it on Facebook.

The photo was also shared on Twitter by Kieran O Malley, who wrote: "This little old man has an alarm clock on the table so he doesn't stay over the 90 minutes:"

I'm not able.... this little old man has an alarm clock on the table so he doesn't stay over the 90min in McGinns in Galway.... 💔💔 pic.twitter.com/kByApsKMgC

As per current government guidelines, customers are under a time limit when dining at pubs that are currently open. There are exceptions made in relation to where social distancing is feasible.

On Facebook, one commenter wrote: "We should ask every member of the Government to comment on this photograph, and to see what you are doing to elderly people all over the country. Hit the soft targets, ignore the real issues. I hope ye are proud of yourselves."

On O Malley's tweet, one person wrote: "That is a hard picture to look at. What did he do all the months the pubs were closed? I hope whoever took the pic sat down and had a chat with him."

The now-viral photograph even got a mention across the pond in The New York Times.

After O Malley's tweet received great reaction online, he said he returned to McGinn's and "dropped a few quid in behind the bar for the man who's called Finbarr on behalf of all the lovely people here."

McGinn's Hop House has since posted on Facebook a clarification of its original post: "A chairde, to clarify the original wording of our post, it was never meant to be misleading in any way but to capture the moment.

"This man was well aware of the time restrictions in place and asked had he time for another pint, pointing at his clock.

"He’s chuffed with the attention.

"Massive amount of good will, sentiments and offers being made, thank you all !!
We’ll take all the positives & ignore future negatives.

A chairde, to clarify the original wording of our post, it was never meant to be misleading in any way but to capture...

The Irish Independent caught up with the elderly man in the now-viral photograph, who said: "I brought the alarm clock with me so I would get home in time to hear the news on RTÉ One at six o'clock.

"I always bring the clock with me, I never wear a watch."

He added: "To hell with the feckin' pubs, health is more important. I mean, if that (coronavirus) spreads again, we're all in trouble.

"I hope it doesn't. With the kids going to school again, you don't know.

"People need to do what they are told. That's as simple as that."