The Vintners Federation of Ireland has described the Irish government's support package for pubs as "crumbs." 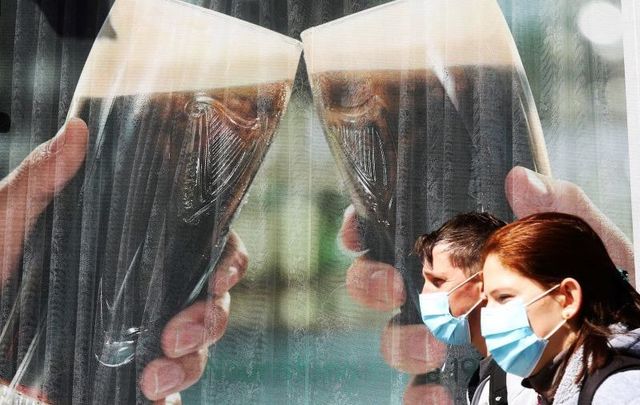 May 11, 2020: People wearing masks pass a pub in Dublin City. Ireland's "wet" pubs have been closed since March. RollingNews.ie

Editor's Note: This column appeared in the September 2 edition of the Irish Voice newspaper, sister publication to IrishCentral.

Sixty percent of the pubs that remain closed in Ireland since Covid-19 forced a shutdown in March could be permanently shuttered with owners already considering a different career, the industry has claimed.

The warning followed a further delay in allowing 3,500 “wet” pubs – those that don’t serve meals – to open this week. They had expected to be allowed reopen on Monday but, with the coronavirus still a major threat to public health, the government put back a reopen decision for another two weeks, and it could take much longer.

Tanaiste Leo Varadkar said last week that he "can't say with certainty" that Ireland's pubs will reopen by the end of the year.

Varadkar was speaking after the announcement of the government's €16 million support package, which has been described by publicans as "crumbs" and a “slap in the face.”

The threat that nearly two-thirds of the pubs will never reopen would be a massive blow to Irish tourism. The country’s pubs are a major attraction to visitors.

One publican, Maurice McLaughlin, who runs Ballyshannon’s Sean Og’s bar, told the Donegal Democrat that six out of 10 publicans are strongly thinking of closing their pubs for good.

He said that four out of 10 are thinking of taking up a different career as a result of the continued closure of the wet pubs.

He added, “These are not just my figures; they are from a survey conducted by the Vintners Federation of Ireland.”

McLaughlin, describing the government’s aid package as “paltry,” added, “We are on our knees and this offer won’t go anywhere near to help us get back on our feet.”

McLaughlin’s frustration was widely shared in his industry. Many bar owners accused the government of inaction on the issue.

They include Danny Healy-Rae, an Independent TD for Co Kerry who runs a family bar in Kilgarvan which is mainly operated by his wife and three daughters when he is busy on political matters.

Healy-Rae opened his bar by arranging for delivery of food from the Village Grill in Kilgarvan’s main street to provide the all-important meals which customers must have with a drink during the coronavirus crisis.

He told the Irish Sun, “We have opened in a small way like. We’re getting the stuff in from a restaurant chipper.”

The outspoken politician has had visits from gardai and health authorities who were both “quite satisfied” with the way the pub was being run.

Meanwhile, members of the Dáil will consider giving gardai powers to shut down pubs that do not serve food or maintain social distancing on the premises.

They are considering giving gardai immediate closure orders to shut an offending pub for a day or face a fine of €2,500 and six months in jail.