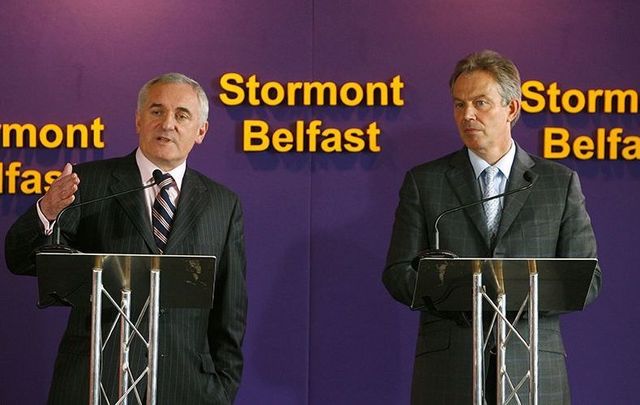 Bertie Ahern and Tony Blair speaking at Stormont during the Peace Process. Getty

Former Taoiseach Bertie Ahern and former British Prime Minister Tony Blair, who signed the Good Friday Agreement 21 years ago, have written a joint op-ed in The Irish Times in which they describe Brexit as “the most serious threat to peace in the North and to the union in our lifetime.”

Their appeal appears as the Brexit deadline is once more extended – to Halloween on October 31 – with British Prime Minister Theresa May and Labour Party leader Jeremy Corbyn now trying to negotiate a compromise that will get the deal agreed between Britain and the EU ratified by Westminster.

Ahern and Blair recall how they signed the Good Friday Agreement in 1998 and say they now feel “duty bound” to write about their thoughts on the Brexit crisis.

They say that when they felt the “hand of history upon our shoulder,” it was pushing then to the start of a process, not signaling the end of one.

The pair adds, “In our eyes, the people of Ireland, north and south, have been signing that agreement every day since. It is everyday actions and interactions of people, businesses, civil society, politicians and government that enable a lasting peace; not signatures on a piece of paper.”

They say May and her colleagues in Parliament must learn from previous mistakes and use the extension to October to encourage calm amid the chaos.

They also emphasize that nobody should compare the tragedy of The Troubles to Brexit, but as the rhetoric in Britain becomes stronger, the language more divisive and inflammatory, the divisions in the Tory and Labour parties more evident, the necessity for calm matters even more.

They note, “For some the defining image, and in some ways, crowning moment of the Northern Irish peace process is that of Ian Paisley, the loyalist politician and Protestant religious leader laughing and smiling alongside former IRA leader Martin McGuinness. Even we, back in 1998, as we signed the agreement, with Paisley baying ‘treachery and treason’ at the gates, could not have dared imagine that almost a decade later Paisley would be first minister of Northern Ireland and McGuinness deputy first minister.”

The pair also observed that following the vastness of the Brexit promises made before the referendum in 2016, that any agreement is unlikely to be what the public voted for. The people of the UK should now be given the final say.

Ahern and Blair write, “They should be asked if now, knowing all that they do, they still wish to proceed, on whatever basis is agreed by government and parliament.”

The values of the people on the Good Friday Agreement – reconciliation, tolerance mutual trust, and respect for others’ views – was now needed on Brexit.

The pair concluded, “That is the approach needed on Brexit now. The extension gives us another chance.  We must not waste it. We must use it wisely, and deliver the three Cs: calm, clarity and a confirmatory vote. Only then can come the fourth C: closure.”