As Ireland inches towards setting up its new government, the next report from the Irish Mother and Baby Home Investigation Commission is likely to be delayed. 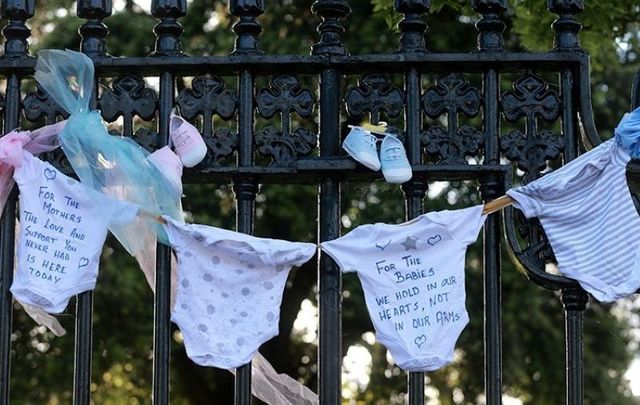 Scenes from an Irish Mother and Baby Home protest in Dublin RollingNews.ie

The next report from the Irish Mother and Baby Home Investigation Commission, originally due February 18, is likely to be delayed as a new government is being set up

With the next report from the Mother and Baby Home Investigation Commission likely to be delayed, survivors of Ireland’s notorious institutions are continuing to express their frustrations.

On January 7, a spokesperson confirmed that the Commission’s next report, due on February 18, is “on schedule,” but The Irish Times notes that Ireland’s recent General Election and the process of forming a new government will likely delay the report's delivery.

The February 2020 deadline was an extension of a previous extension of the deadline. The Commission most recently published its fifth interim report in April 2019.

The Commission was established by the Irish government in 2015 "to provide a full account of what happened to women and children in these homes during the period 1922 to 1998.

"The scope of the Commission's remit is broad, and includes several specific areas of practice and procedure in the care, welfare, entry arrangements and exit pathways for the women and children who were residents of the named 14 institutions and a representative sample of County identified for investigation."

The Commission has been organized under Ireland's Department of Children and Youth Affairs. The chair of that Department, Independent TD Katherine Zappone, lost her seat in Ireland's recent General Election and said over the weekend that she plans to "bow out" of Irish politics, potentially leaving the progress of the report in limbo.

Zappone said: "I had the privilege of serving the people of Dublin South West for the past four years - and I want to say thank you to them for that opportunity - and as Children's Minister.

"So I have decided that I will just continue my change work now outside of Irish politics.”

The loss of Zappone's seat comes about a week after Irish mother and baby home survivors and their families staged a protest outside of her Dublin office.

A spokesperson from the protest told The Irish Mirror on February 1: “We are distressed over the total lack of health and welfare provision for survivors - almost six years since the issue came to world attention.”

“Minister Zappone allowed Tusla and the HSE to delay providing files to the State inquiry and thus a three year inquiry is actually taking five years.

“Minister Zappone refused to publish recommendations from the survivors forum she herself had established and blocked any discussion of redress in the forum.”

“Minister Zappone hid behind a claimed need for new legislation to empower exhumations at baby home sites but has failed to enact legislation.

“She has failed to vindicate survivors right to prompt surveys and investigations at Bessborough and other sites where mass remains are suspected.”

Dublin resident David Kinsella, who was born in St Patrick’s Mother and Baby Home in Dublin, expressed similar frustrations; he told The Echo that further delays “leaves survivors in limbo.”

“Minister Zappone has found ways to delay the publication and can walk away after the election,” he said.

“While I understand and respect the Tuam babies need a proper burial with their families, that can go on as long as it needs to go on, but survivors have not got that time."

“For God’s sake, we want nothing more or less than other survivors got, like the Magdalene women, redress and recognition, nothing more and nothing less.”