Irish American Patrick Sheldon tracks down the grave of his grandmother Mary Griffin, who was forced to give her son up for adoption, in Co Galway. 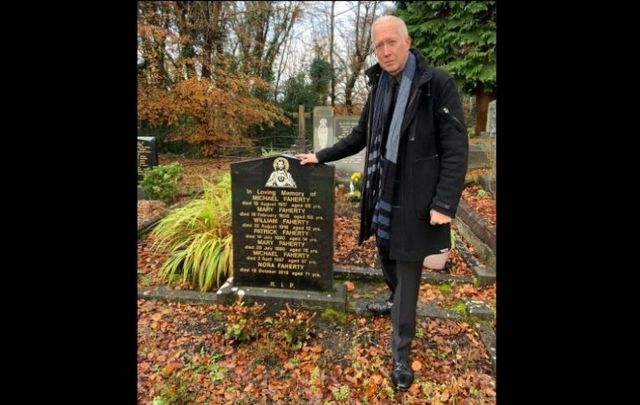 Mary Griffin is my biological grandmother, but my father never saw her, having been taken away by nuns at the orphanage.

The baby was left in the United States but Mary Griffin returned to Galway and we had no knowledge of her other than stories told by my adoptive grandmother. A mysterious letter arrived four decades ago from a young woman who said she was Mary’s daughter and had just found out she had a half-brother in Pittsburgh.

The letter came to my grandparents, but my family didn’t really believe she had the right person. I was confused that this woman, who would be my aunt, was only a few years older than I was.

Was she still alive? I had researched my Dad’s mother from her birth in Galway in 1907 until her death in Galway in 1986. I started the search based on stories from my grandparents who adopted Mary’s baby. The adoption records revealed that my grandmother —inclined to embellish stories— was surprisingly accurate.

A representative of the Children and Youth Services had offered to offer me a transcript because no documents can be removed from the court file. Mary made a final statement in the document: "I wanted to bring the baby back with me, but my mother was against it."

Mary’s words hit me hard. I had not expected to feel such strong emotions. Mary’s story was not rumored, or myth, or dirty joke, it was a woman’s dilemma. What were her options?

In 1932 America, she couldn’t keep a baby with no husband or she would have no life. In 1932 Ireland, she might have been condemned to the Mother and Baby homes and died. The child was left in the orphanage.

Marie and Harry were the adoptive couples, and my grandmother knew Mary’s story because the Galway woman had stayed with her family in Pittsburgh for a time when she arrived in the States. She also knew Patrick Gannon an immigrant from Sligo to Pittsburgh who was named in the records as the birth father.  Mary and Harry Sheldon went to the orphanage specifically looking for Paddy in 1934.

Mary was married when she signed the adoption papers from Galway in 1935. With those records, I obtained Mary’s birth certificate, her marriage certificate, and her death certificate. I had enough to prove my case for Irish citizenship.

But I knew I had to do something more. I had to find Mary’s final resting place.

I did the online searches for gravesites which took me to Menlo. The helpful volunteers at Ireland Reaching Out had come up with a recent funeral notice for one of Mary’s children. I knew the service was held in a church near Mary’s final resting place, so I was certain Mary’s own funeral would have been there in 1986.

The diocese gave me information on churches in the area, but when I inquired about Mary’s relatives, they went quiet. Was anyone from Mary’s family still alive, and were they in the area?

I emailed the Galway church stating that I would be in town. But did I really want to meet anyone who might share my Irish temper or might look upon me as an intruder?

Curiosity got the better of me. I planned my search for the cemetery (which came up only when I used the old-fashioned word “graveyard”). The 3D maps showed me Galway buildings, roadways out of town, and then stopped at a house that sits at the fork of the road. I restarted the search, rebooted, restarted my WiFi, but it kept freezing at that intersection in 3D mode.

I figured I could use the house I saw as a landmark to confirm my route.

Undercover and found out

I arrived at the church of St. Peter and St. Paul dressed for the graveyard. Although Mary’s death was 33 years before, it was somewhat new to me. In a black suit, black shirt, black tie I really must have looked like a 19th-century Irish undertaker… that is if Irish caretakers wore Prada oxfords.

The Mass was partly in Gaelic and I was charmed by the words as well as the Irish baby in its mother’s arms who seemed to be fascinated by my poor sartorial tastes.

I felt a hand on my shoulder. I jumped. Had I been found?

It was only two women offering their music sheet for me to sing along. I thanked them, with some relief. By now, I really wished I had not told anyone I was coming.

I scanned the congregation as I left the church next to last. A woman came over and greeted me at the door.

“You’re a stranger!” I said yes, that I was on my way to the Menlo graveyard. I asked if she knew Mary. She was cautious.

Then I said I know she died about 33 years ago and her funeral was at this church. Mary was my grandmother, I said, but she never knew my family. Although a daughter, Teresa, may have tried to contact us years ago.

Oh, she said, acknowledging the whole thing. “She was old”. I thought she said “she was ‘cold”, so I pressed for more information about her personality. Was she a tough woman I wondered? I told her I had a massive temper, she smiled and leaned in and said: “Mary had a bit of the devil in her”. Then the story poured out.

When I explained the letter that helped me locate Mary, I apologized for not answering Teresa’s questions. I am not certain the Irish Catholic family would appreciate a living scandal returning to their town but now I am here. The woman said Mary’s older daughter would hear “illegitimate” and have nothing to do with it. That’s the Irish conservative viewpoint I expected. But she said, “Teresa would like you.”

I hadn’t come here for validation, but the words were kind and genuine and I realized Mary was successful enough that a grandson she doesn’t know would come just to find her.

I asked for directions, and that’s when I got more than I expected. “Do you want to follow me? I can take you to the cemetery.” I was emotionally in no mood to protest.

The cars made their way through a series of unmarked roads.  She stopped and I thought she was going to wave me on, but she pointed to a house across the little road. “Mary lived there.” Mary lived there???

It was the house in the fork of the road where three times my Google stopped cooperating. Someone was making damned sure I noticed this landmark.

“It was a thatched roof when she lived there”, she added. "That was her last home?" I said. “Yes”.

We went just a bit further and came to the crest of a hill. The stone fence, the iron gate, were all much nicer than the satellite maps had shown. Behind us was a beautiful pond with ducks. We parked and her sister and sister’s husband had come along to join us.

The sun was shining this day, as it had for most of my Galway journey, but the ground was still wet from overnight rains. Walking downhill a bit, the woman pointed “there she is”.

As I walked forward, the trio turned away and were silent.

I couldn’t speak. Too much to say. I wanted this to be a private moment between us. But moments before, I got answers to questions I never expected and filled in the blanks of Mary’s life and that of my father and his family.

So much I wanted to say right there, so much wrong that I wanted to correct, so much gratitude for a long-ago decision for which there was really no choice.

Emotions took over and I could say nothing else. Righting myself while simultaneously wiping my eyes I turned to face my new friends. They offered to take a photograph. And they asked me for contact information for the family, but I did not hear from them. Perhaps they thought I was digging too much.

I wiped away few tears, as there was no sadness now. Mary's was a completed life and had other lives to her credit that would have made her proud. I hope she trusted that she did the right thing even though it meant she was giving away the only boy she would ever have.

Mary’s long-ago decision will never be forgotten. As long as Marie’s hell-raising grandson is still there to stir things up.

*Patrick Sheldon is a Journalist and retired CBS News Producer in New York. His work began at The Pittsburgh Press and includes reports for KDKA Radio and stage work with Pittsburgh Civic Light Opera. He has a home in the historic Scots-Irish neighborhood of Pittsburgh’s North Side and he is currently interested in business and journalism in Ireland and the EU.