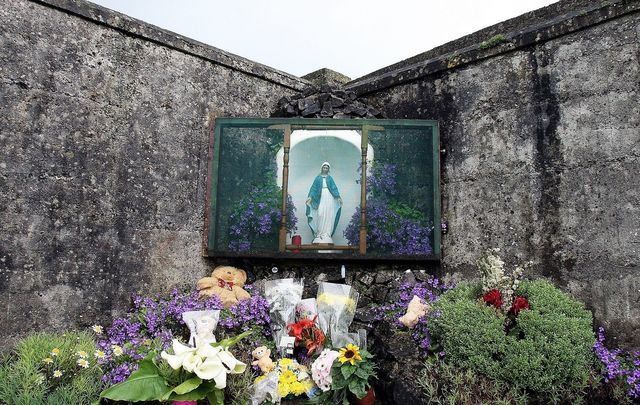 Tuam shrine erected in memory of the hundreds of children and babies buried at the site in a mass grave. Getty Images

The Tuam Oral History Project, which aims to give survivors of Mother and Baby Homes a chance to share their experiences of their time in the home and of their lives afterwards, was launched earlier this year by NUI Galway.

One survivor, Teresa O’Sullivan, a retired nurse who lives in Limerick with her husband and has two grown children, began her life in the Tuam home because she was born outside of marriage.

"That picture is very, very dear to my heart and I still shed a tear, 62 years on I still cry for that little baby and that's what I want you to know,” says O’Sullivan, referring to a photo of herself at the age of one, the only photo she has from her time in the mother-and-baby home.

"First of all I think, on my own behalf, I think I have lovely eyes but I also think there's a bit of a sadness about them as well, the way they're looking up.”

Teresa O’Sullivan was born into the #Tuam Mother and Baby Home. She told ⁦@TommyMeskill⁩ about her extraordinary journey to meet her mother, and find out more about her early life. Listen to Ep 2: #MorningIrelandExtra ⁦@nuigalway⁩ #TuamBabies https://t.co/OuYt5Gowj2

Her mother eventually came back to the home looking for her, but by that time Teresa had been adopted by a family in west Cork. The nuns at the home told her mother that she had messed up her life and she wouldn’t get an opportunity to mess up her daughter's.

O’Sullivan would reunite with her mother years later.

"I was very worried about what she wore,” she says of their meeting.

"I did not want her to feel that I hadn't got on well in life, that she had nothing to be guilty about or sorry for.”

Galway historian Catherine Corless uncovered the secret burial of hundred of children at the Bon Secours Mother and Baby Home in Tuam. She discovered official records showing that 798 infants and children died at the site of the home, which was run from 1925 to 1961. A significant quantity of human remains were found in septic tanks, reports RTÉ.

"Up to 800 children missing and then when we realised that they were placed in a former sewage area which was, we believe, a sewage tank. I think that was the epitome of heartache,” said Corless.

"It seemed to be the final insult to bury them without name, without a record and especially in a sewage tank.”

Taoiseach Leo Varadkar announced that excavations at the site will begin later this year.