Will Gerry Adams also be at the White House on St. Patrick’s Day?

A recent statement from Sinn Féin President Gerry Adams leads some to believe he plans to attend the White House ceremony on St. Patrick's Day. 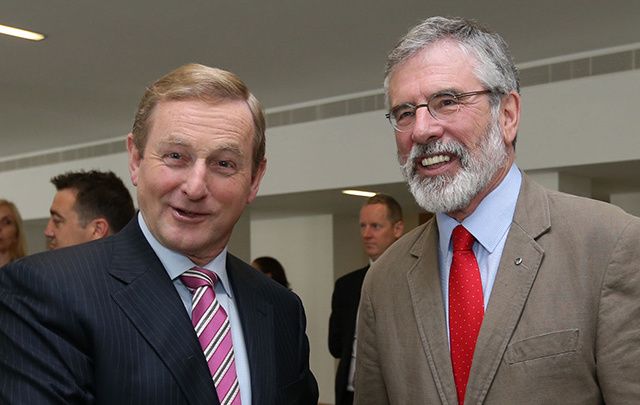 Taoiseach Enda Kenny and Sinn Féin President Gerry Adams may both be in the White House this St. Patrick's Day. RollingNews.ie

Taoiseach Enda Kenny and Sinn Féin President Gerry Adams won’t be coalescing in government anytime soon but it certainly looks like they will be cohabiting on St. Patrick’s Day under the White House roof.

Kenny stepped in it last week when he seemed to offer an opening to a possible future coalition between his Fine Gael party and Sinn Féin.

The kickback from his party rank and file was fast and furious.

Kenny backtracked, but his blushes were spared more by events three thousand miles from Dublin.

President Donald Trump’s executive orders on travel from seven Muslim-majority countries and the flow of refugees sucked all the oxygen up in newsrooms around the globe.

For Kenny, the narrative changed from a coalition with Sinn Féin to his travel plans for March 17.

The taoiseach has indicated his intention to travel to Washington D.C. for the annual St. Patrick’s Day celebration that includes a meeting with the president, presentation of a bowl of shamrock, and a reception in the White House.

Politicians and people in Ireland are divided over this, but the shamrock summit is definitely on.

Gerry Adams is expected to make the transatlantic journey, too.

Last year, the Louth TD turned up at the White House only to be turned away by the Secret Service due to some never completely explained security snafu.

US travel ban is in breach of EU/UN obligations. T must make clear he will NOT b implementing this at pre clearance in Shannon/Dublin #Dail pic.twitter.com/r9bxFNNlbu

Adams has not fully outlined his travel plans for this year, but all indications are that he will be in Washington on March 17 and while there, applying pressure on Enda Kenny to deliver some strong words to President Trump over the Waterford Crystal shamrock bowl.

Adams, in a statement, said there was widespread concern in Ireland, and across the world, about the Trump executive orders related to travel and refugees.

"The taoiseach has made clear his intention to go to the White House on St. Patrick's Day, but his visit cannot be business as usual,” said Adams.

"It is incumbent on him to relay to the U.S. president, in the strongest possible terms, the opposition of those in Ireland to these measures.

“He must also ensure that Irish airports do not enforce the fundamentally unjust order of the president. I have urged him to do this without delay.”

Adams did not elaborate on the matter of airports, as opposed to U.S. immigration preclearance facilities at those same airports.

He did, however, state general support for the annual visit to Washington D.C. by the Irish head of government.

"The celebration of St. Patrick's Day in the U.S. is not the preserve of any president or political party or tradition,” he said.

“It is Irish America's day and a time for our diaspora to celebrate their heritage and culture.

“It is a mark of these celebrations that they are inclusive and enjoyed by a wide range of opinion.

“Such diversity has always been a hallmark of the U.S. Developments in recent days are particularly worrying against that backdrop.

"The importance of Ireland's relationship with the U.S. is one Sinn Féin have played a role in building and supporting and will continue to do so,” Adams said.

This last statement would appear to be a clear indication that Mr. Adams and/or representatives of his party, plan to attend the White House gathering on March 17.

Adams has been a regular White House attendee in the years since the Good Friday Agreement.

Just as long as the great Irishman Gerry Adams can make it- and he won't have to wait outside the White House this year! #MAGA https://t.co/8JT5uvbj3J

Colum Eastwood, leader of the SDLP in the North, has indicated that he will boycott the White House celebration, though he is expected to attend other St. Patrick’s Day events in the nation’s capital such as the Speaker’s Lunch.

And opposition to Kenny’s visit is being voiced south of the border by the Labour Party, Green Party, and Anti-Austerity Alliance.

After reports that Trump, as President-elect, was invited to visit Northern Ireland by then First Minister Arlene Foster and Deputy First Minister Martin McGuinness, AAA TD Mick Barry called on Sinn Féin to withdraw the invitation.

Said Barry: "The letter of invitation was issued in November after his (Trump’s) victory by Sinn Féin and the DUP and was signed by Martin McGuinness and Arlene Foster.

“Since then, Trump has implemented a racist ban on Muslims entering the U.S, has pledged that he will make good on his election promise to build a wall with Mexico, and has appointed one of the wealthiest and most reactionary cabinets in history which will attack the rights of minorities, women and environmental legislation.

"The Sinn Féin leadership need to review this invitation and immediately withdraw it."

Food for thought either way for Mr. Adams who, of course, was barred for many years from the United States because of presumed links to the IRA until President Clinton revoked the ban.