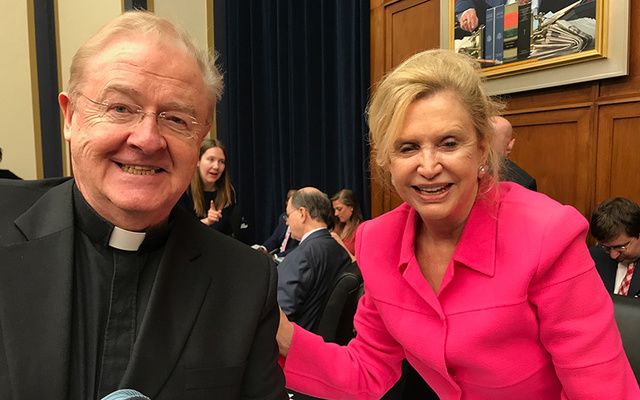 And at the center of it are the MacBride Principles.

The fair employment guidelines for Northern Ireland, that were so hotly debated around the United States in the 1980s and 1990s, are under a new threat as a result of a bill before the House Financial Services Committee.

This according to the Washington, D.C.-based Irish National Caucus which originated the national MacBride campaign at a time when Catholics in Northern Ireland were two and a half times more likely to be jobless than Protestants.

According to INC president, Fr. Sean McManus, the very existence of the MacBride Principles - which heavily depend on the ability of ordinary stockholders to influence corporate policies - is threatened by the Financial CHOICE Act, legislation that is being spearheaded by Financial Services Committee chairman, Rep. Jeb Hensarling, a Republican from Texas.

A committee hearing on the legislation held last week included a submission from New York Democratic Congresswoman, Carolyn Maloney that contained a statement by Fr. McManus.

There were actually two meetings, one on Wednesday, April 26 chaired by Rep. Hensarling and a second on Friday the 28th chaired by a surrogate.

At the first meeting, testimony was given by witnesses called by Rep. Hensarling and his Republican colleagues.

At the second meeting witnesses, led by Senator Elizabeth Warren, were called by the minority Democrats.

“I wholeheartedly agree with the Irish National Caucus’ concerns about the Financial CHOICE Act and am proud to have been able to make their concerns an official part of the official hearing record,” said Rep. Maloney in a statement.

“My peers in Congress need to hear from their constituents and Americans across the country about why they oppose this horrific bill that would roll back so many consumer protections and take us back to a pre-financial crisis world,” said the congresswoman, who represents New York’s 12th District.

“We enacted Dodd-Frank to prevent another recession, protect consumers, and strengthen shareholders’ advocacy. It is disturbing that we are now considering a bill to strip away those protections from everyday Americans,” Maloney added.

Read more: It’s not a stereotype - these are the Irish American occupations

Maloney submitted two statements to the April 28 hearing from the Irish National Caucus.

According to the Fermanagh-born Fr. McManus, if passed, the bill would, in effect, eliminate current rules for shareholders’ advocacy for worthy causes, exclude 99 percent of the American public, and would sabotage the MacBride Principles, a corporate code of conduct for U.S. companies doing business in Northern Ireland.

McManus has described the Hensarling bill as a “radical, extremist assault on shareholder advocacy.”

He said in a statement: “Currently, and for many years, one could submit a shareholder resolution provided one had for at least one year $2,000 worth of shares. However, if the extremist changes are passed into law, it would mean, for one example, to submit a resolution to Apple, one would need to own, for three years shares worth $7.5 Billion.

“When one considers that the MacBride Principles were twice passed by the Republican- controlled Congress (and signed into law by Democrat Bill Clinton in 1998), it is an extraordinary change in direction for Republicans.

“I cannot understand why they want to confirm the stereotype (which they claim is unfair) of Republicans only being interested in the super-rich.

“Their assault on shareholder resolutions identifies them with one percent of Americans, disdaining the 99 percent. I cannot believe that good, decent Republican Members of Congress want to be seen in such a light.

“The late, great Congressman Ben Gilman (R-NY) must be turning in his grave. It was Ben - God rest his noble Jewish-American soul - who, as Chairman of the House International Relations Committee, helped the Irish National Caucus to successfully push the MacBride legislation through the Congress.”

McManus said he was hoping that Congressman Peter King (R-NY), “a long time outspoken supporter of the Mac Bride Principles and of how the principles have combatted anti-Catholic discrimination in Northern Ireland,” would take the lead in convincing his fellow Republicans on the House Financial Services Committee not to sabotage the MacBride Principles.

Fr. McManus has written to all 64 members of the Financial Service Committee condemning the shareholder proposal.

“This would amount to a flagrant attack on America’s founding principle: ‘We the people,’” McManus said in an earlier statement, which was also submitted to the committee by Rep. Maloney.

“It would outrageously eliminate millions of citizens and the average American from having a say on the conduct of publicly held companies.”

The nine MacBride guidelines – passed by a number of states and municipalities – were enshrined into U.S. law in 1998.

Said a previous statement by the INC’s McManus, issued last week: “The principles were passed twice by the Republican-controlled Congress and signed into U.S. law by Democratic President Clinton.

“Furthermore, 116 companies have agreed to implement the MacBride Principles, and the principles have been passed into law by 18 States and numerous cities and towns.”

Said McManus of the bill’s effect on the principles: “What American can possibly condone this? And what member of Congress would vote to take away the voice of the ordinary citizen, franchising only the mega-rich?

“It is undemocratic, un-American, and surely should be the third rail of American politics for all members of Congress.

“This is an affront to all Americans. From a specifically Irish-American perspective, it would be the death-knell for the most effective campaign ever against anti-Catholic discrimination in Northern Ireland, the MacBride Principles.”

Fr. McManus stated, in part, in his letter to committee members: “This terrible initiative is not only an attack on basic American values but it will be seen as an attempt to sabotage the MacBride Principles which have played a key role in promoting equality and non-discrimination in employment in Northern Ireland, thereby making a vital contribution to the Irish peace process.

“I am totally confident in saying that the Irish National Caucus is reflecting the opinion of the majority of concerned Irish-Americans, Republicans and Democrats alike, when I respectfully you to take a strong stand against this un-American attempt to silence the voices of ordinary American citizens.

“Please respond promptly as we are publishing the position of all the Financial Service Committee members on this vital issue for Irish-Americans.”