Republicans argue that both sides knew going in that the Electoral College vote is what counted, that both candidates campaigned accordingly and that Clinton's massive win in California, a four million vote differential, was meaningless. 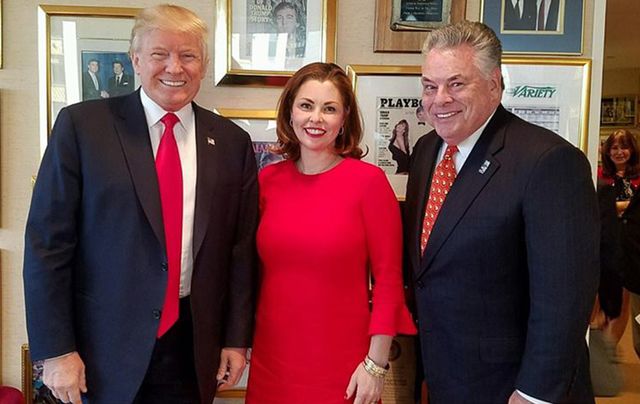 The Electoral College yesterday chose Republican nominee Donald J. Trump as the 45th President of the United States. He will be sworn in on January 20, 2017.

Many Democrats claimed the Electoral College defied the will of the people as Clinton won the popular vote by almost three million votes. The final tally showed Trump with 46.2% of the national vote and Clinton with 48.3%. The rest went to minor candidates.

Republicans, however, argue that both sides knew going in that the Electoral College vote is what counted, that both candidates campaigned accordingly and that Clinton's massive win in California, a four million vote differential, was meaningless.

“The Electoral College is acting in accordance with the wishes of the voters … that's democracy,“ attorney and former chairperson of The Irish American Republicans Grant Lally told IrishCentral.

“I've handled quite a few constitutional legal cases, so this is actually fascinating from a historical and legal perspective.”

“There has been a history of electors exercising that judgement and I'm glad that they did.”

“The election is over. In 2008, I worked very hard for Senator John McCain … but when he didn't win the election, I kept to the fact that the voters had spoken and chosen so I think that it isn't a productive process to protest a democratic vote.”

However, Stella O'Leary, head of Irish American Democrats, had a very different view.

She warned, “We should all be actively engaged and alert as he [Trump] attempts to erode the American Constitution.” O'Leary branded the president-elect “a disgusting, racist, sexist, selfish and unqualified demagogue.”

Milder reaction came from other Democrats. “Today, was just a process on the road to the president being inaugurated,” said John McCarthy, Vice-President of Irish American Democrats who worked on Faith and Heritage Community Outreach for Clinton during her campaign.

“I obviously would have hoped for a different outcome, but I wouldn't want it to be a distraction from the work that is in hand. I think Democrats are going to be sitting and thinking, ‘Well, where did things go wrong? What do we do next?’ And I was super proud  of the campaign that Hillary ran. I think that, looking forward, it's just more productive [not to be distracted by yesterday’s outcome].

“I think it was in her [Clinton’s] concession speech where she said that for now the best things we can do is be active citizens, to try to build a more fair and just society and I think that's the sense that everyone needs to sit and have.”

"The reality is at this point to look forward and as the election ended, I tended to think of the mindset of the people who depended on the party and our candidates before the election and how they still depend of us now.

“He [Trump] will be the president-elect and I think it's all of our shared responsibilities to look forward and see how can we be the best advocate for the community that is going to be most affected by the Trump administration.”

While the Irish American Republican organization did not endorse the president-elect during his campaign, Lally’s opinions on Trump’s transition period so far are in stark contrast to O’Leary’s criticism.

“I'm quite confident that we're going to continue to see very good people appointed and I'm very supportive of what he's been doing because they're good people and that's really the measure of an administration. In the end, it's not just one person.

"It's really a collective body of several thousand people in the executive branch who will become an administration, who write the rules, who review regulations, who see to the implementation of the laws and the regulations, who prepare budgets. It is a broad-based administration so I think he's done a very good job so far in ensuring that competent, capable, talented people are in his administration.”

McCarthy also has hopes for Trump’s cabinet – hopes that the division faced by the US post-election will be in some way mended by the president-elect’s future appointments.

“I'm kind of of the mindset that his success is our country's success so obviously I would wish him well,” he stated.

However another leading Irish American Republican Congressman, Peter King, was far from conciliatory over the weekend, calling for an investigation of CIA director John Brennan because of CIA claims that Russia hacked the election.

“Any hacking by the Russians in the 2016 election should be fully investigated by the House and Senate Intelligence Committees. As I discussed this morning on 'ABC This Week' that probe should include a full investigation of the conduct of John Brennan and others in the CIA who are leaking allegations to left wing, biased media outlets such as the New York Times about supposed evidence that the Russians were favoring Donald Trump.

“These allegations are contrary to what we have been told up to now that the Russians were not trying to favor Donald Trump or Hillary Clinton but were attempting to create doubt and uncertainty about the election results. Yet Brennan arrogantly refuses to present any evidence or information to Congress to back up such a serious charge. This appears to be an organized hit job vs the President-elect of the United States. Shameful!

Despite the vitriol on both sides, John McCarthy remained hopeful, even as an opponent of the GOP, that the better angels of the American nature would prevail.

“As Trump puts together a cabinet, as he puts together his government, I hope that he looks to include voices of those who have been supportive but also looks toward the common good of the country, that would be my hope.

“A lot of the feeling that I've seen coming out of the election has been that many people were looking to send a shock to the system, maybe not agreeing with him [Trump] on policy points. So as he puts together a cabinet I hope he recognizes that President Obama enjoys a high level of approval and success.

"I think a lot of the American people are going to be looking for someone who can help carry on that agenda and that vision of a fairer, stronger, more inclusive America, more than one that pits us against each other.”