Let's hear it for David Crosby! 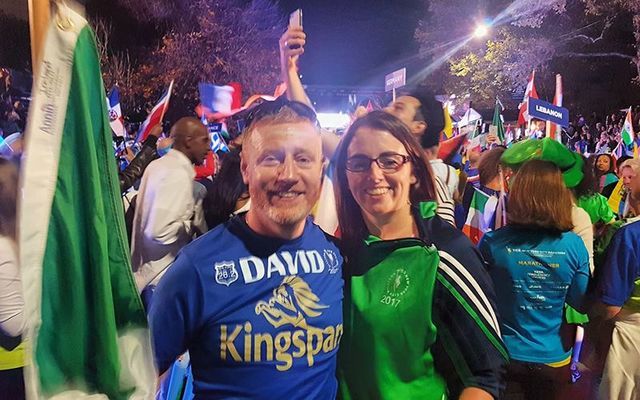 David Crosby’s heart never gave up, and neither did his donor’s lungs. That said he did have reason to doubt his feet and legs a few times along the way in Sunday’s New York City Marathon.

But with a little help from two running friends and the cheers of countless New Yorkers the Meath native and Cavan resident crossed the finish line to be greeted by his wife Katie and mother Kathleen Crosby - who had also completed the 26.2 miles odyssey through the city’s five boroughs.

“I never felt anything like it in my life,” David told IrishCentral's sister publication the Irish Echo, referring to the moment when he crossed that finishing line.

“It was fantastic, very emotional. I was sore but the lungs were one hundred percent,” he said.

“When I reached Central Park it all hit me,” he said.

“I was thinking about my family, my kids, all those who had helped me along the way, those running with me, my donor.”

Crosby, 42, had taken part in the marathon with a team of fourteen, mostly from Kingscourt, County Cavan, who had made the journey from Ireland.

Two members of that team, David McNally and Andy O’Brien, had run every yard with him and from time to time had helped revive sore feet and aching legs.

Other members, his mother and wife included, were running to pre-selected times.

David’s mother Kathleen is a very fit 61 and was waiting at the finish for her son.

But before the race she could not locate him for a while as she had been ferried to the Staten Island start in a different bus.

What followed was a search by a son for his mother that culminated in his finding her about ten minutes before the marathon got underway.

“She was very emotional,” said David.

And it was emotion as much as adrenaline and all those months of training that got David and his entire team through the hours of pounding the streets of New York from the Verrazano Narrows Bridge to Central Park.

“The crowds were fantastic,” David said.

“The kids were offering sweets and buns all the way along.”

This was David’s first marathon and he was delighted that it was in New York.

Today, and for the next couple of days, David will be walking the streets of Manhattan, slowly, and thinking about what might come next.

He is working in partnership with Cystic Fibrosis Ireland raising funds for the Lung Transplant Unit at the Mater Hospital in Dublin.

As part of his fundraising he is raising awareness of Idiopathic Pulmonary Fibrosis, a fatal condition that took three of his siblings and would have taken him only for someone’s decision in life to become an organ donor.

So David’s message includes the importance of becoming an organ donor.

And that message will be taken onwards to the 2019 World Transplant Games and perhaps to other marathons.

Once his legs and feet recover, the lungs being no problem at all.