"Failure is not an option, and I know now that after coming through this ordeal there will be nothing that we cannot achieve," says Cavan man David Crosby 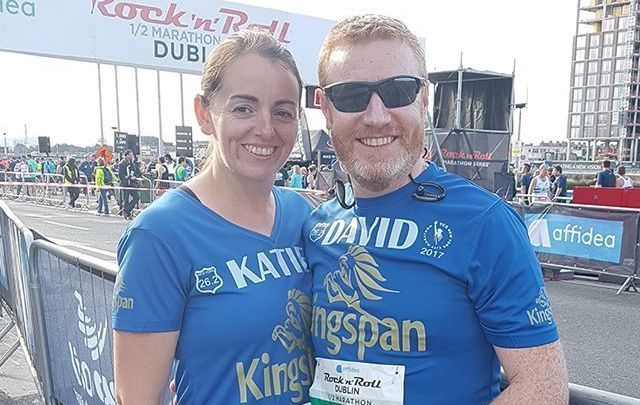 David Crosby will be putting heart and two souls into his running of the New York City Marathon.

And David, who lives in County Cavan, will be giving thanks for every hard mile, all 26.2 of them.

Thanks to someone he never knew, but someone who has enabled his run for life, and of a lifetime.

David is a husband and father of three children. He is the oldest of five children.

But he is also one of only two surviving children.

“I grew up knowing to make the most of life as I lost three siblings to a rare lung disease in childhood,” David says.

“I have a passion for sport and my biggest achievement was to be part of the Meath minor panel in 1993 and get to an all-Ireland final. Because of my fitness my health was never an issue.”

That, sadly, would not remain the case.

David explains: “In August, 2015, weeks after my fortieth birthday, I got a persistent cough that did not respond to antibiotics.

“I was referred for x-rays and scans that warranted further investigation and I had a lung biopsy in the Mater Hospital (Dublin).

On September 29th 2015 I was given the devastating results. I was diagnosed with IPF (idiopathic pulmonary fibrosis) which is scarring and hardening of the lungs.

“It is a progressive non-curable disease. At best the doctors hoped to slow it down with meds to buy me time.

“To say we were devastated would be putting it mildly. It was a day that my family and I will never forget.”

He continues: “In mid-December I was admitted back to hospital felling unwell. Unfortunately my disease was getting worse and it was decided that I would need a double lung transplant as soon as possible.

“After a series of forty tests I was deemed a good candidate, if I could lower my Body Mass Index.

“I started my diet immediately, determined not to let the weight stop me from getting on the transplant list for a chance of survival.

“I would go out walking with an oxygen pack on my back every day in an attempt to lose the weight and to get on that list. Over the next two months I achieved that hurdle in half the time given to me by the dietician and lost 35 pounds.

“I was on the list three days when I got a call in February 2016 for a possible match for a transplant. As a proud Meath man when getting into that ambulance I wanted nothing more than to see Cavan again, my family and home.

“Unfortunately, the transplant did not go ahead as the donor lungs were not viable and I was sent home again to wait.

“We were in turmoil thinking was our chance was gone. We put on a brave front for our children and carried on with our new way of life, waiting and hoping.

“Some days later I got another call for a possible match and from our previous experience we were cautious, not to get our hopes up. After seven hours waiting and dreaming of what could be it was confirmed that the lungs were a good match and the transplant was to take place.

It went smoothly, or so I was told, but I’m sure my wife and family did not have as smooth of a time as I did. After a few days without sleep (as I was afraid to go asleep because I thought I may not wake up again after all our family history) I recovered well and left hospital after thirteen days.”

“It is truly amazing how two completely different life paths can meet to create something so precious and life-saving. You are a legend to me. I hope to show people that I am an example of your hard work and dedication you provide on a daily basis.”

And all the other medical practitioners and caregivers who have opened the door to a healthy normal life.

“I also cannot say enough about the all the staff who helped me, with my build up to and recovery after my transplant, consultants, doctors, nurses, physiotherapists and anyone else who helped me along the way. I will never be able to thank you enough or put into words my gratitude I have for all your hard work and the amazing skills you provided to me.”

What David describes as “that remarkable day” was, of course, made possible by someone he never met, and never will meet.

“There is one person I will never get to thank in this world. My life was saved by someone whom I will never meet: my donor. My unknown hero and their family made a brave decision to donate organs.

“But it is more than that, it’s a gift of life, a second chance, and without them I would not be here. The donor and their family were going through what had to be a hard and difficult time and yet they found the strength to help others. I think about them every day, in things I do and think and say.

“They inspired me to push on, concentrate on important things which for me are my family and to try and give back somehow to all the people who helped me through this challenging time.

“I know what it is like for those patients and their families who are waiting for the call that may never come. As I said, before I lost three siblings. Regina passed away at seven months, Paul passed away at two years and a very special person Ciaran passed away at 11.

“Ciaran was on the transplant list and passed away while waiting for a heart and lung transplant. He fought hard in this world and seldom complained about it and throughout his illness his attitude and bravery was unbelievable.

“He was the type of child that was wise beyond his years and he loved the craic. He wrote a book on his life and experiences which were many for only eleven years called ‘Too Many Angels’ (available on Amazon). Organ donation awareness is so important. If only everybody knew how much they can help someone after they are gone.

“I have met families, whose loved ones have passed away and they made the decision to donate organs while they say they still feel their loved ones loss and always will, they feel a sense of pride for what their loved one has done in helping improve someone’s quality of life or in my case, save a life. They do hope the donor recipients are doing well.”

David has set for himself a series of challenges in honor and memory of his donor and to help in his long term recovery.

He explains: “First I completed the Joe Duffy five mile run in Clontarf on Nov 19, 2015 - eight months after my transplant. In March, 2016 I helped organize with friends and family and took part in a local 10 kilometer run, one year post-transplant.

With these three runs behind him David set his sights on an ultimate goal - this being a run through the five boroughs in the New York City Marathon, which this year takes place on Sunday, November 5.

“I am being joined in the New York marathon by thirteen family members and friends,” says David.

His entourage includes his wife, his mother, and also Dr. David Healy, a transplant surgeon from the Mater Hospital.

“I am working in partnership with Cystic Fibrosis Ireland in my fundraising and all money raised will benefit the Lung Transplant Unit and their research. This endeavor is completely self-funded so every penny donated is going directly to the charity.

“And it is my hope also to raise awareness of Idiopathic Pulmonary Fibrosis.”

And the importance of being an organ donor.

David will be carrying the Irish flag at the pre-marathon ceremony.

And so much more: The memories, hopes and dreams in his mind, love in his heart and the New York air in his lungs, yes, his lungs.

And while he will be surrounded by loved ones, not least wife Katie, David believes that the person who made his lungs a living reality will be with him at the starting line in spirit.

“In our home we have a family motto, just ask the kids, Kiera, Darragh and Erin,” he says.

“It is failure is not an option, and I know now that after coming through this ordeal there will be nothing that we cannot achieve.”