In an email to Irish Americans for Trump, Kimberly Guilfoyle said the President wants to speak "directly" with his supporters. 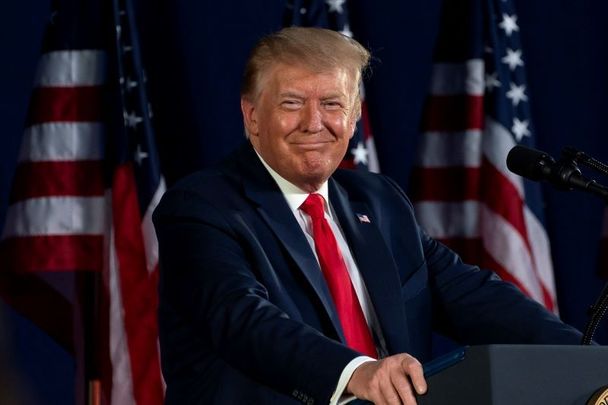 President Trump is expected to speak during a virtual campaign fundraiser scheduled for Tuesday, July 21, according to an email blast sent to the Irish Americans for Trump membership on July 16.

Recent polls have shown a slippage in support among White Catholics for Trump and he is keen to address it say aides.

The email was signed by Kimberly Guilfoyle, who currently serves as the National Chair, Trump Victory Finance Committee (TVFC), which describes itself as a "nationwide army of volunteer fundraisers playing a pivotal role to ensure President Trump’s campaign and the Republican Party have the most far-reaching ground game in the history of presidential politics."

Guilfoyle, who is currently dating President Trump's oldest son, Donald Trump, Jr, has strong Irish roots - her father is a native of Co Clare, and she spent plenty of time in Ireland growing up. 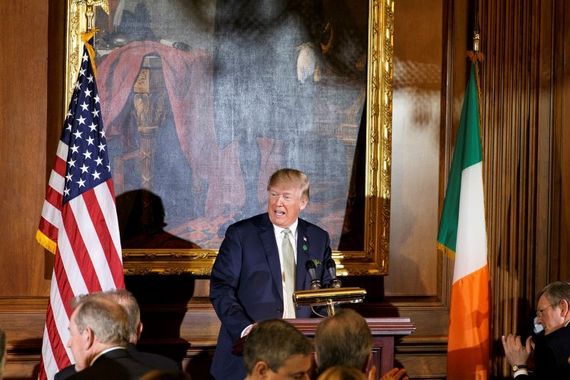 March 15, 2018: President Trump speaks at the Friends of Ireland luncheon hosted by United States Speaker of the House of Representatives Paul Ryan.

In the email blast that was sent on Thursday, Guilfoyle wrote: “Thank you for being a loyal member of Irish Americans for Trump. I spoke with President Trump last week and he told me he wants to speak DIRECTLY to his top supporters, which is why we are hosting our first ever Virtual Fundraiser with President Donald J. Trump on Tuesday, July 21st. We want all of our Irish Americans for Trump members to participate in this event and recruit FIVE OTHERS to do the same. You can RSVP for the event  and below is language for you to share via email, text message and on your social media to anyone you think might want to participate!

"As a member of the Irish Americans for Trump coalition, it is my honor to invite you to our first ever Virtual Fundraiser with President Donald J. Trump on Tuesday, July 21st! You can RSVP for the event here. President Trump needs our support now more than ever and I hope you will join me in contributing to his campaign!

"Election day is drawing near and your continued engagement and support is appreciated now more than ever. The Fake News media will never tell you the FACTS about President Trump’s accomplishments, which is why he wants to speak DIRECTLY to his supporters like you.

"Additionally, should you like to join the Trump Victory Finance Committee which is our nationwide network of volunteer fundraisers who are raising money in support of President Trump, please contact bundle@donaldtrump.com or visit www.donaldjtrump.com/bundle.

"Thank you for your continued support of President Trump and we hope you can join us on July 21st!"

The RSVP link included in the email blast directs to a "TRUMP PENCE VICTORY" page where supporters can join the Trump Victory Finance Committee (TVFC) and make a donation. It appears that those who wish to attend the virtual event on July 21 must make a donation beforehand.

The time of the event on July 21 has not yet been announced, but the RSVP page says that log in details will be provided to participants within 24 hours ahead of the event.

According to the RSVP page, the following people will be on hand for the virtual event on July 21:

Irish Americans for Trump was officially launched on March 17 - St. Patrick's Day - of this year. The website for the coalition reads: "Irish Americans across the country realize the importance of re-electing President Donald J. Trump. From creating a booming economy to putting America first, President Trump is the reason that Americans are thriving. Four more years of President Trump means four more years of historic job creation, slashing taxes, and greater opportunities for generations to come."

Ahead of St. Patrick's Day 2020, the Trump Make America Great Again Committee unveiled a line of Irish and Irish American themed merchandise for purchase, which are still available online.

Will you be attending the virtual campaign fundraiser for President Trump on July 21? Let us know in the comments, below