The Fox presenter spent her summers in Ennis, Co. Clare, working in her family’s store and even studied law in Trinity College Dublin. 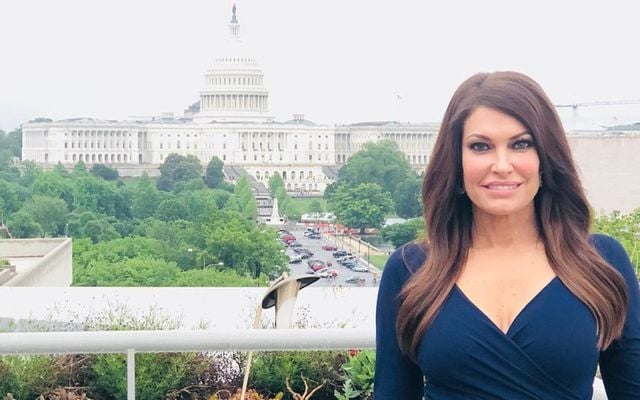 Kimberly Guilfoyle and Donald Trump Jr. enjoy dinner in New York before jetting to D.C. Guilfoyle’s father emigrated from Ireland in his 20s.

First Son Donald Trump Jr.’s new rumored flame, Fox Host Kimberly Guilfoyle, is the daughter of an Irish immigrant who claims that she has an “immigrant mentality.”

Guilfoyle, 49, told The Times UK in 2017 that her time in Ireland and her father’s immigrant experience influenced her heavily, especially in terms of how she manages her money.

“Do not live above your means, try to save and don’t be too quick to spend it,” she said.

“I have an immigrant mentality — always keep a safety net to fall back on.”

The Fox presenter’s late father Tony Guilfoyle immigrated to the US from Ennis, Co. Clare in his 20s and Guilfoyle returned there every summer, working in her family’s local store. She even stayed in Ireland to study law at Trinity College Dublin. Before joining Fox in 2006, Guilfoyle worked as a prosecutor in San Francisco, then as deputy district attorney in Los Angeles.

Read more: Donald Trump Jr could have learned about the Russians from Michael Collins

Twice divorced Guilfoyle has been linked to Don Jr. for several weeks, following the eldest First Son’s split from his wife in March 2018. While the pair was spotted together following President Trump’s State of the Union address in January 2018, which Guilfoyle covered for Fox, the relationship is believed to have started after Don’s estranged wife Vanessa filed for divorce. Since the split, it has been revealed that Don Jr had an affair with Aubrey O’Day.

Throwback to the Operation Renewed Hope Foundation Gala in DC with our son Ronan and his father Eric. Very honored to have hosted this event again in our efforts to end veteran homelessness. Grateful to the men and women who faithfully serve our country fighting to protect our liberty and freedom! 🇺🇸 @orhfoundation #operationrenewedhope #operationrenewedhopefoundation #armynavycountryclub #4veterans #lifewithapurpose #riseupandmakeadifference

Guilfoyle also has an 11-year-old son named Ronan from her second marriage to Eric Villency, the CEO of a design firm. She was previously married to Gavin Newsom, a Democrat and California’s Lieutenant Governor.