A new poll has found that six in every 10 'devout' Catholics in the United States plan to vote for Donald Trump in November's presidential election. 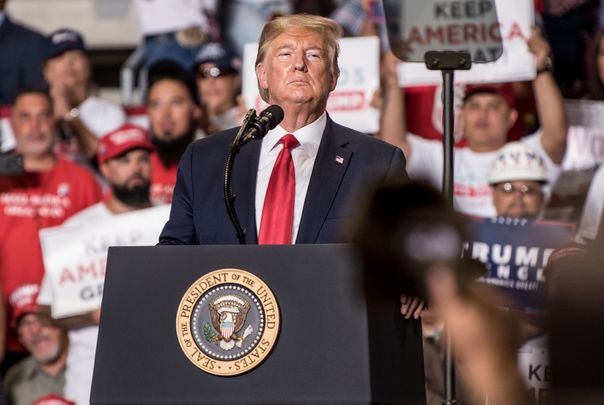 A new poll has found that six in every 10 'devout' Catholics in the United States plan to vote for Donald Trump in November's presidential election.

The opinion poll, conducted by EWTN News/RealClear, also found that the incumbent US President is in a stronger position amongst Catholics in general than he was in November last year, at the time of the last poll.

The poll surveyed 1,521 American citizens who identified as Catholic and carried out a number of tests to see how devout they were.

Read more: A piece of US Irish history gifted to Ireland by Donald Trump

Of the people surveyed, 18% unequivocally accepted all of the church's teachings, while 38% accepted most of the teachings. The remaining 44% said that Catholicism had a more minor influence on their lives.

The poll found that slightly less than half of all Catholics approve of Donald Trump at 47%, up from 44% in November.

In addition, just over one-third (34%) of all Catholics said that they would definitely vote for Trump again when they go to the polls this fall.

However, this was substantially higher among Catholics who identified as devout.

A significant 59% of devout Catholics intend to vote for Trump, according to the poll, while he has an approval rating of 63% among them.

On the other hand, only 20% of devout Catholics in the United States say that they would never vote for Trump.

Catholics generally feel that Trump has had a positive influence on the US economy and 58% believe that the country is better off financially than when he became president four years ago. Similarly, 63% of Catholics say that they are personally better off.

Having said that, the poll also found that all Catholics would vote for any of the Democratic nominees ahead of the incumbent President this year.

Of the Democratic candidates, Joe Biden was the most popular among Catholics with 51% of those surveyed saying that they would vote for the former Vice President if he ran against Trump, who received just 40% support.

Bernie Sanders was the second most popular candidate with 50% of Catholics saying that they would vote for him against Trump (41%).

Mike Bloomberg, a latecomer to the presidential race, has come from nowhere to emerge as the third most popular candidate amongst Catholics.

The billionaire placed seventh among Catholics in November's poll, but now 48% of Catholics say they would vote for him if it is a choice between him and Trump, with just 39% of voters backing Trump.

Elizabeth Warren and Pete Buttigieg also placed ahead of Trump, but the results were much closer.