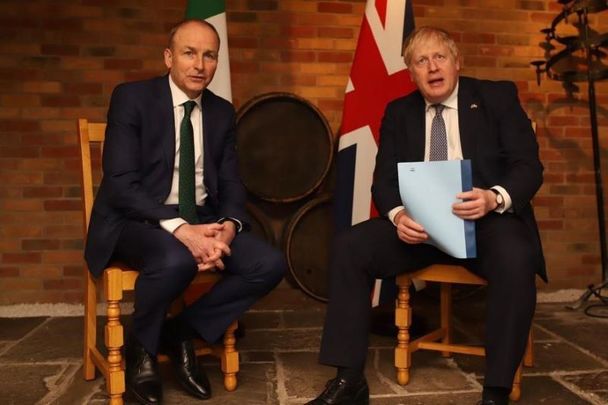 March 12, 2022: Taoiseach Micheál Martin and British Prime Minister Boris Johnson in the stands ahead of a Guinness Six Nations match during the Taoiseach's visit to UK England. RollingNews.ie

Boris Johnson announced today, July 7, that he will be stepping down from his position as Prime Minister of the United Kingdom. The announcement comes as nearly 60 members of his Cabinet resigned from their roles in the past day.

Johnson said he has appointed a new Cabinet to serve, and that he will remain in his position until a new leader is in place.

His resignation comes amidst a period of considerable friction for Irish and British relations, stemming from issues surrounding Brexit and its Northern Ireland Protocol, as well as the British government's proposals on legacy matters from The Troubles.

In Ireland, Taoiseach Micheál Martin responded, saying in part that the partnership between the British and Irish governments “is a key underpinning for peace and prosperity on these islands.

“While Prime Minister Johnson and I engaged actively together, we didn’t always agree, and the relationship between our governments has been strained and challenged in recent times.

"Our joint responsibilities concerning stewardship of the Good Friday Agreement, as well as nurturing broader bilateral relations between us, require us to work together in a spirit of respect, trust and partnership. That is more important than ever today and I would once again urge a pulling back from unilateral action, whether that be on dealing with the legacy of the past, human rights, or the Northern Ireland Protocol.

“We have now an opportunity to return to the true spirit of partnership and mutual respect that is needed to underpin the gains of the Good Friday Agreement.

"I welcome the fact that the United Kingdom and the European Union are working together closely in response to Russia’s war of aggression on Ukraine. We need to see that approach extended to addressing other challenges, including the practical issues around implementation of the Northern Ireland Protocol that are of genuine concern to people and businesses in Northern Ireland.”

He concluded: "I remain committed to working with the British Government and Prime Minister in that spirit in the times ahead."

Simon Coveney, Ireland’s Minister for Foreign Affairs, said in a tweet that the Irish government “stands ready” to work with a new UK Prime Minister, and called for getting Stormont up and running.

The Irish gov stands ready to work with a new U.K. PM on protecting our shared achievements in the peace process & our shared responsibility under international law on #Brexit. Let’s start with getting a government in Stormont. I wish @BorisJohnson & his family well.

Mary Lou McDonald, the President of Sinn Féin, said “Boris Johnson's interactions with Ireland have been wholly negative” and that he “will not be missed.”

Boris Johnson's interactions with Ireland have been wholly negative - Brexit, attacks on the Good Friday Agreement, threats to break international law, austerity and placating the DUP - all in a self serving attempt to cling to power. He has come unstuck. He will not be missed.

McDonald said in a further statement: "Under his [Johnson's] leadership, the British government has consistently undermined the Good Friday Agreement and have threatened to breach international law on multiple occasions.

"They have foisted austerity on people. They brought us the disaster that is Brexit.

"And Boris Johnson's priority when it comes to the north has been to placate the DUP.

"We are now over two months on from the Assembly elections. Michelle O’Neill is the First Minister in waiting. The Executive and the Assembly need to be re-established.

"Whoever now assumes the position of British Prime Minister needs to change tack, work to restore the north's political institutions, and they need acknowledge the primacy of international agreements and international law."

In Northern Ireland, Michelle O’Neill, the Vice President of Sinn Féin and the First Minister-designate of Northern Ireland, echoed McDonald’s comments, saying Boris Johnson is “a figure of absolute disrepute.”

It has been an utter absurdity that the people here have been subjected to Boris Johnson for any length of time. He is a figure of absolute disrepute. Anyone who tries to sabotage our peace agreements, a quarter century of progress and our shared future is truly no friend of ours

O’Neill also took aim at Brandon Lewis, who earlier this morning announced his resignation as Northern Ireland’s Secretary of State, saying he “undermined the Good Friday Agreement and our political stability by placating the DUP.”

Brandon Lewis undermined the Good Friday Agreement and our political stability by placating the DUP, and his actions gave us a daily reminder why those with no mandate or votes here will only ever act in their own political interests, and never ours.

O’Neill said that she has spoken with Shailesh Vara, who is set to replace Lewis: “I told him that he is the seventh British Secretary to fill the post under this Tory Government, and that while their priorities lie elsewhere, it is his duty for however short his tenure, to work constructively and even-handedly to restore power-sharing.”

O’Neill said that Vara’s predecessor had undermined political stability at every turn, and that she made her position on Lewis "clear" to Vara.

She continued: “The British government needs to accept its responsibilities and start working with all the Assembly parties, and the Irish Government to restore the Good Friday Agreement institutions, and stop placating the DUP who are in a needless stand-off which is unjustly punishing the public.”

Sir Jeffrey Donaldson, the head of the Democratic Unionist Party (DUP) in Northern Ireland, said: "It is no secret that we believed that Boris Johnson had a duty to get rid of the Irish Sea border having disastrously gone against our advice and signed a Withdrawal Agreement containing the Protocol."

He added: "Fully functioning devolved government in Stormont and the Protocol cannot coexist.”

Jim Allister, head of the Traditional Unionist Voice (TUV) party, also hit out at the Protocol, labeling it as "iniquitous."

With Westminster in state of flux, it is more imperative than ever that Unionism holds firm in using Stormont leverage against the iniquitous Protocol.

Stephen Farry, Deputy Leader of the Alliance Party in Northern Ireland, said Johnson "doesn't have the authority, credibility or legitimacy to carry on as acting Prime Minister."

Not a word of acknowledgement or reflection from @BorisJohnson on the circumstances of his downfall, the corruption, the lying, the poor judgement and the collapse of his government

He doesn't have the authority, credibility or legitimacy to carry on as acting Prime Minister.

Colum Eastwood, head of the Social Democratic and Labour Party in Northern Ireland, said: “Boris Johnson has debased the office he holds, he has fundamentally and indelibly damaged public confidence in politics and public life and his death grip on power has prolonged a period of government that will be characterised by law-breaking, scandal, and sleaze."

Eastwood echoed Farry's sentiment that Johnson should leave immediately. He further said, "Relationships across these islands and outcomes for the people we represent would be far better served by a new administration led by the Labour Party."

Boris Johnson’s government will be remembered for its sleaze, lies, law-breaking and scandal and has trashed relationships across these islands, Europe and America.

When he goes, people should be given the chance to end 12 years of Tory misrule. pic.twitter.com/tduv5z2s7J

Gerry Carroll, People Before Profit MLA for West Belfast, said that Johnson's resignation is "long overdue," and called for a general election "to allow people the democratic opportunity to finally boot the Tories out of office.”