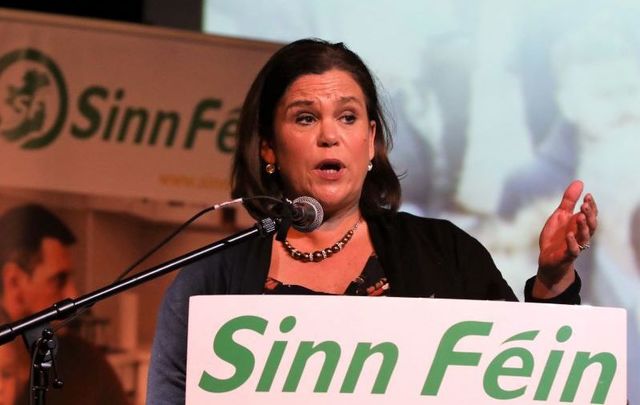 Sinn Féin leader Mary Lou McDonald has been forced to cancel two public meetings in Ireland this week after revealing that her children attend the Dublin school where a case of coronavirus has been confirmed.

Ms. McDonald took to Twitter on Monday afternoon to release a video in which she announced that the public meetings fixed for Cavan (Monday) and Galway (Friday) would have to be postponed.

She said it was a “worrying time” for the staff and families at the Dublin school, particularly for the family of the young student who has contracted the virus.

We're at home with the kids after a confirmed case of the coronavirus at their school. I’m postponing meetings in Cavan + Galway as I’d like to stay close to home but I’ll be back at work tomorrow. Stick to the medical advice, wash your hands with warm soapy water. Stay safe. pic.twitter.com/32SLFfLiDn

The school has been forced to close for the two weeks and the boy is currently being treated in a hospital isolation unit.

The first coronavirus case in the Republic was confirmed at the weekend and, while the Irish health authorities did not wish to identify the exact school, news of which school had closed down for 14 days had spread via social media.

It is understood the boy’s case relates to travel from an affected area in northern Italy, an area which is popular with Irish school groups for skiing trips during the February mid-term holidays.

"My children's school is closed for the next fortnight because of a confirmed case of the coronavirus,” said Ms. McDonald. “Obviously, we are following all of the chief medical officer's advice and, therefore, the children have to be at home for the next 14 days.”

She wished the young man affected a “speedy recovery” and said that she had to reorganise her entire work schedule because of this development at the school.

But she promised to set a new date for the public meetings in Cavan and Galway very soon.

Ms. McDonald urged people to listen to the advice of medical experts and to wash their hands with soapy water.

The Dublin school is keeping its doors closed for two weeks as a precaution after the male student contracted the virus on a trip to northern Italy. He is currently in a hospital isolation unit in the capital.

The Director of the Republic's Health Protection Surveillance Centre said efforts were underway to identify and locate people who came into contact with the boy who has been diagnosed with Covid-19.

"This is not unexpected. We have been preparing for this eventuality for many weeks now. Public health protocols have been in place since January and are operating effectively,” said Dr. Tony Holohan, the Chief Medical Officer of the Republic of Ireland.

"The health service is well used to managing infectious diseases and has robust response measures in place."

Last week, the Irish Government announced that an international Six Nations rugby game between Ireland and Italy, fixed for the Aviva Stadium in Dublin this Saturday, should not go ahead because of the outbreak of the virus in Italy.

Following a meeting with the Minister for Health, Simon Harris, the Irish Rugby Football Union (IRFU) reluctantly agreed to call off the game which was expected to attract 51,000 fans to the capital.

The postponement of Sinn Féin’s two public meetings comes amid uncertainty over the formation of the next Irish Government, after the February 8 General Election left all of the major parties well short of a majority.

Sinn Féin (37 seats) won the highest number of first preference votes (24.5%), but are still a long way off the 80 seats required to form a Government, while Fianna Fáil (38) and Fine Gael (35) are refusing to do business with Ms. McDonald’s party.

Indeed, Sinn Féin themselves did not anticipate the massive surge in support they experienced in the General Election and would have won more seats if they had fielded more candidates.

The public meetings so far in Cork, Dublin, and Newry have drummed up huge support for the party, even though An Taoiseach (Prime Minister) Leo Varadkar accused them of a “campaign of intimidation and bullying” by holding rallies across the country.

There was further good news for Sinn Féin at the weekend when a new opinion poll showed a dramatic increase in support for the party, putting them 15 points ahead of their nearest rivals and 10% up on the general election result three weeks ago.

Fianna Fáil (20%, down two) and Fine Gael (18%, down three) have slipped further behind Ms. McDonald’s party, according to the Behaviour & Attitudes poll on behalf of The Sunday Times.

The poll showed that Ms. McDonald was also the most popular party leader in the country, with a satisfaction rating of 53% (up 13% on the last equivalent poll).

It seems that the party once known as the political wing of the Provisional IRA can do little wrong at the moment, even after a week in which the leaders of Fianna Fáil, Fine Gael, and the Garda Siochana (the Republic’s police force) have all claimed that the party is controlled by “sinister figures”.

Critics have claimed that an unaccountable Ard Comhairle, based in Belfast, controls every aspect of the most popular party across the island of Ireland.

The Garda Commissioner, Drew Harris, said he agreed with his counterparts in Northern Ireland that the “Provisional Army Council” still oversaw both the IRA and Sinn Féin, almost 22 years on from the Good Friday Agreement which brought peace to the island.

Both Fianna Fáil and Fine Gael insist that they will not talk to Sinn Féin about forming a new Government, and they plan to hold a one-day policy seminar later this week.

But the response to the public rallies in Cork, Dublin, and Newry has shown that many voters are now echoing Sinn Féin’s call for change after almost a century of uninterrupted rule by either Fine Gael or Fianna Fáil.