The IRFU announced after a meeting with Health Minister Simon Harris that the upcoming Ireland-Italy Six Nations rugby match at Dublin's Aviva Stadium has been canceled amid coronavirus fears. 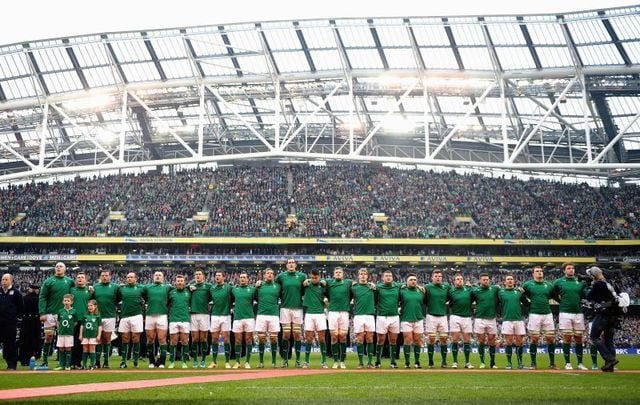 Ireland prepares to face Italy at the Aviva Stadium during the 2014 Six Nations tournament. Getty Images

Update 10:15 am, February 26: Following a meeting with Ireland's Health Minister Simon Harris, the Irish Rugby Football Union (IRFU) issued this statement confirming that the upcoming Six Nations rugby match between Ireland and Italy has been canceled:

The IRFU had a positive meeting with Minister Harris and his advisors today, where we requested a formal instruction as to the staging of the Ireland v Italy international matches over the weekend of 6/8 March.

At the outset we made it clear that the IRFU was supportive of the Governments’ need to protect public health in relation to the Coronavirus.

We were then advised, formally, that The National Public Health Emergency team has determined that the series of matches should not proceed, in the interests of Public Health.

The IRFU is happy to comply with this instruction.

We will immediately begin to work with our Six Nations partners to look at the possibility of rescheduling the matches and would hope to have an update on this in the coming days.

The below was published on February 25:

The upcoming Six Nations rugby match between Ireland and Italy scheduled for March 7 in Dublin's Aviva Stadium could be canceled as Ireland's Minister for Health Simon Harris has advised against the gathering in response to the spread of coronavirus in Italy.

Read More: Irish among those on lockdown in Italy during deadly coronavirus outbreak

The Irish Minister for Health Simon Harris said on February 25 that the game, which would attract some 51,000 spectators, would constitute a significant public health risk as an estimated 3,000 to 5,000 fans were expected to travel from Italy to the Irish capital for the game.

Minister for Health Simon Harris has said the Ireland v Italy Six Nations game scheduled for Dublin next month should not go ahead due to the coronavirus outbreak in northern Italy pic.twitter.com/ibpgpI9RlQ

“The very clear view of the public health emergency team was that this game should not go ahead, that it would constitute a significant risk, because a very large number would be traveling from what is now an affected region,” Minister Harris told RTE television on Tuesday night.

“So my department will be contacting the IRFU in relation to this. I know it will come as a great disappointment to many, but it is important that we make decisions in relation to public health, above and beyond all other considerations.”

The Irish Rugby Football Union is seeking a meeting with Minister Harris to clarify the Government’s position, as international rugby games are scheduled months in advance and it will be difficult to reschedule the game as the players have commitments with their clubs.

Simon Harris later confirmed that he indeed would meet with the IRFU on February 26 to discuss the matter.

Pleased to confirm I will meet with the IRFU in the morning. Today’s decision was not taken lightly but we must act on the basis of public health advice

The call to cancel the big game in Dublin will also apply to games between the Irish U-20 team and the women’s team and their Italian counterparts on the same weekend.

Considering that tickets for big international rugby games are sold weeks in advance, it is believed that some Italian rugby fans will still travel to Dublin on the weekend of the game.

A number of towns in Northern Italy are in lockdown and 11 people have died in the region. The largest outbreak of coronavirus in Europe has been in Italy, where more than 320 cases have been confirmed.

Villages in the Lombardy region, in particular, have been put on lockdown and security measures have been put in place in a bid to stem the spread of the disease, according to the region’s health department.

So far, there have been no cases of Covid-19 in Ireland; 90 suspected cases of the virus have all tested negative.

Minister Harris said the Irish authorities had a responsibility to act quickly in the interests of public health.

He said there was no travel ban in place to stop Irish people travelling to Italy, but the Government has urged people not to make any unnecessary journeys to the affected areas, which include China, Hong Kong, South Korea, Singapore, and now the northern region of Italy.

“While there is not a travel ban in place, and we are not stopping flights coming in, nobody wants to get sick or to see the spread of the virus,” he told Newstalk FM in Dublin.

“We will expand the list of affected regions in the coming hours. A legal ban on travel is unlikely, but we will advise citizens against travelling in the interests of their own health and public health.”

A number of school groups across Ireland, north and south, have returned from mid-term ski trips to Northern Italy, as last week a holiday for many schools. So far, though, none of the children involved have shown symptoms.

Minister Harris made his comments on Tuesday following a meeting of the National Public Health Emergency team at the Department of Health. The meeting took place to allow the Irish health authorities to review preparations for coronavirus.

In a statement, Ireland's National Public Health Emergency Team is expected to come out with new recommendations in the coming days in relation to mass gatherings such as major sporting events.

The team has insisted that anyone who has been to one of the affected regions in the last two weeks who is experiencing symptoms to self-isolate and call their GPs.

The Italian government has placed travel restrictions on ten towns in the north of Italy and Irish holidaymakers are among 1,000 guests at a hotel in the Canary Islands, Spain, which has been put in lockdown after an Italian doctor and his wife tested positive for coronavirus.

Health authorities on the island of Tenerife, which is very popular with Irish holidaymakers, ordered the lockdown of the H10 Costa Adeje Palace Hotel after the doctor complained of feeling ill before testing positive for the virus on Monday.

His wife tested positive the following day, prompting the health authorities to forbid guests from leaving the complex.

The health authorities in Ireland have urged people with symptoms, which are similar to the common cold and the flu, to self-isolate and to attend their GPs for testing.

Minister Harris urged people in Ireland who have concerns about the coronavirus to visit the HSE's website dedicated to the virus.

Were you planning on traveling to Dublin for the upcoming Ireland - Italy Six Nations rugby match? Let us know in the comments