Irish American Claire D. Cronin has officially assumed her role as US Ambassador to Ireland during a ceremony with President Michael D. Higgins at Áras an Uachtaráin. 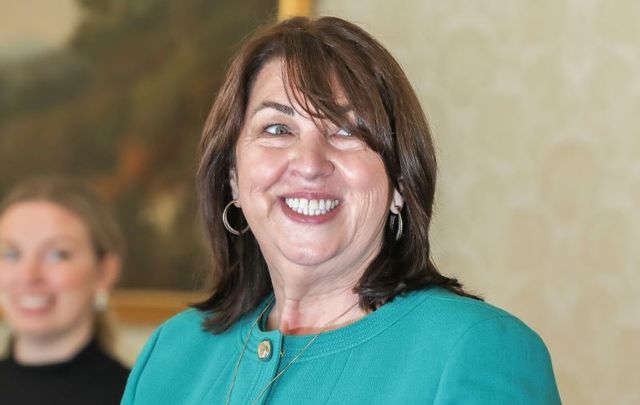 Claire D. Cronin presented her credentials to President of Ireland Michael D. Higgins at a ceremony in Dublin’s Áras an Uachtaráin on February 10, officially assuming the office of United States Ambassador to Ireland.

"I am deeply honored to serve as US Ambassador to Ireland," Cronin said after presenting her credentials on Thursday.

“My grandfather hailed from County Donegal, and I feel a great sense of connection to Ireland and its people.

“As Ambassador, I plan to build on our important relationship by advancing mutual interests, as well as cooperating with my Irish partners in addressing global challenges facing our two countries.”

Ambassador Cronin, who arrived in Ireland on Wednesday, February 9, was joined at Áras an Uachtaráin on Thursday by her husband, Ray, and their two daughters, Kara and Kerry.

The US Embassy in Dublin also shared a welcome video featuring Cronin on Thursday as she officially begins her role. In the video, Cronin said she is “honored” to be US President Joe Biden’s choice to serve as the US Ambassador to Ireland. Cronin was a key campaigner for Biden in her home state of Massachusetts, where she was serving as the Majority Leader of the Massachusetts House of Representatives, the first female to hold the position.

“As a proud American with family ties to Ireland, I am excited to return to the land of my ancestors at a time of so many opportunities for both countries,” Cronin said in the video.

“My grandfather left Ireland for a future in America full of hope and promise. He would be thrilled to see his granddaughter return to these shores as the US Ambassador. It is a dream come true.”

She continued: “President Biden entrusted me as the US Ambassador to Ireland at a very important moment. As his eyes and ears here in Ireland, I plan to engage with politicians and other stakeholders. President Biden is unequivocal in his support for the Good Friday Agreement, a historic achievement that must be protected to ensure peace and stability in Northern Ireland.”

Cronin also pledged to grow the “mutually beneficial economic relationship” between the US and Ireland.

Cronin said it was a “thrill” to move into Deerfield House in Dublin’s Phoenix Park, the home of the US Ambassador to Ireland. “I look forward to opening these historic doors in welcoming Irish friends and colleagues, whether for business, diplomatic meetings, or cultural events like the Embassy’s Creative Minds series.”

She added: “President Biden once recalled his grandmother’s words that the best drop of blood in you is Irish. I have to agree with him. I will cherish every moment here as US Ambassador to Ireland and I will always work to raise prosperity in both of our countries.”

Cronin, who was first reported as being considered for the ambassadorial role here on IrishCentral, was nominated in June by President Joe Biden and she was later confirmed by the US Senate in December. She formally resigned from the Massachusetts House of Representatives in January to be sworn in as Ambassador.