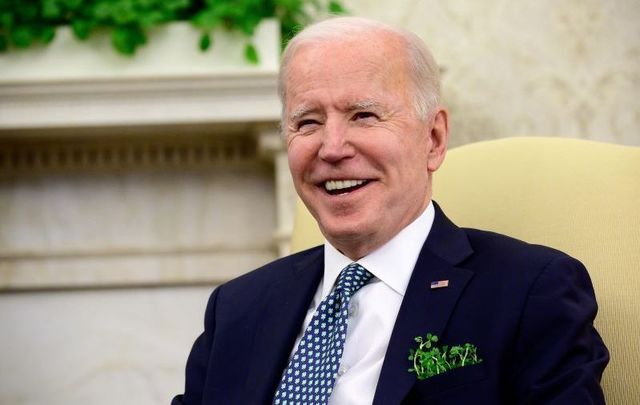 March 17, 2021: US President Joe Biden speaks during a virtual meeting with Taoiseach Micheal Martin in the Oval Office of the White House in Washington, DC on St. Patrick's Day. Getty Images

US President Joe Biden is reportedly set to visit Ireland later this year.

"It is wonderful news for the country that the US President plans to make a visit, but it is especially exciting for Co Louth, Biden’s ancestral home,” Andrea McKevitt, a distant relative of President Biden and a Louth County Councillor for Dundalk Carlingford, said over the weekend.

“We have all been anticipating this visit since his election to the Oval Office in 2020, so to hear the wheels are in motion for this trip is very welcoming."

The Sunday Times reported on Sunday that Taoiseach Micheál Martin and other senior government officials have told Fianna Fáil TDs that Biden is set to visit Ireland this year. The dates of Biden’s Irish visit, reportedly set for mid-July, are expected to be finalized when Martin visits the White House on St. Patrick's Day.

McKevitt added: “No doubt the Stars and Stripes, will be flying high beside the tricolours when Joe and the cavalcade re-appear on the peninsula, until then we will be eagerly waiting on this highly anticipated visit because after all, there’s no show like a Joe show!’’

Biden’s great-grandfather James Finnegan emigrated from Co Louth to the US as a child in 1850. 170 years later, a campaign to support Biden’s bid to win the US Presidential election was launched in Carlingford, Co Louth. Areas in Co Louth were decked out with American decorations during the 2020 US Presidential election when Biden ultimately bested incumbent President Donald Trump.

Biden last visited Ireland in an official capacity when he was Vice President in 2016. His trip featured stops in Dublin, Mayo, and Louth.

The day before his visit, Biden wrote: "James Joyce wrote, 'When I die, Dublin will be written on my heart.'

Biden again visited Ireland in September 2017. During that visit, he turned the first sod at a new Mayo Roscommon Hospice Foundation center in Castlebar, Co Mayo.

While still on the campaign trail in 2020, he reportedly told his Irish cousin Laurita Blewitt: “My priority as President will be to come to Ireland."

Shortly before Biden’s inauguration in January 2021, Taoiseach Micheál Martin extended an invite for the President to visit, which, not surprisingly, Biden was very receptive to.

“When I invited President Biden to Ireland, he just said, 'try and keep me out.' So it won’t be any lack of enthusiasm on his side," Martin said in January 2021. Martin is expected to reiterate the open invite during his visit to Washington, DC next month.