The Cahill family has been removed from the American Irish Historical Society board after 40 years in efforts to revitalize the ailing organization’s historic townhouse NYC headquarters. 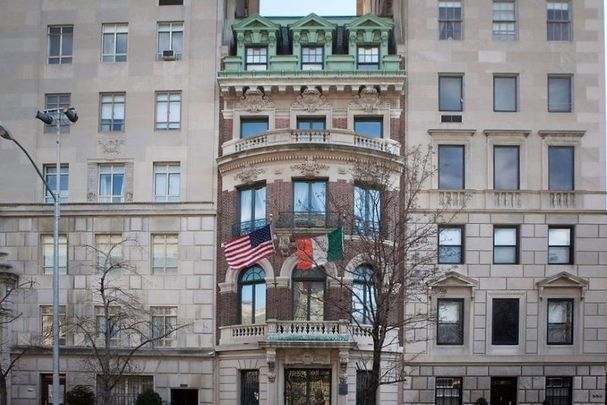 The American Irish Historical Society has been housed at 991 Fifth Avenue for more than 80 years.

The American Irish Historical Society (AIHS) board will be replaced and an interim board will be created to manage the organization's affairs, New York Attorney General Letitia James announced today, December 19.

"Irish Americans have contributed so much to New York’s past and present," James said in a statement on Monday.

"For decades, the American Irish Historical Society has been a home for the Irish American community to celebrate and honor their culture and traditions. The new interim Executive Director and Board of Directors will bring critical oversight to help restore this important organization and ensure it thrives for generations to come."

The decision means that the Cahill family, headed by the late Dr. Kevin Cahill, will have no role on the new AIHS board bringing a 40-year association to an end.

The Irish government has welcomed the move stating that they would work with the new board to ensure a successful transition.

A new interim Executive Director and interim Board of Directors have been appointed to guide the AIHS through a six-month period of transition, with the Irish Consulate in New York supporting the interim board during the transition period.

The interim board will work with the office of the Attorney General and the Irish-American community in New York to ensure the revitalization of one of the most important Irish institutions in the city.

John MacIntosh, Managing Partner at SeaChange Capital Partners, which helps non-profits work through complex challenges, and Gregory P. Pressman, Of Counsel at Schulte Roth and Zabel, also join as interim members of the Board of Directors.

All interim members are joining in a voluntary capacity.

In a statement, the Consulate General of Ireland in New York welcomed the decision to overhaul the AIHS board, stating that the society is a historic symbol of the relationship between Ireland and the US.

"We are very pleased to see a plan in place to revitalize the Society and preserve the organization’s headquarters in New York City," the Consulate General said in a statement.

"The AIHS headquarters on Fifth Avenue is an iconic emblem of Ireland in New York. Its loss would have been keenly felt by the community in New York and beyond. The Consulate General of Ireland wishes to express its gratitude to Attorney General James and her team for their support of this solution aimed at setting the Society on a sustainable path."

The AIHS, housed at 991 Fifth Avenue opposite the Metropolitan Museum of Art, was first placed on the market in January 2021 with an asking price of $52 million, much to the dismay of the Irish-American community in New York.

Just over a year later in February 2022, four board members resigned after it emerged that the AIHS intended to abandon New York City for Cooperstown, a small town in Upstate New York with a population of roughly 2,000 people.

The AIHS also dropped the asking price of the Fifth Avenue building by $8 million to $44 million in February 2022 in an apparent attempt to facilitate a quicker sale.

The move upstate was backed by Michael D. Higgins Jr., the son of the current President of Ireland who was elected unopposed as the society's new President-General in February.

Higgins Jr. became President-General after less than one year on the AIHS board. He is a long-time friend of Dr. Kevin Cahill, who led the AIHS for 40 years and remains a powerful figure within the organization to this day.

Critics claimed last February that the Cahill family had too much control of the AIHS.

The New York Attorney General's office has been investigating the management of the society after an online petition to prevent the sale of the Fifth Avenue building was launched in February 2021, receiving more than 41,000 signatures.

New York Attorney General Letitia James formally addressed the potential sale of the AIHS on St. Patrick's Day in 2022, stating that the Fifth Avenue building has been a "focal point" of the Irish experience in the US for decades.

"Like so many New Yorkers, I know the importance of honoring the spirit of our cultural institutions. The American Irish Historical Society building on Fifth Avenue has been a focal point of the Irish experience in America for decades, and I take the recent concerns regarding the future of the building seriously," James said in a statement issued on St. Patrick's Day.

"We are vigilantly monitoring the situation, and I want to reassure Irish communities here and abroad that any potential transaction would not move forward without consent from my office or consent from the courts. Irish Americans are an integral part of the fabric of our nation, and we are better off because of their hard work, strength, compassion, and resilience.

"I firmly stand in support of the Irish American community and this historic landmark, on St. Patrick’s Day and every day.”

A month earlier, James issued subpoenas to key members of the AIHS following the resignation of four board members.

IrishCentral understands that two current board members and an AIHS employee were issued subpoenas as part of the investigation.

The Irish Government, which donated $1 million to the organization between 2008 and 2018 to fund "salary, operational, and programming costs", is believed to be considering its options after the AIHS announced plans to move upstate.

Minister for Foreign Affairs Simon Coveney described the sale of the building as a "deeply disappointing development" and called on the AIHS to keep its Fifth Avenue home.

The six-story townhouse has been the AIHS' headquarters since 1940 and is home to invaluable manuscripts, books, and historical artifacts.

Coveney called the headquarters, which houses a library and research facility with thousands of rare Irish books and documents, "a cherished symbol of the profound relationship that has grown between our two countries through the centuries".

The building has also hosted a wide variety of Irish events for decades, including concerts, plays, readings, and more.

The society now plans to move its headquarters to Cooperstown, roughly halfway between New York and Boston.

The town, which is home to the Baseball Hall of Fame, boasts a population of less than 2,000 people.

One former board member told IrishCentral that the decision to relocate the society "makes no sense".

"Who is going to drive three and a half hours to visit the society?  Or if a scholar wants to study the archives which are not digitized, they would have to drive 200 miles to get access. It makes no sense."