Last week the board of the American Irish Historical Society made a shock announcement that they were selling their majestic headquarters at 991 Fifth Avenue New York with an asking price of $52 million. The announcement shocked many including the Irish government. 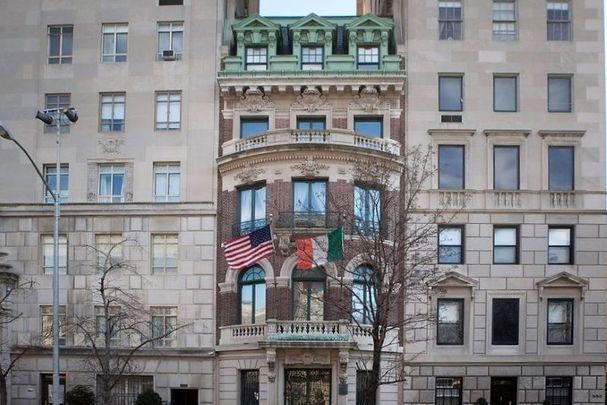 The American Irish Historical Society has been housed at 991 Fifth Avenue for more than 80 years.

There was one announcement last week that got the immediate attention of leaders in the Irish community like no other for a long time.

The press release from prestigious realtor Brown Harris and Stevens announcing that they were the agent for selling 991 Fifth Avenue, the home of the American Irish Historical Society (AIHS) and one of the last great mansions of the Gilded Age, came as a bolt from the blue.

The 991 Fifth Avenue address across from the Metropolitan Museum of Art is one of the best in New York and in a well-timed puff piece the Wall Street Journal property page immediately spread the word that a rare gem was coming on the market. The society, founded in 1897, has called the mansion home since 1940.

The asking price was said to be in the $52 million range for one of the most beautiful architectural buildings in New York City. (Full disclosure, I was a board member of AIHS for several years and left on good terms.)

The AIHS said through a spokesperson that "the decision to place the building on the market has been made in order to best enable the Society to pursue its cultural and scholarly mission in a sustainable manner.’

Read that as meaning the upkeep has become too great a burden and the intent must be to move to smaller premises.

It is no secret that like a lot of Irish organizations, the Historical Society has been hit hard by the pandemic, forced to cancel their end-of-year and very successful major black-tie dinner which was their reliable funding source and which may not take place this year either. In April, they began to solicit funds through GoFundMe.

But even before the current crisis, there was a massive restoration project in 2006-2008 that cost millions and which made the building safe to inhabit again but which resulted in major financial strain.

That restoration was carried out under the watchful eye of long-time President General  Doctor Kevin Cahill who commands great respect and remains a formidable figure in Irish American circles but who has his share of critics. They include some powerful former board members who disagreed with the direction of the society. Some of those former directors are contemplating legal action and researching whether a non-profit institution can be sold in this way.

The impact of a sale in Irish America will be deeply felt. Inside the marble halls are some of Irish history’s most compelling artifacts and documents. The documents they have in relation to the creation of the Irish Free State alone are priceless, especially concerning America’s role in that creation.

There are original letters and artifacts from Robert Emmet, Patrick Pearse, Charles Stewart Parnell, Michael Collins, and Eamon de Valera to name a few. There is an original copy of the first Irish language printing of the bible from 1685, a priceless artifact. In sum what the AIHS holds are by far the most historic works outside the island of Ireland. The library alone holds 10,000 books of great significance.

The immediate reaction of the Irish government opposing the sale was also unprecedented. Taken utterly by surprise, they immediately called for the sale to be halted and constructive talks about the future of the building and the AIHS to take place.

Their statement read: “.....The American Irish Historical Society, a registered not-for-profit organization, is a cherished symbol of the profound relationship that has grown between our two countries through the centuries.

"While the Society is more than its premises, the building on Fifth Avenue is an iconic emblem of Ireland in New York and a vital part of the infrastructure that underpins US-Ireland relations.

“We are concerned and disappointed to hear of the news that the Society intends to sell this building.

“We urge the Board of the AIHS to reconsider this decision, and we stand ready to engage in finding a constructive solution that meets the needs of the community and other stakeholders.”

The statement is very clear and not government-speak. Don’t sell.

Left unspoken was the fact that the Irish government has been a major donor to the Society as it faced turbulent times.

So what will happen to 991 Fifth Avenue and the society itself? Suffice to say the acrimony that is already there between opposing sides as to what the future should be is likely to continue, but the robust response by the Irish government shows they consider the building and the AIHS as one of the jewels in the crown of Irish America.

The concept of moving to a smaller space because of difficult times is one obvious solution to financial woes but losing 991 Fifth avenue, the finest Irish building in America, in the course of it appears to be a bridge too far for critics. The Irish community will have to see which way it plays out.