The Aisling Irish Center in the Irish enclave of Woodlawn / Yonkers is going above and beyond to make sure its community is well looked after during the COVID-19 pandemic. 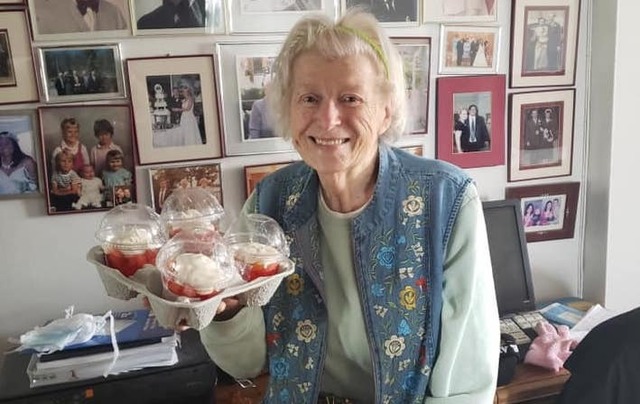 A member of the Aisling Irish Center's 'Young at Heart' group receiving a meal delivery organized by the community center.

The Aisling Irish Center is more active than ever in the face of the coronavirus pandemic.

Though the indices of the mortality and morbidity of the pandemic continue to decline, the Aisling Irish Community Center (AICC) in Yonkers, in conjunction with the other major Irish organizations, continues to address the harsh economic fallout that has befell the Irish community.

Read More: How one priest is guiding an Irish enclave in New York through the coronavirus crisis

During the week I spoke with Sandra Feeney-Charles, executive director of the AICC, about the unprecedented challenges the pandemic foisted upon the center. She poignantly chronicled the dramatic changes that completely altered the surefire operations of the AICC.

She stated that from early March, more than 90 Young at Heart seniors were looking forward to enjoying their St. Patrick’s Day celebration in a local establishment with entertainment provided by Mary Courtney, and a special appearance from the young AICC ceili band and ballad group. The musicians had practiced diligently for months and prepared for the many performances that were to take place in the spirit of Irish culture for the weeks ahead.

But on the night that New York Governor Andrew Cuomo announced that social distancing was to be rigorously enforced in response to Covid-19, all plans to celebrate Irish culture and heritage came to a screeching halt. The doors of the Aisling Center closed just like many other establishments on McLean Avenue.

However, that didn’t mean the work of the community center stopped, or its mission abandoned or diluted. Far from it. Within a few short days, AICC staff was set up to work from home, and services returned.

Granted not quite as normal, but then not so much is normal these days. Still, the staff put a plan into action to reach out and assist as many of the Aisling community as possible.

According to Feeney-Charles, regular calls to check on seniors began immediately. Soon the center was scheduling twice-weekly delivery of hot meals to those who missed their regular visits to the center. It wasn’t the same as the regular Tuesday and Friday visits, and of course, chair-yoga was out the window, but the meals faithfully delivered by the volunteers proved a very welcome distraction.

Happy Monday everyone! 🤗 We’re going into our 6th week of meal delivery to our Young @ Heart Senior Group. We would...

Calls from the Aisling staff facilitated a welcome chat and a chance to air some things that might need a helping hand. Understanding the anxiety that comes with these uncertain and stressful times, the AICC social worker moved her counseling sessions to video conference and phone calls and set up a new email address, SocialWorker@AislingCenter.org, for anyone that felt the need to reach out for the first time.

Feeney-Charles noted that amidst all of this, the ceili band and ballad group continued to practice. Regular weekly classes were taking place on Zoom. And of course, there is Sláinte 2020, which has morphed into a massive cooperative effort, involving the Aisling Center along with the New York GAA, United Irish Counties Association, the Emerald Isle Immigration Center, and the New York Irish Center.

To date, this group has raised over $300,000, and duly disbursed to families and individuals in dire need. It’s a phenomenal achievement.

Great credit is due to Caitriona Clarke, the chairperson of the Board of Directors of the AICC, and also to her husband Seamus, who devised the framework for this fundraising initiative.

Feeney-Charles stressed that with the overwhelming number of applications to Sláinte 2020 comes the realization that so many are out of work, need help with bills, groceries, and rent, and they don’t know when the crisis will end. She stressed that it is heartbreaking to see so many families and individuals suffering and struggling.

Feeney-Charles is perspicuous to know that the situation can’t be changed for everybody, but was emphatic in saying, “We’ll do what we can for as long as we can.”

The harsh reality is that the funds raised are almost all allocated, and at a certain point it can become disheartening. Then the despairing clouds lift when you get inspiring news from the captains of Team Aisling that they are launching an appeal for a virtual 5k.

Team Aisling and Slainte 2020 are inviting ALL Irish and Irish Americans living throughout the world to participate in...

So when you don’t know where the next dollar is coming from, a promise of $40,000 helps you realize the importance of Team Aisling in the Irish community. Not only is this an entirely volunteer-driven team focused on individual physical and mental well-being, but they care about the social connection of community. And now, the support that the Irish community traditionally provided for our fellow Irish in times of need proves true once again in the spirit of Team Aisling.

From Queens, right up through Manhattan and the Bronx, throughout Yonkers and all the way to Rockland and beyond, members of Team Aisling are gearing up for the mother of all 5ks.

Read More: Irish dad’s diary in New York during a time of COVID

Two years ago Team Aisling was born, the brainchild of Catherine Flood, who realized that the Yonkers Marathon was on life support and badly needed a transfusion of new energy and fresh bodies. The former Monaghan athlete succeeded admirably, not just by swelling the ranks of the runners, but also getting the Aisling brand out there.

Flood signed up 300 runners the first year, and that increased to 600 the following year. If this were a corporate entity it would be regarded as a takeover, and the Yonkers Marathon would now be called the Aisling Marathon.

Team Aisling has since been organized into a fully-fledged running club, with its philosophy encapsulated in the 4Fs -- fun, fitness, friendship, and fundraising. With the running club’s feet firmly on the ground, Flood handed off the administration to her trusted lieutenant Breda Carroll.

As a duck takes to water, Carroll’s brigade of runners was popping up in races all over the tri-state area as well as in marathons across the globe.  When New York became the epicenter of the pandemic, running races was prohibited. Team Aisling was devastated as they were devoid of their favorite fix, namely the endorphins that induce that sense of euphoria in committed runners.

Well as I said in another column, they were like a rebel without a cause. However, they soon found one -- Sláinte 2020.

Seamus Keane, the Queens fitness guru, put forward the notion of a virtual 5k, and the runners were like the ducks back in the water again. The beauty of the virtual 5k was that it allowed for plenty of flexibility, creativity, and individual discretion while adhering to the restrictions regarding assemblies.

Individuals could run/walk as much as they wished over the month of May with the culmination of the virtual 5K on Sunday, May 31.  Of course, it’s not just solely about cranking out miles, but runs/races have enormous potential to raise money. So basically Team Aisling members have a two-fold mission here-- run as much as you wish and gain as much sponsorship from your exertions as you can.

Now as a member of Team Aisling I want to make you an offer you can’t refuse – well, at least it won’t be as catastrophic as in the Godfather movie if you refuse. Anyway, there’ll be no equine heads rolling around.

The fact that Team Aisling is over 600 strong, and there is a great opportunity here to raise substantial funds for a very deserving cause if most make an effort. If you haven’t moved a limb so far, please do so, and solicit your next of kin, family, friends, acquaintances and any perceived soft touches to sponsor you.

Secondly, if you are under the weather, do as Mark Twain was alleged to have done when he got the urge to exercise -- namely, lie down and wait till it passes. If that is the case, do so, but give a few bob to some of the others who are out plodding the pavements. You’ll have done your bit for a very needy cause.

Speaking of doing your bit, apparently some have already done plenty of bits. Patricia McGovern has four half marathons under her belt, and Team Aisling chairperson Carroll is set to match that. Flood is reported to be ready to crank out a marathon at the crack of dawn next Sunday. Others such as Michelle Doherty and Elaine Heaney have been clocking up miles like the odometer on a car.

Phil Traynor, a great supporter of the Aisling Center and also a major sponsor, is reported to have retrieved his singlet, shorts, and spikes from the attic and is set to deliver a personal best on the track. He has been locked down in a trying camp under the strict supervision of his daughter Courtney, undergoing a rigorous regimen that would test the resolve of the toughest Trappist monk. Could this be the comeback of the century for the Monaghan man?

Yours truly is also returning to the hilly streets of Yonkers for a half marathon for the first major run after having a knee reconditioned for my birthday at the end of January. The warranty is for either a 100 miles or 100 days, but my mechanic has advised me to carry a can of WD40 in my hydration belt, just in case there might be a problem with the hydraulics.

Not everybody is running.  Caitriona Clarke has been relentlessly building up stamina on her bike on the arduous hills of Yonkers, while feverishly following training tips from Lance Armstrong’s training manual. This could be the breakout event for the rising star in the Peloton, and the golf clubs could soon be consigned to the basement.

This weekend, the Aisling Center will certainly be proud of the efforts of Team Aisling in putting their feet to the ground on behalf on Sláinte 2020. Kudos to Tracy Ely-Dwyer and all the team captains throughout the tri-state area who coordinated this inspiring and rewarding venture.

All donations to Sláinte 2020 will be greatly appreciated, but more importantly, will help alleviate some of the financial hardship that unfortunately is widespread in our community.  Visit the Aisling Irish Center's website and Facebook page for more details.