Counting, homeschooling, and reflections as we try to Dad as best we can and feel blessed for the honor. 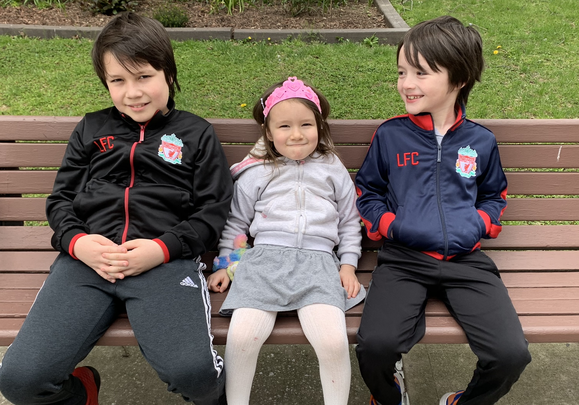 Three children, one Queens apartment, a lot of counting, electronic devices, and gratitude as this Irish dad battle's COVID with his family.

My daughter counts to 30 when washing her hands.  Once she gets there, she may segue into singing Happy Birthday to herself.  This is a recent tradition in our New York home, during this, the era of “the new normal.”

Singing while hand washing, they all do it.  Pop stars, athletes, her teacher from the school she can’t attend.

She still sees and hears her teacher of course, as well as her little friends via a screen but, as she tells us, she can’t hold their hands. That’s what counts to an almost-five-year-old. Virtual hugs are new, but certainly not normal.

Read more: How one priest is guiding an Irish enclave in New York through the coronavirus crisis

We, her parents, and her two older brothers who attend the same school, just a half-mile walk from our Queens apartment, also count. For the boys, it’s the minutes remaining in “school,” so they can return to their electronic devices.  After all, time away from Fortnite, Roblox and Minecraft is time simply wasted. Right?

Last Monday morning I counted too but stopped when I got to 14.  It was too high a number for so early in the day.

Fourteen was more than simply a figure. It was a statistic of sorts, and a depressing, unsettling one, at that. Before the kids were awake, prior to preparing another day of “homeschooling,” I’d either seen or heard, 14 ambulances whizz by our home.

That’s 14 local New Yorkers, a special breed, supposedly known for their tenacity, spirit, and attitude, in dire need of hospitalization. With the city being the current epicenter of the global pandemic that is COVID-19 and the coronavirus, one just knows that they’re not rushing to hospital following a workplace accident, domestic incident, or sporting injury. For a New Yorker to call the emergency services, it really must be, well, an emergency.

Sirens are part of life here. My boys used to be fascinated with fire trucks and would be overjoyed when firefighters waved back as the gleaming red trucks sped by.

Their mom, my wife, is no stranger to sirens either, regularly accompanying sick babies as they’re transported from other less-equipped hospitals to the one she works at, via ambulance, in her capacity as a nurse practitioner, overseeing the wellness of prematurely-born babies, during this time of great crisis.

Then there’s me. A stay-at-home-dad/writer, staying at home, and “dadding” a little more these days, writing a lot less.  Monitoring our three kids’ homeschooling, switching between the coloring-in of pictures of dinosaurs, to nine-times tables, to biographies of Washington, Lincoln, and Kennedy, while always checking there isn’t a Fortnite game going ahead, or a clip of Dan TDM being viewed on YouTube.

They’re used to it all, Fiona and her brothers, Liam and Emmett (friends joke that their Mammy didn’t get a look-in when names were decided upon).  All three were born in a hospital in Hell’s Kitchen, a neighborhood on Manhattan’s (formerly wild) West Side, a district far from the birthplace of their Californian mother, and their father, who first saw the light of day at Dublin’s Rotunda Hospital.

Read more: COVID-19 is exposing every crack in New York

New York City’s still alive though. Public transport runs, just at a slower pace. One can see the bus drivers’ faces as they ease down streets and avenues. There’s a look of uncertainty, fear even.

Worry that the next passenger to get on, do they or don’t they? Can they tell someone without a face mask not to get on? The few passengers who do still ride sit far apart.

It’s not like before, back home even, on a Dublin Bus, or even a CIE vehicle in previous eras, when the “bold boys” would be the ones at the back, making noise, sneaking a smoke even. Now, it might be an elderly lady, practicing her social distancing, traveling the few blocks just to view the hospital her husband was taken to. To pace outside, to pray, or give a silent, lonely goodbye, in this highly-unwelcome new normal.

The subways, the veins that keep New York City’s vital organs connected, alive and operational, are restricted too. New measures introduced by the state’s governor, Andrew Cuomo, have led to their being closed for several hours each night, for cleaning and disinfecting. Those most affected are the rarely forgotten but often neglected city dwellers, the homeless, who in recent months have seemingly moved into the trains, setting up their meager possessions in subway cars running from the Bronx to Brooklyn.

We’ve been hit hard, so there’s no escaping it. It’s not like times past when we could skip over the front pages and immerse ourselves in the sports section because, well, there are none.

The city that never sleeps is a city that’s standing still.

Where there has been continued New York-based activity is on Hart Island. A tiny landmass, situated northeast of The Bronx.

Since the late 19th century, it’s been used as a Potters Field Cemetery, where those without next of kin or financial means, or indeed, those found deceased with no ID, are buried. There are over 1 million “at rest” there, with approximately 1,500 burials occurring annually, all in mass graves, none marked with headstones or memorials.

Recently there has been a little hysteria concerning mass graves being dug there as if it was something happening solely due to the coronavirus. It’s not. This goes on year-round and has done, since the 1860s.

Naturally, with a higher death rate in the city due to the virus (so high that many funeral homes across the city can take no more referrals until the situation eases), there will be more burials there, and at every other cemetery, but this is not a new scenario, simply a continuing one.

The current mood in New York City is similar in some ways, yet different in others, to that which enveloped the city following the last great tragedy to befall the five boroughs. That was 19 years ago, when the World Trade Center fell, and this writer was on his way to Manhattan, to photograph and document what he, and many others, initially thought, was a passenger plane simply, and tragically, veering disastrously off-course, hitting lower Manhattan. How wrong we were.

Two-thousand-nine-hundred-and-ninety-six people, mostly New Yorkers, perished on that day, the darkest in U.S. history. As of press time, the coronavirus’s death tally for New York City had eclipsed that figure five times over.

With 9/11, many knew someone, but most knew of somebody who’d died.  A co-worker’s cousin perhaps, a neighbor’s nephew, a spouse’s childhood pal.

With the virus and today’s situation, a degree of separation has been removed.  Suddenly, everyone knows at least someone directly affected, often greatly so.

There is, as there always is, a bright, or at least less dark side, to such tragedy. New York, as cliched an idea as it is, comes together during times of such sadness and fear. Temporary, monuments, some hastily made, other more ambitious projects, dedicated to the bravery of the city’s frontline staff, have begun springing up throughout the city.

The banging of pots and pans has evolved to Frank Sinatra’s paean to the city, “New York, New York,” playing over loudspeakers, musicians and singers, jamming along, playing in their courtyards, on their balconies and their fire escapes, just for a few minutes, to thank some, remember others, and keep the city that never sleeps from taking a nap.

My daughter still counts. She sings Happy Birthday to herself too. Perhaps when her birthday arrives, she’ll be able to hug her friends again.

See, this is New York.  If we can make it here, well, we might just make it anywhere.

* Mike Fitzpatrick is an Irish writer living in New York City. He has written for many publications, both in Ireland and the U.S., and has had several plays produced in New York. He is currently working on a collection of short stories and one of true-crime pieces. He can be contacted at mikefitznyc@gmail.com.