New York GAA Senior Footballers will run 1,000km in 24 hours in aid of Sláinte 2020, a fund to assist those facing financial difficulties during COVID-19. 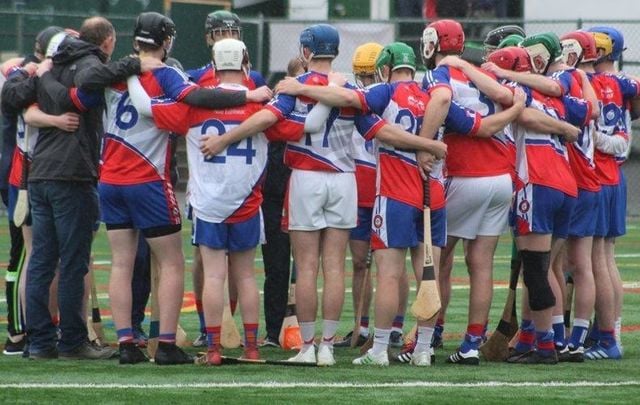 If you are a member of the tri-state GAA family, you would be excused if recently you felt a bit disoriented and a bit of dissonance as something appeared to be missing from our neighborhoods.

With almost the regularity of the migratory birds, and as the evenings lengthened and temperatures crept up, players with their O’Neills kit bags assembled on various street corners and designated pick-up spots before heading to their training locations. Well, the birds have returned to their spring habitats, but the Gaelic players are conspicuously absent from their designated locations.

The various training spots have been off-limits to the Big Apple hurlers and footballers, and Gaelic Park will be a forlorn spot on Sunday, May 3.

This will be in sharp contrast to previous years when the GAA hosted the first round of the Connacht Championship on the first Sunday of every May, with bumper crowds as the faithful followers of the visiting team matched their wit and passion with that of the Big Apple’s vociferous supporters.

For over 20 years, since New York was adopted by Connacht, the match off-Broadway bookended the quest for the Sam Maguire Cup that began in early May and ended in late September. This year Gaelic Park will have the appearance of a ghost estate.

Meanwhile, the New York footballers were reportedly doing well in anticipation of their clash with Galway on May 3.  However, with the game canceled, New York is not going to stand idly by and regret missing their big day.

And as regards big days, Johnny Glynn, the current trainer of New York, has had plenty of them.  He is a big man in every sense of the word. He was a key part of the Galway team when they hoisted the Liam MacCarthy Cup in 2017.

Indeed, a good indicator of Glynn’s stature was that the Tribesmen saw fit to have him commute across the Atlantic to train and play in his last few seasons wearing the maroon jersey. His traveling gave new meaning to the term global village.

Glynn’s prowess is not just limited to the small ball; he has also played for the Big Apple footballers, plus he was a pivotal player on the Sligo team last year that won the New York Senior Championship.

Glynn is adamant that the panel’s fitness efforts should not go to waste, and hence he came forward with the idea for a 1,000K run. The New York footballers and their management will run for Team Sláinte on May 3.

“New York GAA is so proud of their senior players who would have been taking on Galway May 3rd. Instead they will now...

Read more: TUNE IN - Move it Monday with the Shannon Gaels GAA!

Sláinte 2020 consists of the five not for profit main Irish groups: the Emerald Isle Immigration Center, the United Irish Counties Association, the New York Irish Center, the Aisling Irish Community Center, and all three boards of the New York GAA. These five groups have banded together to solicit and distribute funds to those suffering financial hardship due to the economic shut-down in the tri-state area.

Their motto is Ni neart go chur le chéile: no strength without unity. This 1,000K run is a wonderful opportunity for the New York GAA to show solidarity and support for those suffering financial distress, and also to generate badly needed funds to alleviate the resultant hardship.

While the main manifestation of the GAA has been its games, the organization has always been about much more than that. It is an inherent part of the Irish consciousness and has always played an influential role far beyond the playing fields.

The organization provides a sense of belonging to a community working together for the greater good, based on a value system and ethos that have their roots in core Christian precepts. Pithy Irish expressions have been frequently used to encapsulate unique or idiosyncratic aspects of Irish culture, and one in particular comes to mind here: Ar scáth a chéile a mhaireann na daoine  -- people live in each other’s shadows, or basically, we rely on each other, and that interdependence has always been a hallmark of the GAA.

Joan Henchy, New York GAA chairperson, said it was heart-rending and gut-wrenching to read some of the anguished appeals that have been made to Sláinte 2020 for assistance. Indeed, I can vouch for this as one father confided to me that he had already pilfered his kids’ Communion and Confirmation moneys and even the coin jar to put the basic food requirements on the table.

According to the Sláinte 2020 Steering Committee, claims are pouring in and these have been validated and vetted as real families and individuals with dire needs.  The idea is to maximize the fundraising capability of the 1,000K, and I would make a few suggestions.

First, there are almost 60 clubs in the tri-state area between the Senior Board, the Minor Board, and the Ladies Board, and I would suggest that each club donate $1,000 to Sláinte 2020. Some may balk at that, while others might claim that it might not be feasible.

However, let me point out a few things.  I have been involved with four clubs over the last 50 years in New York and I have a fairly good idea of how money is amassed and spent.

Many of us spent -- or perhaps wasted might be a better word in some cases -- plenty of club money to pay for summer players’ fares, accommodation, etc. I assure you $1,000 didn’t go very far in these situations, and truth be told there was often little appreciation for the thousands spent looking after some of these spoiled players.

I assure you that $1,000, or any sum of money, whether big or small, donated to Sláinte 2020, will be well spent and greatly appreciated.

Secondly, I would like to see the GAA folks, whether they are players, supporters, officials, or acquaintances of the GAA fraternity, donate in the name of their favorite player, past or present, in memory of a family member or friend.

I would also like to point out that generally, we are very adept at fundraisers for our particular teams or clubs. We sell raffle tickets, trade horses for nights at the races, cajole journal ads, and inveigle people to go to our dinner dances.

Many of these people who have faithfully and generously supported our efforts are now in financial difficulty through no fault of their own. Unemployment checks and stimulus money for many of those entitled have not arrived, really making a bad situation worse.

With 26 million joining the unemployment ranks the system is in a logjam, while there are reports that it could be September before some of the stimulus money arrives. To compound the hardship, some are not even eligible for any government assistance.

The current situation is totally unprecedented, and the fact that the economy was so summarily shut down, there was no time for a contingency plan. Granted there were layoffs, slow-downs, recessions, and depressions before, but there was usually an underground economy that helped some of those adversely affected until the storm blew over.

In many ways, the Irish are in the eye of this devastating economic storm as the bar and restaurant business and nonessential construction are in complete lockdown. The stress and the economic hardships are further exacerbated by the uncertainty of an opening date and the possibility that some of these smaller operations may be permanently shuttered.

That’s the grim reality and the uncertain future that many of our generous patrons and loyal supporters face. So, folks, I’m asking you to help these people in this terrible and unprecedented crisis.

Your good deeds will not go unnoticed or unappreciated. It’s very easy to feel smug when we're are ensconced in our comfortable abodes with a regular flow of income. I wonder how many of us would feel comfortable if we were devoid of our typical revenue stream for a few months and no end in sight for this precarious pecuniary position? I think you know the answer.

Meanwhile, the plan is to have a collective effort by the New York management joined by the senior football panel and also players from the development squad to run 1,000 kilometers over the next weekend.  Naturally, due to the social distancing regulations, the players can run in a typical race format, but modern technologies will be able to track and report on each individual effort.

Gerry Fox, the manager, will be cranking out kilometers along with the rest of the management team that includes Glynn, Johnny McGeeney, Brian Henry, Marie Geraghty, Dermot Yorke, Sean Kelly, Brian Henry, and Cormac McCormack.