Irish farmers fear that they will bear the main brunt of the Irish Government's Climate Action Plan and consequently pay the highest price. 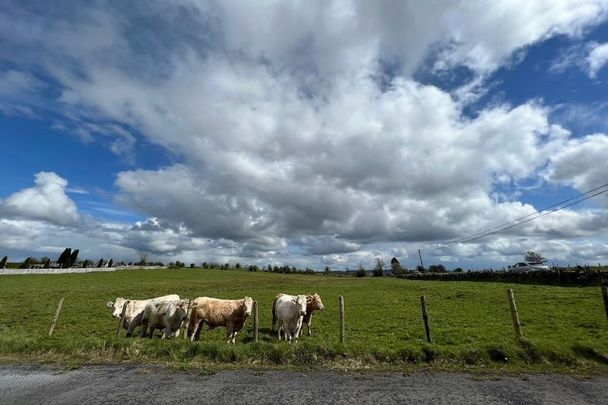 A herd of cows in Co Sligo. RollingNews.ie

In November of last year, the Irish government set out its Climate Action Plan to reduce greenhouse gas emissions (GHG) by 51 percent by the year 2030. It was a broad-brush document, more aspirational than practical, and lacking specific targets for the various economic sectors.

Those details came last week with sectoral emissions ceilings set for the energy, transport, construction, industry, and agriculture sectors. An accompanying press statement from the government said that we need to “be the generation to turn the tide on climate change.”

Lofty words indeed, especially for an administration that has consistently undershot climate goals. The statement received a mixed reaction; for environmentalists, it was a politically expedient and potentially illegal plan, while for those identified as having to significantly change behavior and work practices it went too far too fast.

In overall terms, Ireland releases about 61 million tons of greenhouse gases each year, roughly broken down into 38 million tons from energy (electricity, heat, and transport) and 22 million tons from agriculture. Apart from agriculture, emission reductions would be met with targets for energy efficiency including retrofitting half a million homes, electric vehicles (nearly one million), electric heating (more than 600,000 heat pumps), and renewable electricity (70 percent of electricity from renewable sources) by 2030.

While all sectors have been given targets, the fear among farmers is that they will bear the main brunt of the changes and will consequently pay the highest price.

Emissions in the agriculture sector were mainly methane from livestock, the use of nitrogen fertilizer, and manure management. The sector is now expected to reduce this output by 25 percent, a task farm leaders said would deal a “potentially devastating blow” to their members and to the rural economy. The Irish Farmers Association, an organization with over 72,000 members, said that the cuts were “all about the survival of the government rather than survival of rural Ireland.”

And it is true to say that disagreements within the cabinet between the Green Party on one hand and Fianna Fáil and Fine Gael on the other as to the level of GHG reductions did put enormous stress on the stability of the government. They survived by proposing what some call a massive fudge, while others call it “climate fraud” as ministers signed off on a composite target that was actually eight percent short of what they had stated was necessary.

This, according to the chair of the government’s own Climate Change Advisory Council, Marie Donnelly, was “problematic for a number of reasons.” She said that the sectoral emissions ceilings announced come to a total reduction of 43 percent, which fell short of the aim of reaching 51 percent by 2030. Consequently, this was “not consistent” with legislation that set legally binding targets for Ireland to reduce its emissions.

While the language used in the whole debate speaks to scientific certainty, the reality is that there is more than a fair share of smoke and mirrors as to how emissions and reductions are calculated. Each country has its own methodology which is generally finessed to suit its own agenda and, in that respect, Ireland had options when it came to agriculture but chose to ignore them.

For instance, while farmers are being encouraged to plant trees, install solar panels to generate electricity, and convert farm waste into gas, these measures are not considered as part of the GHG reduction figures for the sector as only less production is counted. This is leading to a fractious and divisive debate around farming practices and specifically the culling of herds of cattle.

Demonizing farmers and portraying them in a bad light is a tactic that suits politicians who represent mainly urban constituencies. It is also setting up fall guys for what most predict will be another climate policy failure. Sadly the debate is littered with examples of bad faith.

Those who have the most to lose are the young farmers, many educated and trained in sustainable farming practices. John Keane, the president of their association, Macra Na Feirme, pulled no punches in a recent statement where he emphasized how young farmers are the frontline environmentalists, and that what is needed is a significant investment in technology and succession pathways for young people to develop as active farmers.

He further stated, “The real issue to tackle in the emissions discussions is to increase the number of young people actively farming. Currently, there are more farmers on walking sticks over the age of 80 than there are under the age of 35. More active farmers under 35 will drive emissions reductions and improve farm practices. Investment is needed by the government in improved farm practices and tangible pathways to farm succession for young people.”

Macra Na Feirme has also highlighted inconsistencies between European and Irish governmental ambition and many of the policies currently in place which have caused confusion.

One of the main problems that has not been addressed is the continuing worldwide growth in demand for beef, so we have a case where Food Wise 2025, the Irish government’s blueprint for the food industry, is encouraging additional production of beef while other government departments are looking for major cutbacks. Market analysts are pretty clear that any fall-off in the availability of Irish beef will be taken up by South American – specifically Brazilian and Argentinian – beef.

The European Union, while insisting on meat production cutbacks, has agreed on the Mercosur trade deal which will increase beef imports from South America. It’s a case of supporting an industry that is less sustainable than Irish farming and, in the case of Brazilian agriculture, responsible for mass deforestation in the Amazon, one of the world’s most important carbon sinks. This really is an example of climate hypocrisy.

While the science and politics in relation to GHG are fuzzy, the impacts of global warming are real and the Irish climate is changing in line with global trends. Our Environmental Protection Agency (EPA) has estimated that the number of warm days is expected to increase, with heat waves occurring more frequently and the number of frost days lessening.

Significant reductions are expected in average levels of annual, spring, and summer rainfall offset, however, by a substantial increase in the frequency of heavy rain events in winter and autumn.

In relation to sea rise, the EPA points out that all major cities in Ireland are in coastal locations subject to tides and that the forecast significant rise in sea levels will have major economic, social and environmental impacts.

So, there is a lot at stake and no room for political expediency, climate fraud, confusion, or hypocrisy. Ireland will not solve this problem on its own, but whatever hope we have of surviving the probable climate storms if we pull together, we will have no chance if we tear ourselves apart and set one sector against another, young against old, city versus country. But who can we trust?

*This column first appeared in the August 10 edition of the weekly Irish Voice newspaper, sister publication to IrishCentral. Michael O'Dowd is brothers with Niall O'Dowd, founder of the Irish Voice and IrishCentral.