The Dáil saw country mouse pitted against town mouse, figuratively speaking of course, in what the opposition said was a cultural war over the rural way of life but which the government claimed was a public health matter. 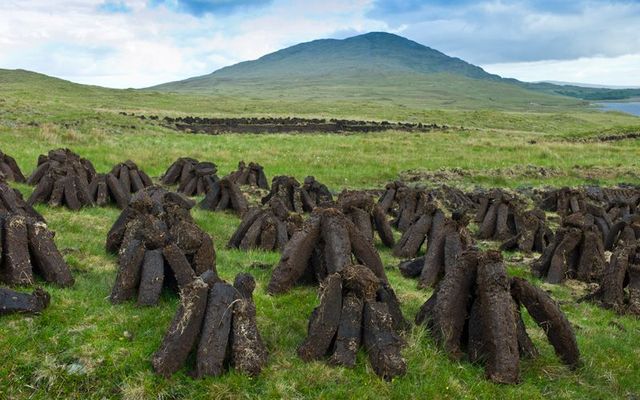 Having survived Brexit and the pandemic, it was the more mundane issue of sods of turf that nearly brought the Irish government to its knees this past week.

The Dáil saw country mouse pitted against town mouse, figuratively speaking of course, in what the opposition said was a cultural war over the rural way of life but which the government claimed was a public health matter.

Environment minister and leader of the Green Party Eamon Ryan was painted as the villain of the piece in this pantomime, which was frankly a mixture of climbing on bandwagons by one side and inept communications by the other.

First though a bit of context.  Turf in Ireland refers to peat, decayed organic matter that has accumulated over thousands of years in bogs around the country.  For centuries our ancestors dug up the sods, dried them, and burned them for fuel.

Many homeowners in rural areas still have an area of bog and will use this turf to supplement other forms of solid fuel heating.  To them, it is an important part of Irish culture and national identity and it’s what passes for fuel self-sufficiency.

Excess turf is then sold to neighbors or in local stores, offering a modest income stream.  There are also commercial operations that harvest the turf and sell it commercially.

So, when Ryan announced in early April that he was going to introduce an outright ban on the selling of turf, alarm bells rang in rural Ireland.

His rationale for the ban was that the Environmental Protection Agency (EPA) in a report in November 2021 stated that there are “an estimated 1,300 premature deaths in Ireland per year due to levels of fine particles in our air. Levels of this pollutant are of growing concern and are particularly high during the winter months when people’s use of solid fuels such as coal, turf, and wood impacts negatively on-air quality.”

Turf, therefore, has been identified as one of the culprits but by no means the only one that causes premature deaths. Nevertheless, the government continued to use the 1,300 figure in association with turf, which was at best disingenuous.

An immediate problem for the government was the timing of Ryan’s announcement. From May 1 of this year the government, as part of the strategy to establish a climate-neutral economy by 2050, raised the rate of carbon taxes on home heating fuels.

The increase comes as households across the country struggle to make ends meet with inflation hitting a 20-year high leading to the cost of basic essentials such as fuel, food, and housing spiraling upwards. A fill of heating oil that in January cost $420 prior to the increase was costing in the region of $730.

Add in the uncertainty created by the war in Ukraine and it’s little wonder that in the run-up to the imposition of these charges there were widespread calls for the tax hikes to be delayed as well as a rescinding of the ban on turf sales.

For those who owned bogs and had a right to cut the turf, this seemed like a double whammy – increased costs to heat your home and the outlawing of turf sales.  For those relying on cheap turf for heating, they were also deeply unhappy with the proposal.

Another major issue for the government was its own incompetence in managing the message in relation to the ban.   Ryan initially said that the ban was going ahead; then the leader of Fine Gael Leo Varadkar said the ban was being paused, only for Ryan to contradict him and say that was not the case and was not being paused.

The government did not know if it was coming or going, a hopeless position to be in if you wish to bring the public with you and implement policy changes.

Then to add to the confusion, grannies were thrown into the mix.  It was suggested that if a granny bought or sold turf, she would be committing a criminal offense. The image of elderly ladies in handcuffs prompted Ryan to declare that the government would not put anyone’s “granny in prison for burning turf.”

Such statements added more fuel (proverbial in this case) to the fire.  The opposition parties figured they had the government on the run, and Sinn Fein tabled a vote calling for a reversal of government policies on turf and on the carbon tax.

While government TDs had thrown shapes about bringing down the government in the lead up to the vote, with reports from the Fine Gael parliamentary meeting of the west of Ireland TDs “roaring” at Ryan who met them, they all supported the government position.

Little wonder really as the fact of the matter is that the turf war is not the cultural Armageddon its opponents wish to portray it as.  There will be no restrictions on people who own their own bogs and use turf in their domestic fire or share it with neighbors. There is no ban on the gifting of peat by those with the rights to harvest peat, and granny will not be thrown into jail. Limited sales will also be allowed.

This problem will be fixed but, in its wake, it has left some damaged reputations.

Fine Gael wobbled badly in the face of rural discontent. Its leader, Varadkar, was quoted as saying that removing turf cutting from rural Ireland is like removing wine from the French or pasta from the Italians. Yet such removal was never on the cards.

Sinn Fein, which has been desperately trying to burnish its green sustainability credentials, jettisoned them for short-term popularity. This will come back to bite them.  And a Labour Party senator fatuously stated that you can’t burn turf if you are underwater which totally missed the point of the proposed ban and added further to the confusion.

For the villain of the piece, Ryan, he comes out with a reputation enhanced. Despite having little support from government colleagues, he stood his ground and faced down his critics. Yes, there will be a compromise, but the core principle of improving air quality has been accepted.

And as for turf cutting itself.  Having tried it once on a west Clare landholding under a sweltering sun, I can vouch for the fact that it is difficult, tedious, and backbreaking work, and not the stuff of dreams and sentiment.

But then, in case you haven’t guessed, I am a town mouse.