Growing Media Ireland, the country's peat industry body, said this was the first time that horticultural peat had to be imported. 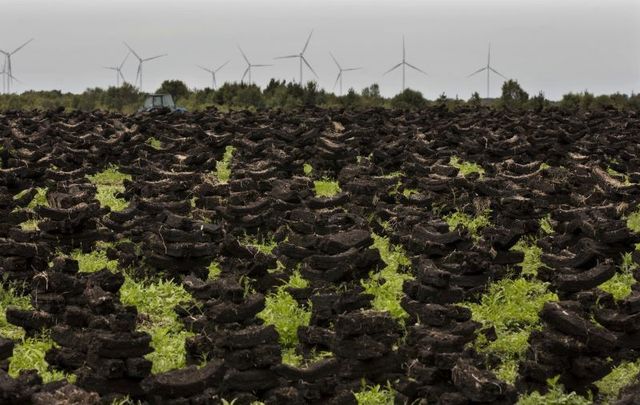 July 7, 2019: Saved turf (peat) drying out on the Bog of Allen in County Kildare, while in the background, the wind turbines at Mount Lucas are visible. RollingNews.ie

Get ready to accept the traditional image of a burning fire in Irish homes with turf produced from local bogs could vanish forever.

Instead, peat from places like Eastern Europe could be used where electricity and other forms of modern heating do not already warm Irish houses.

Ireland, long famed for generations of turf production, is now receiving shipments of foreign peat with national reserve stockpiles said to be exhausted.

The Irish Times has reported that some 3,600 tons of horticultural peat arrived from Latvia into Drogheda Port in Co. Louth on Saturday, where it was met by a fleet of 200 trucks.

The freight landed amid ongoing tensions between industry growers and the government following the cessation of commercial peat production in the wake of a 2019 High Court ruling.

Athlone-based Growing Media Ireland (GMI), the peat industry body, said Saturday’s large shipment of peat completed a 3,000-kilometer journey to reach its destination, compared with an average distance of about 10 kilometers when sourced from a Westmeath bog.

GMI said, “This is the first time this country has had to import horticultural peat with many scheduled shipments from the Baltic states and other EU countries expected over the coming weeks and months to supply Ireland’s horticultural sector.”

The material is used in the production of foodstuffs, notably mushrooms, soft fruits, and vegetables.

GMI represents the majority of commercial peat producers in Ireland, except the semi-state Bord na Mona which was founded in 1946.

The arrival of peat produce on ships is counter to generations of history and a tradition of localized harvesting that became industrialized in the 20th century through Bord na Móna.

Peatlands are now placed among the world’s most important ecosystems with a critical ability to capture carbon and help regulate climate.

In 2019, a High Court ruling held that legal aspects of regulations governing commercial production were inconsistent with European directives.

According to GMI, the ruling meant that harvesting peat from most Irish bogs effectively brought commercial harvesting to a close.

GMI chairman John Neenan said, “We estimate at least two shipments the size of what arrived in Ireland last week will be required each month to meet Ireland’s needs.

“It is a crazy scenario we are facing given horticultural peat is readily available and can be harvested in a sustainable, environmentally friendly manner in this country.”

Ireland’s horticultural sector is now seeking a “fair and workable” licensing system that would provide for the phasing-out of horticultural peat harvesting by 2030, when it could be replaced by alternative methods.

A final report from a working group to examine such alternatives is expected by the end of this month.