The earth moved! Amazing footage of peat slippage in Donegal

Dramatic footage of the incident was caught on camera and posted to social media. 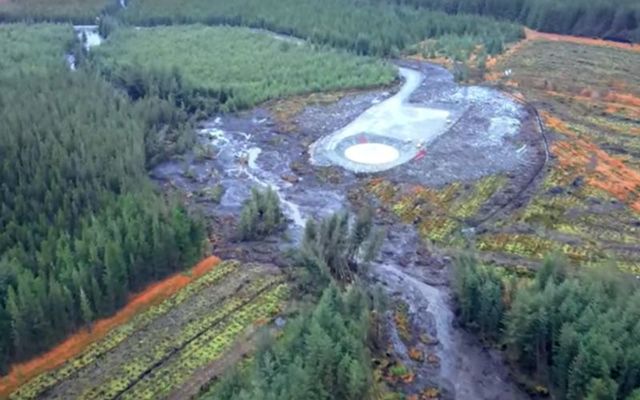 Aerial snapshot of the peat slippage in Donegal. YouTube/Derg Media

An entire landscape, including several mature trees, was seen rapidly sliding down a slope in Donegal.

The remarkable incident, which was seen by several witnesses and caught on camera, was the result of peat slippage at Meenbog Wind Farm, just south of Ballybofey, on Friday, November 13.

Dramatic footage of the landslide appeared on social media following the event.

According to the Daily Mail, there were no reports of injury or concerns that the local water supply could be affected.

However, “thousand of tons of material” were swept away during the landslide, impacting the rivers on both sides of the Tyrone/Donegal border, The Irish News reports. There are concerns the pollution could lead to a major fish kill.

Councillor Gary Doherty of Donegal County Council said: “There are serious questions about how this happened.”

The councillor said: “I’ve this morning requested an immediate stop on all works at the site until a full investigation is carried out and the full extent of the damage caused is known.”

The wind farm is owned by Invis Energy.

Authorities, including the Donegal County Council and The Loughs Agency, are investigating the incident.