Today is National Milk Chocolate Day! Plus it's Friday. What better way to celebrate than with a little chocolate and a little Guinness! 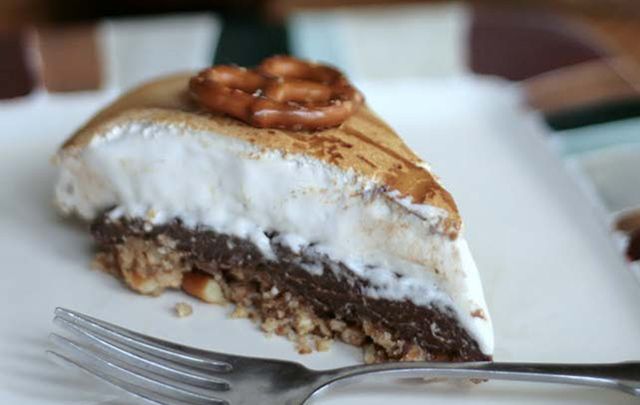 The perfect salty and sweet treat.

Today is National Milk Chocolate Day! Plus it's Friday. What better way to celebrate than with a little chocolate and a little Guinness!

Following on from Tayto’s release of the cheese and onion chocolate bar in Ireland we’ve realized that we are a nationality divided by whether putting salty and sweet together in a dessert is really disgusting or completely delicious.

Of course, there’s the obvious American favorite, the chocolate covered pretzel, more commonly known in Ireland as the brand Flipz, but then there are the breakaway groups who will break up a dairy milk chocolate bar and drop it into their popcorn at the cinema or even branch out and go for Galaxy Minstrels.

If you’re one such delinquent then we’ve found a most scrumptious recipe for you - Guinness chocolate pie with beer marshmallow meringue.

Thanks to SprinkleBake for this fabulous recipe. Makes two pies.

In a medium bowl, mix together pretzels, graham cracker crumbs, butter and brown sugar.  Stir together with a rubber spatula until well incorporated.

Whisk together egg yolks and sugar in a non-reactive bowl.

Pour 1 cup of Guinness in a heavy-bottomed 3-quart saucepan (reserve the rest for later use).

Set over medium-high heat and cook until very hot but not boiling.

Remove from heat and whisk in chocolate.

When chocolate has melted, whisk in the egg mixture in a very thin stream as to not scramble the egg.

Whisk in cornstarch and return to heat source.

Whisk over medium heat until thickened.

Use a rubber spatula to effectively remove all the pudding from the saucepan; quickly smooth the chocolate into the crust.  Refrigerate while making the marshmallow topping.

Whisk sugar, egg whites, water and salt together in a large metal bowl.

Set bowl over a simmering pan of water; whisk constantly until sugar dissolves and mixture is hot to the touch.

Remove bowl from simmering saucepan and stir in marshmallows pieces.

Let stand for 3-5 minutes until marshmallow pieces have softened.

Return bowl to simmering water and beat together using a hand-held mixer.

Continue to beat mixture until it has cooled slightly.

Divide mixture between two pie pans and place under broiler in oven.

Watch constantly - it's easy for the marshmallow to burn! Remove from oven when nice and toasty.