The perfect way to start a day - a full Irish breakfast

The traditional Irish breakfast incites memories of meals in kitchens that smell of freshly-cooked meats and baked bread. 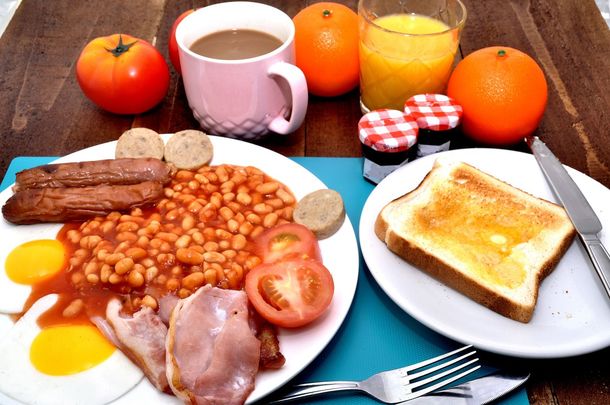 What could be better than a full Irish breakfast? Getty

The traditional Irish breakfast incites memories of meals in kitchens that smell of freshly-cooked meats, fried vegetables, and baked bread. It's the weekend!

Treat yourself and the family and whip up this delicious traditional treat.

Here are the top ten essentials:

Irish sausage – an amalgamation of freshly-ground beef or pork, seasoned with spices and layered with rusk – has cooked in the frying pans of households for centuries. Butchers fill collagen casings or pig intestines with the seasoned meat, whose mild and zesty flavor caters to palettes that routinely disfavor piquant foods.

How to cook: link, pan, or oven, until golden brown or slightly burnt.

Irish bacon, or rashers, refers typically to a cut of cured pork loin. Butcher shops inject it with a salt-based rind and allow the loin to soak in a barrel for two to three days. An alternative – streaky bacon – uses a cut along the pig’s belly or slab.

How to cook: slice, pan or oven, until golden brown.

Black pudding, or blood pudding, is a unique blend of blood, pork, rusk and seasonings; white pudding replaces blood with liver, though it remains similar in almost every other way. Puddings are blanched previously.

How to cook: slice, cook on a pan or in the oven, until crispy. 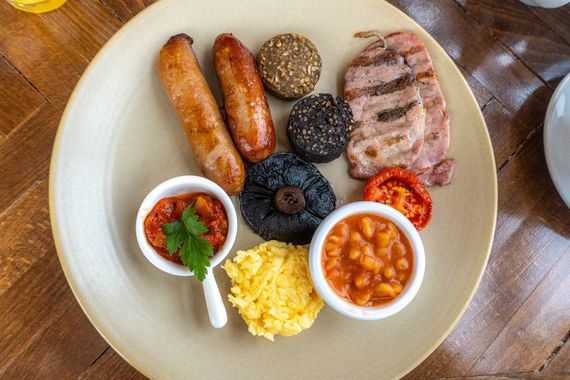 A fried egg also proves to be an essential for a traditional Irish breakfast.

How to cook: egg white and yolk, pan, until fried or scrambled.

Certain parts of Northern Ireland eat vegetable roll – a blend of seasoned beef, carrots, leeks, and onions – as a part of the Ulster Fry.

How to cook: slice, pan, until crispy.

Baked beans – a collection of navy beans stewed in a tomato sauce – can be purchased at local grocery stores from companies such as Bachelor's or Heinz.

How to cook: tin, pot or microwave, until hot.

How to cook: slice, pan, until golden brown. 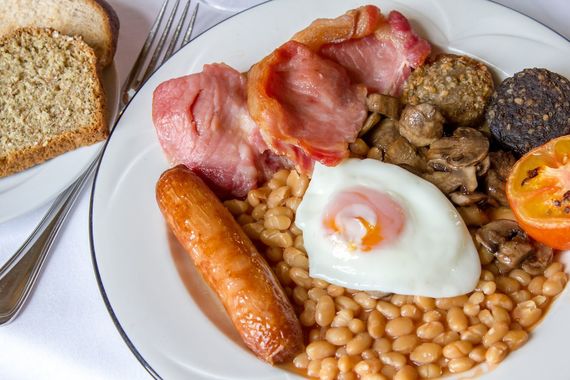 Fried mushrooms and tomatoes, salted for flavor, provide an interesting balance to the generous meat portions.

How to cook: slice, pan, until brown.

Brown bread, a frequent staple of Saint Patrick’s Day celebrations in the U.S., tastes great with butter, jam or marmalade.

How to prepare: slice, plate, until sufficiently topped with butter, jam or marmalade.

A cup of hot, freshly-brewed tea washes down the considerable breakfast and delivers a dose of caffeine to start one’s day.

How to prepare: cup, kettle, until teabag steeps.