LISTEN: Susan and Gerard by land, sea, and mountain

TAYSHT podcaster Mike Farragher catches up with married Irish musical duo Susan and Gerard about how they survived the pandemic and what's up next. 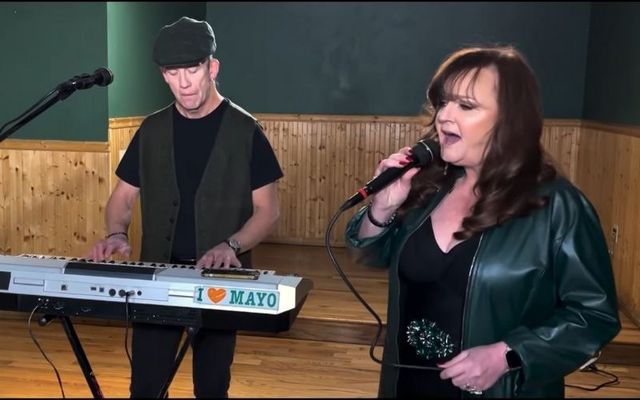 Though Susan Gillespie and Gerard Corbett have been playing their brand of southern fried Irish rock (a new category I just made up) for donkey’s years, I didn’t discover them until the pandemic. Tuning into Facebook live, the duo delivered from their living room the music we didn’t know we needed at the time.

The electro-techno-polka beat from the synthesizer.

The lonesome country honk lilt in the voice.

The playful ribbing between the (married) bandmates.

It conjured up remembrances of the soundtrack from the matchmaking festivals in Lisdoonvarna, the bands at the wedding receptions of my cousin’s weddings in and around Galway, the sticky sweet fleadhs of my summers in East Durham, and of course, the club scene we were so desperate for in our isolation.

The music clearly resonated with others in the same way. They amassed thousands of followers online and the e-tip jar filled up, sustaining the group through those tough times.

They charted singles like “If You Ever Change Your Mind” in the Irish country charts, and opportunities opened up to stage musical bus tours of Ireland and on an upcoming cruise later this year.

For now, you can catch Susan and Gerard in their natural house habitat: right here in New York. The duo has been working for many years along the banks of the Hudson River, from the bustle of Manhattan to the leafy suburbs of Yonkers to the mountainous terrain of the Catskills.

The rich soil of the mountains is where their music particularly blossoms—East Durham, to be exact. For those unfamiliar with the area, that soil is also deep with tangled roots of Irish American cultural experience. For thousands of middle-class Irish families like mine that were unable to afford a trip to the auld sod this year, East Durham was (and still is) a place to touch Irish soil on this side of the Atlantic through music, culture, and all manner of craic in the New York mountains.

Susan and Gerard will be tilling that cultural soil as they have over the last few summers, hosting fellow artisans as cultural directors for breakout house parties and bar band concerts throughout the village of East Durham.

On this episode of TAYSHT, we discuss the sumptuous wonder of an Irish Sunday roast and the band’s busy summer plans. To keep up with this fast-moving wildfire of a couple, check out their Susan and Gerard band Facebook page.

Check out the latest TAYSHT podcast, featuring Susan and Gerard, here and over on Spotify: