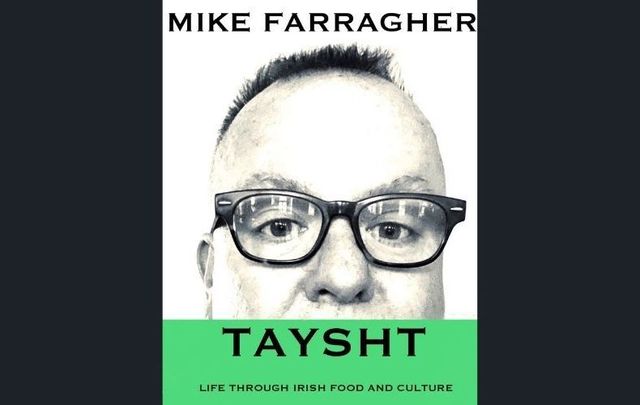 I’ve just put down the brilliant memoir masquerading as a cookbook, "Taste: My Life Through Food." It left me green with envy on many fronts: on Tucci’s elegant yet simple narrative and especially the way lush gourmet Italian meals his mother tucked in his school lunches and the tantalizing family dinner table spread remain etched in the author’s soul to this day.

Tucci’s upbringing could not be more different than mine, and that juxtaposition made me giggle as I looked back at how I was raised. I hope this makes you laugh as well, which is the goal of this mad capped idea called TAYSHT, a series of humorous essays exclusive to IrishCentral about growing up Irish, Catholic, and guilty in the swamps of New Jersey. We’ll spend just as much time looking back as we do gazing forward, with recipes from some of the top Irish and Irish American chefs currently elevating our culinary culture.

TAYSHT, because “s” is shushed in the west (wesht) of Ireland where my parents are from, is everything Tucci’s "Taste" is not because his family’s relationship with food could not be more different than that of a typical Irish family.

After speaking with the famous Irish and Irish American friends I amassed during my 25 years scribbling entertainment columns for the Irish Voice newspaper and IrishCentral, it turns out that style of Irish upbringing was not unique to my family households. I’ve captured those spirited conversations with musicians, writers, artists, playwrights, actors, and other “TAYSHT-makers” on the companion TAYSHT podcast, available on Spotify.

TAYSHT’s debut episode, which you can listen to below, captures a riotous conversation with the incomparable Joanie Madden of Cherish The Ladies, which finds us reminiscing about slurping McDonald’s Shamrock Shakes and discussing the tours and cruises on the horizon for Joanie and her legendary group.

You can listen to the first episode of TAYSHT, "Shamrock Shakes with Joanie Madden," here:

Now, endeavoring to compare Stanley Tucci’s dutiful chef of a mother with my own mammy and the aunties is obviously fraught with risk. For the sake of my own self-preservation, let me say here and now that, hand to God, there are no bad cooks in my family.

Every mother, aunt, and cousin has a specialty deserving of their rightful place on the menus of Dublin’s best gastropubs. The silky creaminess of Margaret’s mushy peas. The perfectly browned roasted root vegetables of my mother. The buttery mashed carrot and turnip mixture that shows up alongside Bridie’s sumptuous Sunday roast. The list goes on, and I hope to get to each one of them as this little literary caper progresses.

In reading Tucci’s memoir, it dawned on me that the Irish mammies in my family never appeared to have for one moment savored the creation or consumption of our dinners. While at times tasty and always highly nourishing, family meals were mere blasts of sustenance that one gets out of the way to get to the tay.

(Writer pauses to add “tay” to the Apple dictionary so he no longer gets the spelling error messages.)

There is no such thing as an appetizer course in my family, except for the occasional semi-frozen peeled shrimp ring my father and Uncle Tom horde at family gatherings and consume with the speed of inmates being escorted to the electric chair.

Irish families rarely linger over dirty dinner plates, which are cleared with the velocity of gangsters vacating the premises prior to being tipped off on a raid by the Feds. The savoring of a meal occurs over the tay. Ounces of tay turn to pints, then turn to gallons, which all add up to buckets and buckets of tay.

The brew of conversation during the tay is an acquired TAYSHT. All roads of the chat lead to the way things were.

The more colorful family members toiling the Irish soil generations before us.

The lenient modern parenting ways that do not meet the muster of the way things used to be handled.

The sibling palace intrigue whispered as the cuppa tay touches the lips.

With that explanation out of the way and establishing that the best part of an Irish meal is served with the tay, let’s start TAYSHT off with a scone recipe from Shaun Brady, the native from Nenagh, Co Tipperary who revolutionized Irish cuisine in the middle of the barbecue capital known as KCMO. I sampled this during my last trip to Kansas City and they are among the best scones I’ve ever eaten. Chef Shaun opens his new eatery, Brady & Fox, in KCMO this March.

In a small pot, add raisins, apple, and orange juice. Place on medium heat for a couple of minutes until raisins plump up. Set aside to cool down.

Combine all dry ingredients in a large mixing bowl.

Cut the butter into the mixed dried ingredients.

Mix whole egg and egg yolk to buttermilk mix together.

Mix wet and dry ingredients together - hold back some of the liquid, you might not need it all. Roll out to about 1/2 inch.